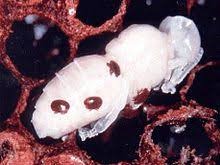 A local beekeeper’s new business has taken flight with an aim to help apiary aficionados and amateurs alike.

Just over a week ago, beekeeper and entrepreneur Erik Diemer celebrated the launch of his new business venture, Mite Fight, with a party at East Stroudsburg University’s Innovation Center.

Diemer, who graduated with a degree in business management from ESU just this past December, wasted no time in setting up a subscription service that he hopes will one day help save honeybee colonies across the country from a scourge that threatens their very existence.

“For beekeepers who are just starting out and they need help, or people who have smaller apiaries, what Mite Fight does is we send you three boxes a year – one in spring, summer and fall,” Diemer said. “Each box has a Varroa mite treatment that will help keep your colony healthier. Also, the boxes will include other supplements and things that you need for the bees in that season. In spring, for example, I’ll include ProDFM, which is a probiotic. I’ll also include a pollen substitute, which helps the bees build up earlier in the season.”

Instructional videos will also be a part of the package, Diemer said, offering step-by-step instructions on how to utilize the treatments and supplements, and information on how they work to protect the bees.

The notorious Varroa mite attacks bees by sucking their blood, transferring various diseases and viruses – such as the Deformed Wing Virus, which prevents honeybees’ wings from developing – that can spread throughout and destroy a colony.

Diemer said that while many people want to help bees, which are suffering population declines across the world, they may be woefully uninformed about the process and the level of expertise it requires, and that’s exactly who Mite Fight is for.

“Beekeepers starting out either have no clue that they need to treat for Varroa mites, or they know they need to treat but they really, really cannot figure out how to do it appropriately,” Diemer said. “Colonies that are left untreated will absolutely collapse in under two years.”

On the other hand, hives that are properly treated have a 20% better survival rate over the course of the winter, Diemer said.

“Colonies that are well-treated for Varroa mites produce about 30 pounds more honey on average,” Diemer said. “So if you have the average apiary for the people that I’m targeting – about three colonies – that’s almost 100 pounds more honey each year, simply because you’re keeping healthier bees.”