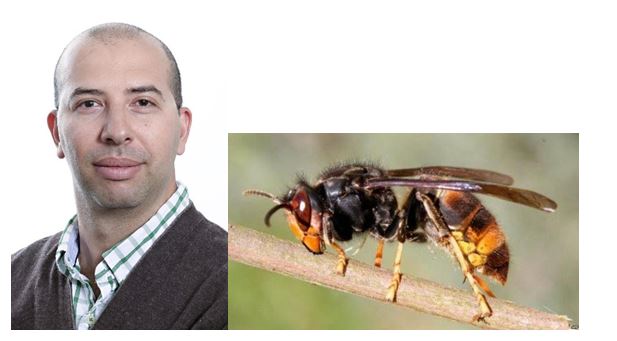 But the health of honey bees is declining, with more than a quarter of honey bee colonies dying each winter. These deaths have left beekeepers and government regulators struggling to find ways to quickly diagnose, manage and improve bee health.

The solution could be a new bee health diagnosis tool being created as part of a research project led by bee genomics expert Associate Professor Amro Zayed, of York University, along with Professor Leonard Foster, of the University of British Columbia. On October 1, they will launch a $10 million project to develop a new health assessment and diagnosis platform, supported by Ontario Genomics and Genome Canada.

“We need to think of innovative solutions to fix the bee health crisis. The current tools are just not cutting it,” said Zayed in the Department of Biology, Faculty of Science.

Honey bees produce 90 million pounds of honey each year and are needed to pollinate some of Canada’s most lucrative crops. Their pollination services are valued at $5.5 billion per year in Canada alone.

The causes of bee decline are complex, variable, and difficult to identify. But beekeepers and government regulators need to rapidly identify the stressors impacting specific populations before they can make changes to improve bee health. Currently, the industry uses post-mortem analysis to test for the presence of a few known pathogens or toxins in dead colonies. These tests are often expensive, time consuming, and provide an incomplete picture of the stressors affecting bee health.

The research team is looking to modernize the industry by delivering a tool to quickly assess bee health in living colonies that would allow loss-mitigating strategies to be implemented.

The researchers will use genomic tools to measure stressor-induced changes in bees to identify biomarkers for specific stressors. By the end of the project, the researchers envision a system where beekeepers can send their samples for biomarker testing and receive a report with both a health assessment and information on the most effective management strategies, which can then be applied in the field to improve the health of their colonies.

Dorset on the Front Line in Fight Against Asian Hornets

DORSET has been described as on the “front line” of the threat that Asian Hornets pose to bee colonies.

The British Beekeepers Association (BBKA) promoted Asian Hornet Week from September 9 to September 15 to raise awareness of the danger of these insects.

Asian Hornets are predators to flying insects, including honey bees, which has caused a problem for beekeepers in areas where they have been found. They have been causing trouble on the island of Jersey, and a few sightings have been reported on mainland Britain in recent years.

Beekeepers have raised concerns of the effect these hornets could have on the pollinator population.

Mark White, the Asian Hornet Action Team coordinator for Dorset, said: “Being the Channel Islands gateway, Dorset is very much on the front line in the fight against the Asians Hornets.

“Bees make up a substantial part of their diet. Anything that will fly, they will try and catch it in mid-flight and decapitate it.”

People who suffer from anaphylaxis should be aware that the stings from Asian Hornets can trigger an anaphylactic shock.

Anyone trying to identify an Asian Hornet should look for insects that can be up to 30mm in length for a queen and 25mm for a worker, have a mostly black body with a small yellow band near the rear and have yellow legs and an orange face with brown-red compound eyes.

Anne Rowberry, the BBKA’s Asian Hornet coordinator, said: “We are asking everyone to be vigilant in looking out for this alien species, the Asian Hornet, Vespa velutina. It could decimate our pollinators, including our honey bees, it is important to have everyone actively looking for it. It’s not just a beekeeping problem.

“Now is the time for trapping and spending a little more time watching to see if hornets are hawking your hives in your apiary, put an hour aside to watch each day for hornets during Asian Hornet week and remember to look for them on late sources of nectar like ivy.”

A BBKA spokesman said that risk of Asian Hornet nests drops considerably during the winter months, but is greater during summer and autumn.

People are implored to report any sightings of Asian Hornets, along with photographs, to alertnonnative@ceh.ac.uk

For more information about Asian Hornets and how to identify them, visit bbka.org.uk