PULLMAN, Wash. — Washington State University Provost Dan Bernardo didn’t break a sweat as a few thousand honey bees formed a beard on his face for a good cause. 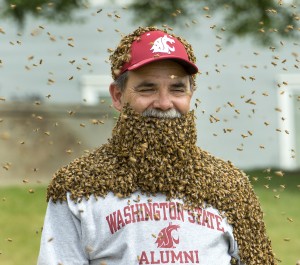 “Initially, there’s this scratchiness, sort of moving sensation,” Bernardo said. “It’s very noisy, maybe a little nerve-wracking. But I wasn’t nervous. We had paramedics and every bee expert within 1,000 miles here, so I figured I was in good hands.”

The event was part of a kick-off to the campaign to raise awareness of honey bee health and funding for a new Honey Bee and Pollinator Research Center at WSU.

Bernardo and Washington beekeeper Eric Olson have agreed to match all donations made to the campaign by June 30, up to $25,000.

Also standing for a bee beard was Paul Stamets, founder and president of Fungi Perfecti. Stamets, who has worked with WSU bee researchers on ways to use mycelia to help bees. At today’s event, Stamets donated $50,000 to the bee center to help kick off the campaign.

“I believe in the intelligence of nature,” Stamets said. “I study fungi, and I think using mushroom mycelium to help the bees will be key to saving them. We want to give back to bees what they give to us. I hope this small donation will go a long way to help the bees.”

The total cost of the facility will be $16 million, and the goal is to raise all of that money from private donations, meeting full construction cost-analysis obligations.

The 15,000-square-foot research facility will include a diagnostics lab, a cryogenic germplasm repository, a molecular lab and controlled atmosphere rooms, solving current space and research shortages. 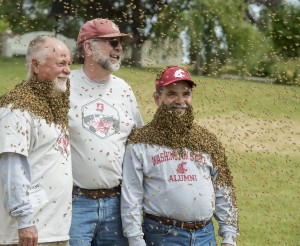 “Bees are vital to our food systems,” said Steve Sheppard, chair of the WSU Department of Entomology and bee scientist. “This building will help us better support colony health and improve Washington agriculture.”

In addition to research labs, the new building will include a screened observation area, allowing the public to watch bees in demonstration gardens. It will also include classrooms and instructional facilities, something the program currently lacks.

The facility will host visiting scientists from around the world, who come to Pullman to learn the latest techniques for cryogenic storage or to conduct research.

“Having a center like this will provide resources for honey bee research equal to those anywhere in the world,” Sheppard said. “We’re already doing great work, but having better facilities and equipment would give us a huge boost.”

The new center would be near the Eggert Family Organic Farm on the east side of the Pullman campus.

Visit http://bees.wsu.edu/ to learn more. Click on “Support the Facility” to make a donation.