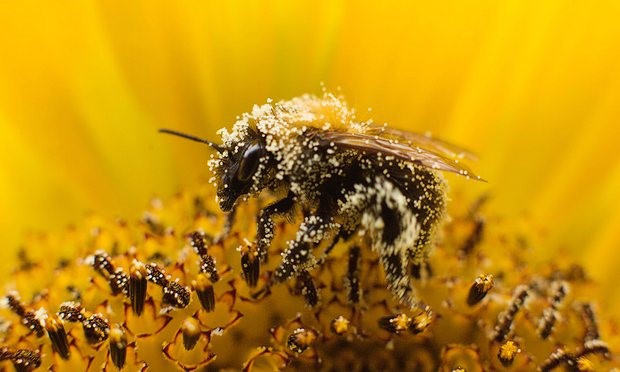 Neonicotinoid pesticides have been shown to be harmful to bees and were banned from use on flowering crops by the EU in 2013. Photograph: Michael Kooren/Reuters

Ministers have rejected an “emergency” application from the National Farmers Union (NFU) to use banned pesticides on a third of all oilseed rape crops.

Neonicotinoid pesticides have been shown to be harmful to bees and were banned from use on flowering crops by the EU in 2013, a move opposed by the UK government. But ministers granted a temporary lifting of the ban in 2015 after the NFU argued it was needed to fight the cabbage stem flea beetle (CSFB).

However the government’s scientific advisers said this year’s application, from the NFU and the Agriculture and Horticulture Development Board, should not be granted. Farming minister George Eustice then rejected the plan, the first time the government has ruled against neonicotinoid use.

The Expert Committee on Pesticides (ECP) said the application contained “insufficient information to ensure that use will be limited only to those areas where there is a danger or threat to plant protection and [did not] offer adequate assurance that the use will be controlled in an appropriate fashion”.

Matt Shardlow, chief executive of Buglife, said: “Oilseed rape yields went up by 7% last year – this is not an ‘emergency’, the loss of bees and pollinating insects is the emergency.

“The decision is great news for the bees and for the hundreds of thousands of British people who have asked the government to do more to protect our disappearing pollinators.”

“It is disappointing that the reasoning of the ECP in refusing to support the applications focuses more on technical issues relating to targeting and control, rather than the more obvious point that the confirmed risks of using these agrotoxins clearly outweigh the elusive claimed benefits,”  Shardlow said.