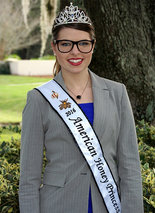 Tabitha Mansker, the 2016 American Honey Princess, will visit New Jersey July 26-29. She will be a guest of the Eastern Apicultural Society and will participate in its annual conference being held this year at Stockton University in Galloway Township. She will be a guest speaker and will participate in the Kids and Bees program, a hands-on, interactive, educational program sponsored by the American Beekeeping Federation for children of all ages.

Tabitha is the 20-year-old daughter of Gary and Wanda Mansker of Nevada, Texas.  She is pursuing studies in business and marketing and hopes to become a teacher. Tabitha stays busy helping to manage her family’s 16 hives of bees and extracting honey for many commercial beekeeping operations.

As the 2016 American Honey Princess, Tabitha serves as a national spokesperson on behalf of the American Beekeeping Federation, a trade organization representing beekeepers and honey producers throughout the United States. The Honey Queen and Princess speak and promote in venues nationwide, and, as such Mansker will travel throughout the United States in 2016. Prior to being selected as the American Honey Princess, Mansker served as the 2015 Texas Honey Queen.

The beekeeping industry touches the lives of every individual in our country. Honeybees are responsible for nearly one-third of our entire diet, in regards to the pollination services that they provide for a large majority of fruits, vegetables, nuts and legumes. This amounts to nearly $19 billion per year of direct value from honeybee pollination to United States agriculture.

By: Ross Conrad As we head into Autumn and reflect on the past beekeeping season, what criteria do we use to call it a…