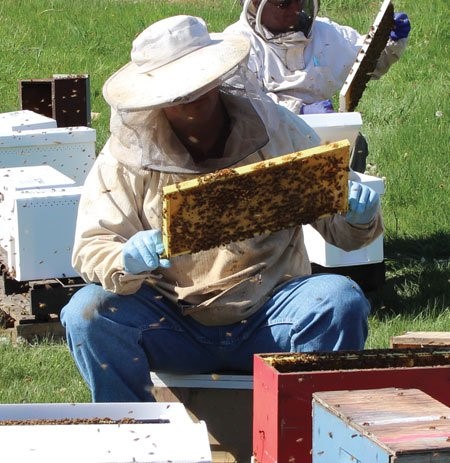 When the U.S. Food and Drug Administration (FDA)’s Veterinary Feed Directive (VFD) regulations take effect in January to combat overuse of antimicrobial drugs in food animals, veterinarians will be in charge of an uncommon patient: honey bees.

That’s right—honey bees are considered a food animal and will be subject to the same regulations as cows, chickens and other animals raised for food production. The antibiotics beekeepers use will no longer be available over the counter and will require a VFD order from a veterinarian to be administered.

With a rise in beekeeping’s popularity—especially in backyard hives—in the last few years, veterinary clinics may see increased calls to examine hives once the regulations take effect.

The FDA’s VFD regulations became final in 2013, allowing three years for the industry to come into compliance. They’re intended to change how antibiotics considered medically important in human medicine are used in food-producing animals in order to combat concerns of drug resistance. The FDA wants to eliminate the use of such drugs for things like growth promotion and feed efficiency and bring the therapeutic uses of these drugs under the supervision of licensed veterinarians. These changes are meant to ensure that antimicrobials are used only when appropriate for specific animal health purposes—and the veterinarian is the one who makes that call.

A VFD drug is one that is intended for use in or on animal feed under the supervision of a veterinarian. A combination VFD drug is a combination product that includes at least one VFD drug.

Why not a prescription?

A small subset of the industry

One of the diseases beekeepers use antibiotics to treat is American foulbrood (AFB). AFB is very hard to get rid of—the most effective way is to burn the hive—and spores can be reactivated as many as 70 years later. Antibiotics eliminate clinical signs of the disease, but if the treatment is stopped the disease can recur.

“Antibiotics are not something that a lot of people are using, but the big producers have been using them for several years to decrease signs of AFB. If they stop using antibiotics, and don’t get a veterinarian involved because of the new regulations, then there might be a big outbreak of AFB for some people,” says Chris Cripps, DVM, co-owner of Betterbee, the Northeast Center for Beekeeping. “An outbreak can be very frustrating and demoralizing. The beekeeper may just walk away from the bees, leaving them contagious to the other bees in the area. Then the rest of the community could be affected.”

Most commercial keepers know what AFB is and know to prevent or treat it, but less-experienced hobbyists may not, Cripps says. One source of infection can be secondhand beekeeping equipment, because the spores live for such a long time. Backyard keepers just starting out may think they’re getting a great deal when buying used equipment, but they run the risk of an AFB flare-up once a new hive starts up in contaminated equipment.

The Varroa mite is actually more of a concern than AFB, Cripps says. The mites carry viruses that can wipe out a hive. Hives require treatment to keep the pest under control, but those treatments are under Environmental Protection Agency regulations and are available over the counter.

“The mites were first found in 1987 and they have spread throughout the country since then. I’d bet that every beekeeper has mites, but maybe 1 percent have AFB,” he says.

People starting hives now because of the heightened awareness that the bee population is trouble are of the mindset that they want to help the environment. They aren’t looking to use antibiotics, Cripps says. They want to use as little chemical as possible on their hives.

An opportunity, not a burden

Though the new regulations mean more steps on the part of beekeeping clients and their veterinarians, there’s also an opportunity for education.

A lot of beekeeping regulation is handled by state inspectors who generally work in the plant side of the department of agriculture and not in the animal area, Cripps says. “Veterinarians and regulators will need to work with the USDA or the state veterinarian for some sort of marriage of the systems that the state uses for disease reporting—similar to how the state veterinarian tracks cattle inspections and health charts,” he says.

There’s an opportunity for veterinarians who already know about bees and beekeeping and who can handle hives and work bees to step up and help educate, Cripps says. He and the staff at Betterbee have been working to create Beevets.com, an online resource where veterinarians who are interested in bees can list their contact information and beekeepers can find veterinarians in their area.

“It’s interesting, because I thought I left practice as I started getting into bees, but there have been a lot of questions from veterinarians and beekeepers,” Cripps says.