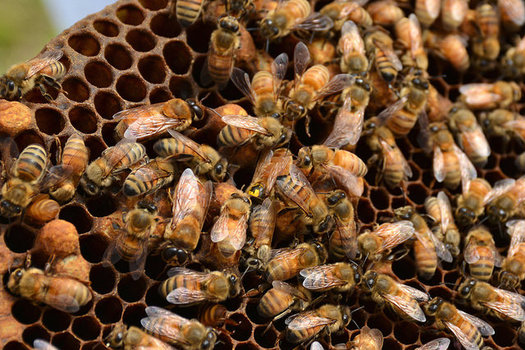 BISMARCK, N.D. – A group has chosen North Dakota to demonstrate and collect data on the best practices for managing bees, as the species faces diminishing numbers nationwide.

North Dakota’s choice for the Bee Integrated Demonstration Project by the Honey Bee Health Coalition is no surprise. The Peace Garden State is the nation’s leading honey producer.

Kasey Bitz, a farmer partnering on the Bee Integrated Demonstration Project, says it was also a no-brainer for him to partner with a local beekeeper on this project.

“What a great opportunity to take some of this land that’s a little less productive,” he says. “Straw prices aren’t where they used to be the last couple years, and this year with the drought our yields aren’t going to be as great. Why not take advantage of some of this low-producing areas and turn it into bee habit and work with a local beekeeper?”

In particular, the beekeepers and farmers are looking at strategies for managing pests like the varroa mite, the best flowering mixes to help foraging bees, and the best use of pesticides on crops near bee colonies.

The beekeeper and farmer partnership will run through 2020 and there are plans to add more pairs in 2018.

Julie Shapiro with the Honey Bee Health Coalition says the project will also be sharing any tips they find along the way with the beekeeping community at large.

“What we learn from that can help us translate it hopefully to more folks within the Bee Integrated project but also just broadly to the beekeeping and farming communities because ultimately the goal isn’t just to have a select set of farmer and beekeeper pairs working but to inspire others,” she explains.

Beekeepers lost 33 percent of their colonies between April 2016 and 2017, according to a survey by the Bee Informed Partnership. That decrease is smaller than in years past.