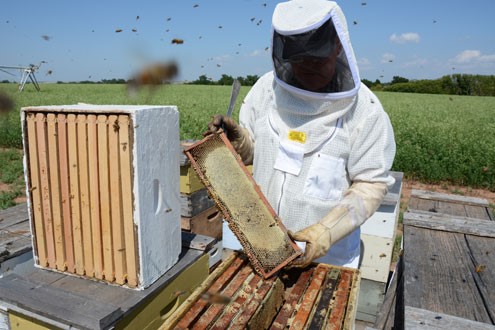 Silver River Sweet clover is a new Texas A&M variety available through Turner Seed Co. in Breckenridge, and Justin Seed Co. in Justin. The variety was developed through cooperative efforts by researchers at Texas A&M AgriLife Research and Extension centers in Overton, Beeville and Uvalde with the help of Texas A&M AgriLife Extension Service specialists in College Station.

Touchstone, who has been a beekeeper and honey producer since the mid-1980s, likes what he sees and smells. He recently delivered 68 bee colonies on multiple trailers staged around the field for pollination, which promotes seed production for the producer and honey by his bees.

The bees were active and the clover was giving off a sweet attractive aroma.

“This is the best field I’ve seen in a long, long time,” he said.

Contract grower Daniel Stephenson, of Camargo, Oklahoma, planted and manages the field and said it becomes whiter and more aromatic each day as the clover continues to bloom. It was planted Sept. 1, 2016 and was four to six weeks from harvest.

The seed harvested will allow the new Texas A&M sweet clover variety to be available to the public.

Dr. Gerald Smith, Texas A&M AgriLife Research legume and grass breeder in Overton, was the breeder for the new variety and said it was bred for resistance to rust. Smith said the variety was a great option for the high pH soils found in Central and South Texas, Oklahoma and portions of the Midwest.

“Silver River is a great multi-use sweet clover that is good for grazing cattle, livestock and wildlife, and bees love it,” he said. “It is also a good cover crop because it is a legume and can take nitrogen from the air through biological nitrogen fixation and infuses it into the soil. It is probably the best available legume variety adapted to Central and South Texas.”

Smith said Silver River is one of the first annual sweet clovers released in years and that its characteristics should make a big impact for beef cattle, livestock, wildlife and honey producers throughout Texas from Dallas to Brownsville, across Oklahoma and areas of the Midwest.

Touchstone said he could not yet gauge the expected honey output but the colonies were building up well and many had started honey production. His typical honey yield is around 230 pounds per colony on watermelon patches and other fields and orchards that are more common for honey production in the area.

He hopes the bees perform even better on the sweetclover.

“So much depends on the weather,” he said. “They are very active right now and we hope for dry days and maybe a little rain at night so there is some moisture on the plants as conditions warm and the bees become more active. But they are busy. They love it.”

Smith said he hopes the sweetclover performs well for Touchstone and that the variety becomes a popular variety for honey producers in the future. For now, he hopes the bee pollination efforts enhance seed production of his new variety.

Stephenson said he’s seen a mixed bag of seed sets so far but that the field has yet to hit peak bloom.

“The field gets whiter and whiter every day,” he said. “It’s not a bad field to come check on. We love the bees, and we love that smell. The air is just sweet. It smells like, well, like honey.”