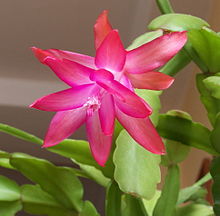 Embarrassing question? Too personal? Not at all — I’m just asking about that cascading plant so many of us have in our homes — the Christmas cactus. ‘Tis the season, and I thought a word or two about this popular houseplant might be in order.

It seems there is a lot of confusion and even irritation about this plant, usually stemming from the fact that, originally bought to bloom at Christmas, it insists on blooming at some other time entirely. Perhaps that is because what you actually have is a Thanksgiving cactus — or even an Easter cactus. First of all, don’t think of these as “desert style cactus.” Called epiphytes, they are really natives of the cool mountainous reaches of Brazil and live in conditions similar to what orchids like: shade and high humidity. They are often found in the forks of tree limbs, growing in the litter that accumulates there.

The genus Schlumberera includes both the Christmas cactus and the Thanksgiving cactus. The Easter cactus is in the genus Hatiora. So which one(s) do you have? Schlumbereras bloom white, pink, yellow, orange, red or purple. Hatioras have vivid scarlet blooms. Hmmm, not clear yet, right? Okay, Schlumbergera can be further divided by the color of pollen and stem segment shape (none of the plants have true leaves): those with yellow pollen typically have segments with pointed teeth and bloom earlier (can we say Thanksgiving?) than those with pink pollen and segments that are more rounded and symmetrical. (Think Christmas.).

Well, we could think that back in the early 1800s before hybridizers got into the act and began crossbreeding. By the 1860s, a large number of cultivars were available with a number of habits and flower colors. Collectively they were given the name Schlumbergera in honor of Frederic Schlumberger, a French collector. Easter cactus was included in the group at that time. Looking at my own: the two large ones both have rounded segments, but they are distinctly different shapes. One blooms light pink, the other dark. In the kitchen I have two little ones which for years have refused to grow much at all, have white blooms and pointy segments. All of them bloom quite randomly whenever they darn well feel like it!

I will say in my own defense that I do try to care for them properly. It’s not hard: any container soil will suit them but it needs to be well drained. They do want humidity, which you can achieve by filling a waterproof saucer with gravel then adding water to about half way up the gravel. Set your container on top, being careful not to have the pot sitting in the water, incurring root rot. Water thoroughly, then allow the top inch of soil to dry before watering again. Your cactus wants indirect sunlight and dislikes drafts. Feed with low nitrogen (the first number) liquid houseplant fertilizer from April through September. In warm weather you can set your cactus outside in the shade, but bring it back in when nights go down into the 50s. A word to the wise: it likes being crowded: don’t be in a hurry to re-pot.

Now, do you really want your cactus to bloom for a specific holiday? I have long ago made peace with this option, since the process is almost as picky as that for poinsettias. But if you must … A period of about 8 days with 16 hours of darkness at 61 degrees has been shown to cause flower buds to form. Even streetlights or car lights at night can interfere with the process, so that sounds like a closet to me. Then you encounter the problem of bud drop off the plant. My kitchen duo are famous for that. Lack of humidity, insufficient light, too much water — or not enough — can all cause it. Frankly, I just don’t worry about it. When we do get it right, what joy! What rejoicing! Serendipity!

By ZACK HUFFMAN Bayer Cropscience, the world’s largest agrochemical company, buckled to Massachusetts’ demand that it stop advertising that its neonicotinoid pesticides are like…