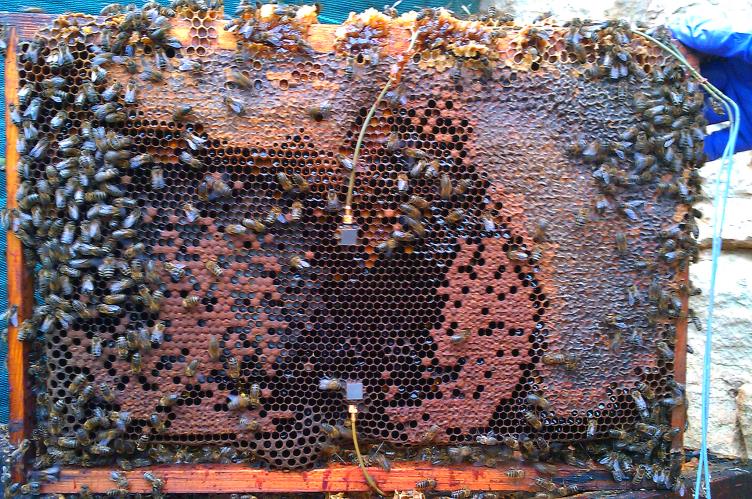 Scientists have just decoded another bit of honey bee speech, and the newfound “word” the bees are buzzing is “whoop.”

In a study published in the journal PLOS One, researchers with Nottingham Trent University (NTU) have learned that a particular honey bee vibration signal long presumed to be a warning about danger outside the hive might also be a kind of startle response, issued when the tiny fliers bump into each other in the hive.

Prior to the study, the signal was thought strictly to be used to silence a bee that was in the middle of telling the rest of the colony about a food source location. Honey bees communicate to each other about a new food supply – say, a field full of flowers – by performing a “waggle dance,” an elaborate combination of vibrations and body movements that tell other bees where the new food can be found and how far away it is.

Waggle dances are astonishingly accurate – able to indicate accurately to other bees the location of new food more than 6 kilometers (3.7 miles) away. The warning signal examined in the study is designed to stop the dances. Bees who get directions from the dance tend to leave the hive to go foraging, but if the location is considered a threat – other colony mates were attacked there, for example – the warning signal tells the waggler to please stop waggling so that everyone will stay home.

Now, though, it turns out that the warning signal may be the exceptional use rather than the rule. Through study of two in-the-wild hives and a manufactured observational hive, the NTU researchers were able to show that the signal happened too often and at the wrong times of day (at the evening, for example, when bees don’t waggle dance) to be purely a warning message to wagglers.

To listen in on all the chatter, the researchers rigged the hives with accelerometer sensors that continuously recorded vibrational frequency and amplitude throughout one year. Then, custom software allowed them to pore over the vibrations in search of meaningful pulses.

Meanwhile, the observational hive held a video camera that recorded bees in real-time with the vibrations they were making.

The team called its system the first to monitor successfully bee messages over a long period without being invasive to the colony.

Once all of the bee talk was examined, the researchers observed that the signal formerly thought of as a warning to wagglers was happening a lot.

“We have found that this signal is remarkably common, much more than previously thought,” said study co-author Martin Bencsik, NTU researcher and physicist, in a statement. He added, of the signal’s meaning: “We believe that in only a small number of instances is it used as an inhibitory [warning] signal and therefore have proposed a new name: the ‘whooping signal.'”

“Through our work we are expanding the understanding of honeybee communication,” added co-author Michael T. Ramsey. “This vibrational pulse was originally known as the ‘begging signal,’ as it was believed to be a request for food. Then it was thought to be a purely inhibitory ‘stop signal.’ Now we have taken this another step forward. It shows promise that our methods can be used as a sensitive way of monitoring and assessing colony status for these hugely important pollinators.”