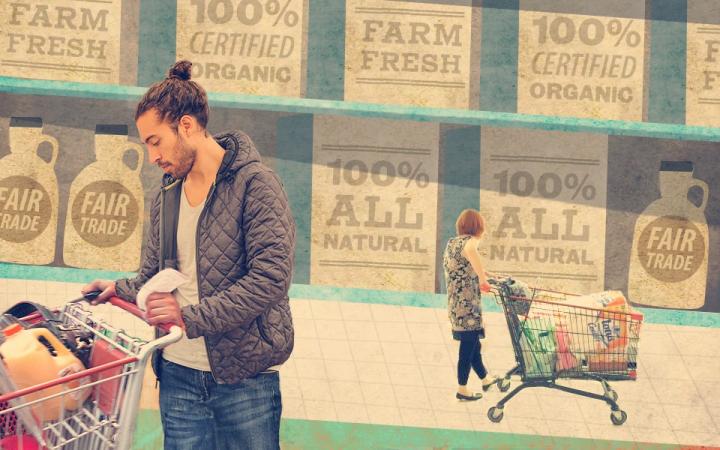 When customers walk down aisles of grocery stores, they are inundated with labels such as organic, fair-trade and cage free, just to name a few. Labels such as these may be eye-catching but are often free of any scientific basis and stigmatize many healthy foods, a new University of Delaware-led study found.

The paper published recently in the journal Applied Economics Perspectives and Policy examined the good, the bad and the ugly of food labeling to see how labels identifying the process in which food was produced positively and negatively influenced consumer behavior.

By reviewing over 90 academic studies on consumer response to process labels, the researchers found that while these labels satisfy consumer demand for quality assurances and can create value for both consumers and producers, misinterpretation is common and can stigmatize food produced by conventional processes even when there is no scientific evidence those foods cause harm.

For the poor, in particular, there is danger in misunderstanding which food items are safe, said Kent Messer, the study’s lead author and the Unidel Howard Cosgrove Career Development Chair for the Environment.

“That has me worried about the poor and those who are food insecure,” said Messer, who is also director of the Center for Experimental and Applied Economics in the College of Agriculture and Natural Resources. “Because now you’re trying to make everything a high-end food choice and frankly, we just want to have healthy food choices, we don’t need to have extra labels that scare away people,”

Process labels, by definition, focus on the production of a food, but largely ignore important outcomes of the process such as taste or healthiness. According to Messer and his study co-authors, policy changes could help consumers better understand their choices. They argue governments should not impose bans on process labels but rather encourage labels that help document how the processes affect important quality traits, such as calorie count.

“Relying on process labels alone, on the other hand, is a laissez faire approach that inevitably surrenders the educational component of labeling to mass media, the colorful array of opinion providers, and even food retailers, who may not always be honest brokers of information,” the researchers wrote.

With regards to the positive impact process labels have on consumers, Messer said that consumers are able to more freely align their purchasing decisions with their values and preferences.

If, for example, a consumer wants to buy fair trade coffee, they are able to do so with greater ease.

“The good part is that process labels can help bridge the trust between the producer and the consumer because it gives the consumer more insight into the market,” said Messer. “New products can be introduced this way, niche markets can be created, and consumers, in many cases, are willing to pay more for these products. It’s good for industry, consumers are getting what they want, and new players get to find ways of getting a higher price.”

The bad part is that consumers are already in the midst of a marketplace filled with information that can be overwhelming because of the sheer amount of product choices and information available.

In addition, when most consumers go to buy food, they are often crunched for time.

“Human choice tends to be worse when you put time constraints on it,” said Messer. “Maybe you’ve got a child in the aisle with you and now you’re adding this new label and there’s lots of misinterpretation of what it means. The natural label is a classic one which means very little, yet consumers assume it means more than it does. They think it means ‘No GMO’ but it doesn’t. They think it means it is ‘organic’ but it isn’t. This label is not helping them align their values to their food, and they’re paying a price premium but not getting what they wanted to buy.”

Messer said that another problem are “halo effects,” overly optimistic misinterpretation of what a label means.

“If you show consumers a chocolate bar that is labeled as ‘fair trade’, some will tell you that it has lower calories,” Messer said. “But the label is not about calories. Consumers do this frequently with the ‘organic’ label as they think it is healthy for the consumer. Organic practices may be healthier for the farm workers or the environment, but for the actual consumer, there’s very little evidence behind that. You’re getting lots of mixed, wrong messages out there.”

Like halo effects, the ugly side of food processing labels comes into play when labels sound like they have a positive impact but really have a negative one.

A label such as “low food miles” might sound nice but could actually be causing more harm than good.

Hot house tomatoes grown in Canada, for example, might have low food miles for Canadian consumers but it’s probably far better environmentally — because of all the energy expended in creating tomatoes in an energy intensive hot house in Canada — to grow the tomatoes in Florida and then ship them to Canada.

“If you just count miles and not true energy use, you can get people paying more money for something that’s actually going the opposite of what they wanted which is to get a lower carbon footprint,” said Messer.

He added that the ugly side of food labeling is that a lot of fear is being introduced into the marketplace that isn’t based on science.

“When you start labeling everything as ‘free of this’ such as ‘gluten free water,’ you can end up listing stuff that could never have been present in the food in the first place,” Messer said. “These ‘free of’ labels can cause unnecessary fear and cast the conventionally produced food in a harsh, negative light.”

Since the vast majority of the food market is still conventionally produced and is the lower cost product, there is a danger in taking that safe food and calling it unsafe because of a few new entrants into the food market.

Messer also said that there is evidence that food companies are getting worried about investing in science and technology because they don’t know how the consumer is going to respond or how marketers are going to attack their food product because it’s new and different and therefore, can be labeled as bad or dangerous.

“We’ve got a lot of mouths to feed in our country and around the world,” Messer said. “We are currently able to feed so many because of advances in agricultural science and technology. If we’re afraid of that now, we have a long-term impact on the poor that could be quite negative in our country and around the world. That’s when I start thinking these process labels could really be ugly.”