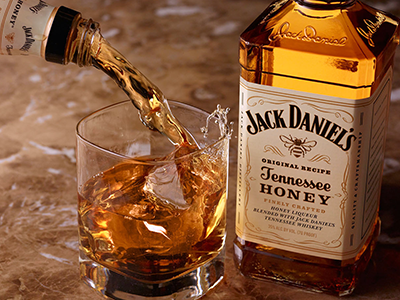 “I’m bringing home a baby bumblebee” is the classic song we know from childhood, but we’re taking an adult twist on the classic bumblebee that makes one of the sweetest and stickiest natural sugars: honey.

Bumblebees or rather honey bees are the only insects to produce an edible substance for humans. Honey is 17.1 percent water and 38.5 percent fructose, but rich in minerals and nutrients. It’s used in everything from skincare to the cocktails and liqueurs mentioned in this article.

At 70 proof, the honey is not dominant, but adds a sweet characteristic to a Jack Daniel’s classic. As Jack Daniel’s describes it, Tennessee Honey is “a little bit of honey and a whole lot of Jack.” Serve chilled over ice or add it to a cocktail such as Jack Honey Lemonade, a blend of Tennessee Honey and lemonade topped with a Cherry.

Wild Turkey American Honey Sting was another suggestion for a honey infused liqueur. With similar qualities to Jack Daniel’s, but 71 proof, there’s something that gives this liqueur a kick. It’s blended with honey and ghost pepper for a little heat during the summer.

However, if you’re looking for more natural uses for honey, incorporate tablespoons into your own cocktail. The Bee’s Knees (an old classic) and the Democrat (a modern twist) cocktail are a few ways to sweeten gin and whiskey based drinks.

The bee’s knees was slang for “the best” in the early 20th century during the prohibition era. To cover up the taste of “bathtub”, or just awful homemade gin, honey and lemon were added. In this case add your choice of gin, lemon juice, and the main ingredient honey syrup (a mix of honey and water) to create a tastier version of a 20th century Bee’s Knees.

Created by bartender Jon Santer in Emeryville, CA, the Democrat was inspired by 33rd president, Harry Truman. Truman often had cocktails on his back patio after a tiring day’s work. When Santer read this, he pictured the Southern Summer in a drink; peach liqueur, fresh lemon juice, honey syrup, and choice of bourbon. Specific measurements are listed below, but as a suggestion, mix with Buffalo Trace bourbon or even Sazerac Rye for a straight rye whiskey addition.

Whether you’re pouring straight over ice or preparing a mixed cocktail, honey provides a sweet compliment to whiskeys and gins. And don’t forget the many uses for honey because when the night is over, add a tablespoon to your morning breakfast oatmeal or toast to help banish last night’s hangover.