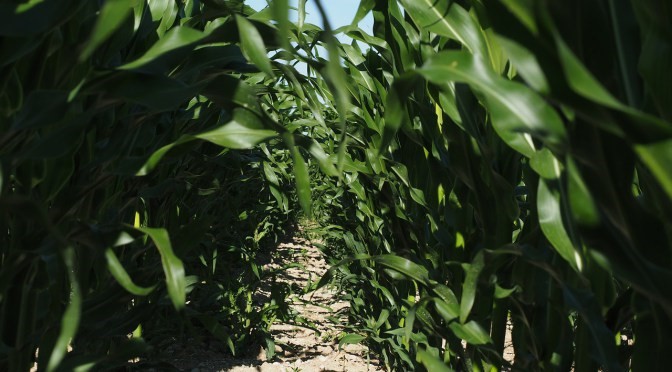 CRISPR (Clustered regularly-interspaced short palindromic repeats) Cas-9 is the most high profile gene-editing tool today and a technique that’s far more palatable to those adverse to  genetic modification, because it mirrors a natural-occurring procedure. CRISPR basically uses a similar mechanism that living organisms use when repairing damaged DNA, snipping out unwanted fragments, and replacing or reorganizing what is left behind. Because this method does not introduce any foreign DNA, as some GMO technology does, it is arguably an advanced breeding method that could occur in nature over several years of evolution. Therefore, it’s not subjected to the same levels of regulatory scrutiny that traditional GMO technology has been in the past.

This is a breakthrough not only from a biology standpoint, but also from a regulatory standpoint, as the US Department of Agriculture confirmed that the process does not require regulatory approval. A CRISPR-edited corn variety developed by DuPont Pioneer is one example of a gene-edited crop that was not subjected to USDA regulations, and there are more examples.

The director of Switzerland’s Research Institute of Organic Farming has made a statement in favour of CRISPR, shocking many NGOs and lobby groups of organic agriculture. Even the Chinese Government, renowned for its opposition to GMOs, is getting on board indicating a willingness to embrace CRISPR in contrast to their antipathy toward transgenic GM technology.

CRISPR was named 2015’s Breakthrough of the Year by the American Association for the Advancement of Science’s journal Science. And in 2014 and 2016, it made MIT’s list of the top 10 technologies; in the realm of life sciences, this is big news.

The human health industry is currently the focus of a large amount of money and resources going into CRISPR technology today as it could stand to cure genetic defects and illnesses in people, such as cancer, Alzheimer’s, cystic fibrosis, AIDS and more simply by snipping and removing DNA.

But it is gathering pace in the agriculture industry and there’s clear potential for its application in healthcare to cross over into agriculture. Since last year, Bayer has been building up its CRISPR capabilities and in August 2016 it signed an agreement with CRISPR Therapeutics through its LifeScience Center unit to invest $335 million in a joint venture named Casebia Therapeutics.

The joint venture combines two areas: CRISPR-Cas9 from CRISPR Therapeutics as well as protein engineering and disease know-how by Bayer.

Through the JV, Bayer has secured exclusive rights to use CRISPR Therapeutics’ and the JV’s proprietary CRISPR-Cas9 technology and intellectual property in the three targeted disease areas, including blood disorders, blindness, and congenital heart diseases.

CRISPR Therapeutics may gain exclusive access to Bayer’s protein engineering know-how for use in CRISPR products as well as Bayer’s extensive expertise and knowledge in the three targeted disease areas. Newly created know-how from the collaboration beyond the three disease areas will be exclusively made available to CRISPR Therapeutics for human use, and to Bayer for non-human use, such as agricultural applications. Hence Bayer will command any research and know-how to do with agriculture. Add on Monsanto, the biggest producer of agricultural biotechnology, and the route to market is suddenly clear.

Monsanto has focused on other gene-editing tools, which it was initially using for genetic modification purposes – i.e. to precisely insert foreign genes into crops for beneficial traits, rather than put them in lots of places and then sort through them as was done previously. This year it signed two agreements, one with TargetGene and another with Nomad Bioscience. Under a merger with Bayer, Monsanto could potentially have an armory of the latest gene editing tools at its disposal, and there could be scope to replace its GMO product portfolio with products from gene-editing tools, simultaneously increasing yields and pleasing the organic movement.

The tie-up will give the new company control of more than 25% of the world’s supply of seeds and pesticides. It will also mean a close tie-up between the originator of genetically-modified seeds with the founders of CRISPR technology. It should be noted the 25% share refers to the value covered by Monsanto branded products, the actual acreage of crops planted with biotechnology commanding royalties to Monsanto is a lot higher.

Bayer is not the only horse in the CRISPR race, however; we know other agricultural companies are looking at CRISPR. DuPont Pioneer already has a product on the market based on this technology as mentioned earlier and has partnered with Caribou Biosciences, which earlier this year raised $30 million in Series B funding.

But acquiring Monsanto will catapult Bayer to be the leading biotechnology provider producing the world’s food. Bayer’s and Monsanto’s combined biotechnology capability will be immense and their geographic spread will be very global; Bayer’s dominant market is in Europe and Monsanto’s in the Americas.

The only real threat to their global agricultural domination are the market regulators. This is now the third mega ag consolidation, first Dow-DuPont, then Syngenta-ChemChina and now lastly Bayer-Monsanto. This last acquisition is potentially the most radical and profound, but could be the hardest to realize.