Provided by: University of Technology, Sydney 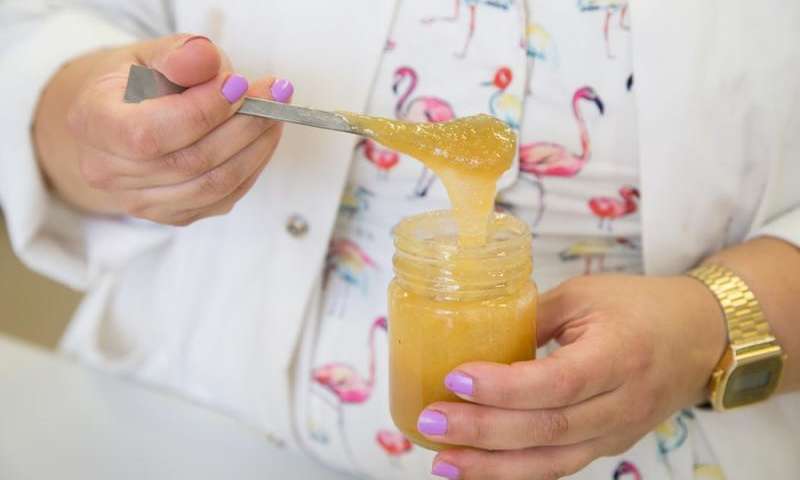 A UTS researcher with manuka honey in the lab. Credit: Vanessa Valenzuela Davie

Australian manuka honey is at least as powerful against bacteria as the more commonly known New Zealand variety, researchers have found.

A team led by Professor Liz Harry at UTS has studied more than 80 honey samples from NSW and Queensland flowering manuka (Leptospermum) trees and found the nectar-derived chemical that gives NZ manuka honey its unique antibacterial properties is present in Australian varieties.

“These findings put Australian manuka honey on the international radar at a time when antibiotic resistance is recognised as a global crisis,” said Dr Nural Cokcetin, of the ithree institute at UTS, a lead author of the study which also includes collaborators at the University of Sydney and the University of the Sunshine Coast.

“All honeys have different flavours and medicinal properties, depending on the flowers bees visit for nectar. What makes manuka honey so special is the exceptionally high level of stable antibacterial activity that arises from a naturally occurring compound in the nectar of manuka flowers. It’s the ingredient we know acts against golden staph and other superbugs resistant to current antibiotics.

“Our study provides the proof for what we’ve long assumed – that this compound, methylglyoxal (MGO), is present in high levels in Australian manuka honeys. We’ve also shown that the activity of Australian manuka honeys has remained unchanged over seven years from harvest, which has huge implications for extending the shelf life of medicinal honey products.”

The findings are described as a game-changer for Australian beekeepers, who stand to benefit from the lucrative medicinal honey market, and clinicians seeking treatments for resistant skin infections and chronic and acute wounds.

While honey has been used therapeutically for hundreds of years, the growing global crisis of antibiotic resistance has revived interest in its clinical use. New Zealand is the primary source of medicinal honey but the country grows only one Leptospermum species, and its honey bee population is threatened by the parasitic varroa mite.

Australia is home to 83 of the 87 known Leptospermum species and is still free of the varroa mite, unlike the rest of the beekeeping world.

The research is part of a five-year UTS project funded by the Rural Industries Research & Development Corporation (RIRDC), through its Honey Bee and Pollination research program. There are about 12,400 registered beekeepers in Australia, and about 200,000 hives used for commercial pollination and honey production. The industry produces up to 30,000 tonnes of honey annually.

“It is thrilling to be able to use our research expertise and knowledge to help the bee industry and to address the antibiotic resistance crisis,” said Professor Liz Harry, director of the ithree institute at UTS and lead investigator of the project.

“Honey not only kills bacteria on contact but we have shown previously that bacteria don’t become resistant to honey.

“That the manuka varieties in Australia are just as active as those in New Zealand, and have essentially the same chemical profile, will add significant value to Australian honey for beekeepers and provide a plentiful supply of medicinal honey.”

“These findings go to the heart of what we’re trying to achieve, and that is to grow a prosperous beekeeping sector. The next step is turning the science into action.”