By Stephanie Lamm, Arkansas On Line 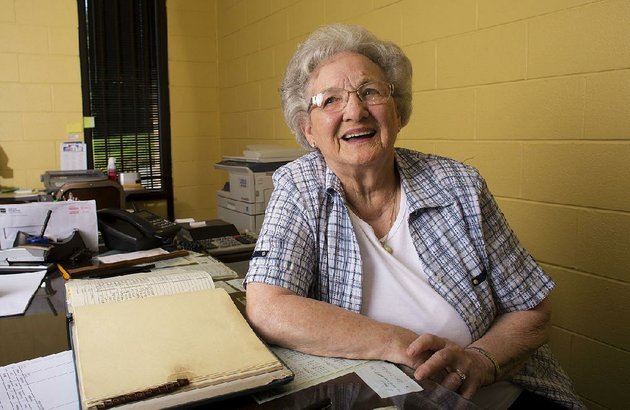 Margaret Faryewicz continues to keep track of accounts at Fischer Honey Co. in North Little Rock even after the sale of the company in July to Texas beekeepers.

At Fischer Honey Co., the books are kept by hand, just as they have been since the company incorporated in 1945.

Except now, instead of penciling in $20 orders for mom-and-pop retailers around Little Rock, Margaret Faryewicz keeps tabs on how many cases of Fischer honey are sent to Wal-Mart stores across the country.

Ann Fallon, vice president of Fischer Honey, said, “If I can’t find where a cent has gone, I go to mom [Faryewicz] because I know she’s written it down. Sometimes the old ways are better than the new ways.”

Fischer Honey, Arkansas’ oldest and largest honey processing plant, sits at 2001 N. Poplar St. in North Little Rock, where it has always been. Fischer is still family-operated, just as it always has been, but now, for the first time, it is owned by someone outside the Fischer family.

After three generations of Fischers, the owners recently sold the company to two beekeepers from Texas.

Faryewicz’s father, Raymond Fischer, started the company after a childhood of beekeeping.

A friend told his family that bee stings would ease his childhood rheumatism, which had crippled him to the point of needing crutches. His first hive was sent to him by his uncle, who captured it in a box while working on the Missouri Pacific Railroad.

Over the next decade, one hive turned into dozens. When the sugar shortage in World War II came, demand for his honey peaked.

“A friend in the grocery business told him, ‘Raymond, if you get you a label and a bottle, I can sell that honey for you,'” Faryewicz said.

Fischer enlisted the help of his wife and children. Soon his house was covered in honey. First it was the kitchen, then the basement, followed by the garage, and then he built another garage, all piled high with golden jars.

Faryewicz spent much of her childhood siphoning out honey.

Faryewicz, now 93, doesn’t bottle honey in her kitchen or glue labels on by hand anymore — there are machines for that.

At one time, Raymond Fischer would travel across the state to let his bees pollinate different crops.

“As a kid, I went everywhere my daddy went if he let me go,” Faryewicz said. “I have covered more country roads in Arkansas, mostly looking for black dirt where the crops grew best. Daddy would say, ‘Sissy, look for the black dirt.”

There are no longer any bees at Fischer Honey — a city ordinance limits beekeepers to two hives.

Fischer Honey is in charge of mixing the honey, bottling it and distributing it to 14 states.

“Years and years of practice, and we know how to mix the varieties to get it to taste just right,” said Joe Callaway, who married into the family and is now company president.

Callaway manages all operations on the factory floor. Fallon takes care of sales and runs the front desk.

Fallon has a computer to manage the business. Faryewicz hasn’t touched it.

“They show me pictures of my grandkids on their phones, but I couldn’t turn that thing on,” she said gesturing to the computer on Fallon’s desk.

Faryewicz has four daughters, 10 grandchildren and 14 great-grandchildren. She’s kept her family close — the farthest one lives in Tennessee — but after her daughters, there’s no one to take on the family business.

With no honey bottler in the family’s future, Callaway, Fallon and Faryewicz chose to sell the business.

The two beekeepers from Texas, who also own other honey companies, bought Fischer Honey last month. The price of the sale was not disclosed. The property sold for $420,000.

Callaway and Fallon will still run the business, and all eight employees plan to stay.

Faryewicz, who has tried to retire three times now, says she plans to keep working until she can’t.

“I’m not on the payroll, but I still come down and keep doing what I was doing because I just like to do it,” Faryewicz said. “This was my daddy’s dream. If I can keep it running, I’m going to as long as I can.”

When she can’t, and when Callaway and Fallon decide it’s time to retire, the Texans will take over.

Fallon and Faryewicz wouldn’t reveal the names of the new owners but insist “they’re honey people.”

Fischer Honey has always been a family company. Even under new ownership, Joe Callaway says, that won’t change.

“We’ve worked with these guys before, and they know our values,” Callaway said. “Not much is going to change around here.”

Joe Traynor Almond Prices: Almond prices took a precipitous drop in March – from over $4/lb to the grower to below $2/lb. Prices have…