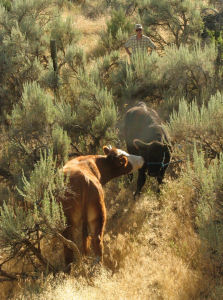 It broke my heart yesterday when Mike came for our steers Jem and Buttercup.

In the Spring we bought Buttercup. We wanted Summer mowing, and later, steaks. But Buttercup got lonely. He found the weak link in the fence and pushed on it. Steers do that. He settled in two doors down in some tall grass by the ditch. He slept under an apricot tree. Sometimes he’d visit the horse in a corral across the road. I couldn’t get within ten feet of him.

A week later Dolores from the feed store brought over her halter-broke 4-H steer Jem. As soon as she let Jem out of the trailer, Buttercup and Jem bonded, love at first sight. So when Dolores led Jem back to our place, Buttercup followed right along. Both steers bawled when Dolores took Jem away.

I told her, “Buttercup needs a friend. If you hear of anybody with a steer for sale, let me know, would you?”

A few weeks later she called and said she’d part with Jem. I paid too much for him, but I didn’t care too much. Now Buttercup had a sidekick and a reason to stay home.

Jem liked me to scratch behind his ears and always tried to knock the bucket out my hand when I brought range cake treats. Do you know how much a yearling steer weighs? Jem affectionately stepped on my foot once.

The two animals had a fine Summer and Autumn together grazing and sleeping in the orchard. Now it’s December and time for them to go. I don’t much like it, but this was the plan all along. An idyllic life and then one bad day.

A record warm fall ended one clear night two weeks ago when the mercury dipped to the teens. A week later we were below zero. I had top feeders on a few colonies. Those bees had mostly taken their syrup before the weather turned, but some of the little darlings hadn’t quite cleaned up their plate. I left the feeders on – for insulation, and for feed, when it warms up.

Here at the house honey buckets lie littered everywhere as we struggle to fill Christmas orders. Three sit warming in front of the woodstove. Once contains thicker-than-molasses honeydew honey. Honeydew is the sweet secretion of leaf-eating aphids, leafhoppers and psyllids. Bees sometimes use honeydew to make honey. You’re a gardener, right? You know how your rose leaves curl up, with aphids thick on the undersides of the leaves. The leaves feel sticky with sweet honeydew.

Here in western Colorado, oak brush occasionally produces honeydew. You know honeydew honey when you see it and taste it. It can be as black as a Coca-Cola and has a rich, strong, sometimes caramel taste and texture. Europeans consider it a delicacy. Have you noticed? In this country, the Euros are always looking for “dark honey.”

I usually call it “aphid-spit honey.” This intrigues some folks and makes others gag, but overall it makes a great sales pitch. I sell a lot of honeydew honey, when I can get it. I didn’t have any of my own, so I swapped with Paul for some. Slowly granulating, it’s thick like room-temperature butter, or 90-wieght gear lube. I can get it out of the tap if I warm it in front of the fire first. It’s fine. It’s raw.

Another raw honey we sell is naturally granulation-resistant Flat Tops wildflower. The Flat Tops are the high country north from here to Steamboat Springs. Up there bees make honey from mint, coneflowers, high rabbit brush, and blossoms you’ve never seen or even heard of, like dwarf waterleaf.

We sell the Colorado River valley alfalfa/clover honey for a little less than the aphid-spit and the wildflower. It’s generally what we get the most of. I only sell it as “raw” when it’s fresh out of the hive. You take a coffee break, and it’ll granulate on you. Once it turns, you need a sharp knife to get it out of the jar. So we do what we need to do to provide our customers with liquid honey, which is generally what they want.

Some beekeepers heat their honey and then call it “raw.” One major Colorado honey packer markets its honey as “raw and unfiltered.” One of their reps gave a talk at our state bee meeting. He said they heat it to 125 degrees and then strain it.

“Raw” can mean whatever you want it to mean, I guess. For us, raw means raw. If we heat honey to a high enough temperature to melt sugar crystals, we no longer consider it “raw.” As for filtration, we use the twin miracles of gravity and time to naturally strain our honey.

Marilyn’s cattle dog Pepper acted surprised tonight when he ran down to the steers’ empty pasture. He likes to give ‘em the blue heeler “strong eye.”  Those two are surely in cow Heaven by now. Pepper’s going to miss the boys. So will I. 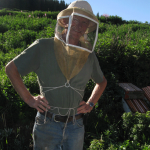