It’s been very surprising to me how many people do not understand the process of pesticide regulation within the honey bee world. To me, education is the most important component of literally everything happening in the world, and a lot of people are not taking advantage of opportunities to educate themselves before deciding that something posted on Facebook must be true because it’s on the internet. If more people understand the process of pesticide regulation, I think we can have a more productive discussion of the ways that risk can be mitigated while not significantly raising the costs associated with farming and production. 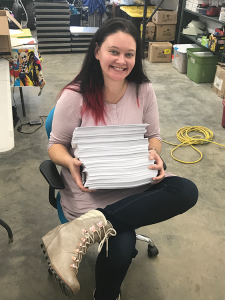 For a pesticide to be on the market, a few things have to happen. Chemical companies spend a huge amount of their budget on R&D to figure out what chemistry could be productive. Once a few promising compounds are narrowed down, various types of testing can begin. The timing of various stages depends on the class of chemistry or how “new” the compound is. First and foremost, human health is the most important factor in chemicals and labeling. Millions of dollars are spent on determining the risk level of every pesticide and its effects on humans. Some of the older chemicals such as organophosphates or carbamates are usually a lot more toxic to people, but were efficacious pesticides. Each successive class of chemistry that has come on the market has been a little safer and a little safer for humans, which is why neonicotinoids were originally so popular – they are extremely low risk to human health and most non-insects.

Besides humans, birds are usually a top priority in the testing. Since the massive success of Silent Spring and the demise of DDT, the effects on birds has been a standard addition to testing. This may include short term effects on adult birds, reproductive effects, egg hatching, growth, organ development, carcinogenic effects, or full field long term studies. This may also take place with multiple species of birds and years of field monitoring. This does include food that has GM crops in the ingredients to guarantee that there are no side effects to the birds that would eat the food.

Fish and aquatic life have a pretty high place in the list of priorities due to the high likelihood that some form of natural water source is near an agricultural use area. For some chemicals, or classes of chemicals, it is already understood what the general effects are in certain environments and less testing may be necessary. For example, pyrethroids are generally not water soluble and can be deadly to aquatic species, so a new chemical in the pyrethroid class of insecticides will start with the knowledge that their chemical is most likely going to have a quick photodegradation and be dangerous to aquatic life and plan studies accordingly. Most testing is fairly standardized and specific species are used as representatives of fish in general. Most of the time, these representative species are chosen because they are successfully bred in captivity, can be housed in a laboratory setting with minimal stress indications, and can be used as a surrogate for similar reactions as other species that may be more difficult to use. This may not only be fish, but also other aquatic life like daphnia or mussels.

Mammals in general can usually be found on a label. In the general public, this is a bit more important when you’re looking at something like a flea or tick medication for your pet and you want to make sure that you’re not giving your dog or cat cancer when you treat for parasites. Most pesticides have had rat studies conducted to understand what sort of mutagenic or carcinogenic effects may occur, and pesticides that are used in conjunction with animals will have to be tested in conjunction with those animals to make sure it doesn’t affect them. You don’t want to use a fly killer in your stable and find out that it leaches into your cows’ milk and renders it unsellable, or gives your cows cancer or makes them stillbirth their calves.

Honey bee testing is newer on the market and is not really at the top of the list. In the environment, honey bees are not essential to the ecosystem in the way that birds and fish are. There are not indigenous plants in the U.S. that will die out if honey bees are significantly affected, nor are there many plants that are only pollinated by honey bees and no other pollinator species can do the job. Honey bees are now required testing for their value as a livestock commodity rather than an ecological linchpin.

A lot of people who criticize honey bee research don’t seem to understand how it differs from standard beekeeping practices – which is a whole different article. Besides that particular point, a lot of planning has to go into conducing a study to determine the effects of a specific pesticide on bees. There are guidelines from the various governing groups that must be followed when creating the study design, depending on which part of the registration process that you need for compliance. All of the moving parts of this research are combined by a regulatory manager or group at the end of the testing phase, usually after several years of work, and submitted to the EPA or whichever government entity is applicable (CDPR, PMRA, etc). A study may be rejected outright for not meeting the specifications of the guidelines, no matter what the outcome was or how “good” the study was.

Before a study begins, plans for the study design (the protocol) have to be in place and that is usually approved by the EPA prior to study initiation to make sure somebody isn’t wasting time or conducting an unnecessary study. This step is assuming everything else is already in place. The lab conducting the study must have had a facility audit by the chemical company to prove compliance. In our case, we (Louque Ag) are the lab conducting the study, and we are called a Contract Research Organization (CRO). CROs do most of the research because we have no vested interest in whether or not a chemical has high risk to bees. We are basically higher paid waitresses that produce paperwork instead of food. My job, depending on what I’m paid to do, is generally to design a study that meets the criteria for the necessary study guidelines and conduct that study in the most awesome way possible. Part of the auditing process is to make sure that you’re not falsifying data (some labs have been caught doing that and those owners might be out of jail before I get Social Security – again, a whole different article), but also to make sure that you are following the regulations.

I can tell you that my entire goal is not to just produce good studies, but to produce better studies than anyone else who does this work. What this means for our field is that I can run a study from beginning to end that follows all the guidelines and can produce results that assist with risk assessments in the labeling of that particular chemical. Checks and balances are in place though, which is why our industry has more auditors than the IRS. Our major compliance is via Good Laboratory Practices, or the GLPs. Every company that conducts research either has their own auditor, auditing unit, or contract auditor on-call to make sure all the bases are covered. The comparison here is that your Mama might yell at you for doing something stupid, but she will jump on anyone else who yells at her baby. Our auditors are there to make sure we are compliant with all of the regulations, down to the required paperwork, enough personnel to do the studies, sufficient supplies, and can collect the data in the proper way. It’s not always pleasant because their job is to find everything you’ve ever done wrong and point it out to you repeatedly until you fix it, and you have to fix it in the correct way to also meet the guidelines (yes, that is a thing. You CAN fix something the wrong way), and they may also berate you for it and bring it up for years if you did something particularly stupid. However, they are the main line of “defense” against screwing up on a major level, and it looks bad on you and them if something slips through. The chemical companies also have an entire Quality Assurance Unit (QAU), and they go out and inspect the labs for everyone under their contract, usually yearly. They want to make sure that the lab under contract is capable of completing the work and can handle the workload and meets the requirements. On top of this, the EPA will also audit all of the labs on a semi-regular basis to make sure all of the guidelines are being followed.

We don’t actually produce some sort of physical product – we only produce data. Each study normally produces tens of thousands of pages of data that have been meticulously audited and checked by at least two people, plus a report that runs somewhere between 1,000-3,000 pages as a “summary” of all the data and the study conduct. If everyone hasn’t fallen asleep yet, the next rendition of my research run-through will be a detailed explanation of the GLP guidelines that have to be followed in order to do the research, and an overview of data collection and paperwork that is required. What exactly is in those thousands of pages of data?

Jessica Louque is a Research Scientist – Apiologist. She and her husband, Bobby, run Louque Ag, a Contract Research Organization (CRO) in North Carolina.