I don’t know how everyone else’s Spring season went with their bees, but we had an insane amount of swarms this year. Sometimes, we managed to catch up to 10 in a week! They have all been fairly photogenic or willing participants in videos (I suppose they were willing but I didn’t stop them to ask). We’ve had a lot of unusual occurrences going on in NC, and maybe some of these things have been happening in other areas as well.

Last year was one of our highest Varroa counts on record in our apiaries. They were totally out of control. We went through multiple rounds of treatments just to finally get the counts down to manageable levels just before overwintering started. This was in part due to the earlier Fall treatment starting around the same time as a late year heat wave, killing off most of the open brood in the colonies. Treating with miticides is much more effective when you kill the bees and the mites, I guess. Sarcasm aside, murdering a round of brood did provide some additional relief to the situation since the mite cycle lost a food source and it allowed the population to drop down faster than with treatment alone. The major downside here was that we were starting with the Winter bees and it hit most of the colonies pretty hard for a few weeks before they recovered in numbers. 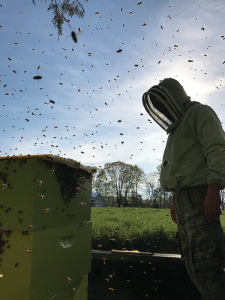 Once we made it through to Spring, we had about 80% survival across the board on average. It looks like we had a higher survival of mites though, as the populations started to explode in the early spring, along with the colonies. We were on the verge of treating in early Spring (something I don’t like to do because it interferes with the first honey flows) when the swarming season started. We had some colonies that were triple deeps before the end of February, and it still wasn’t enough room. Our temperature swings went from the high 70s to the low 20s sometimes in a span of less than a week. Then we had a drought in March, followed by an onslaught of rain that started in April and didn’t let up for a long time. One round gave us between five to eight inches of rain (depending on the site) over the course of four days, then another round brought in colder temperatures after being solidly in the 70-80° range, causing the colonies to start crashing. The rains may have helped the nectar flow in some cases, but it rained more than it didn’t during the tulip poplar flow. It doesn’t really matter how much nectar is available if the bees can’t fly.

We started really having swarm issues in March. We had a pretty nice week in early March to check the bees, and there were obvious signs that swarming had already started. There were queenless hives everywhere, full of swarm cells, with young larvae still present. I have the most amazing videos of swarms emerging from their cells, new queens piping on their first day on the job, and even one of a new queen with murder on her mind ripping open another queen’s cell with the help of the workers, only to yank her out, battle her across the top bars, and then throw her out of the hive and march around victorious like a WWE wrestler on Smackdown. Sometimes, we would open up a hive and it would instigate swarming. It was a real challenge just to keep the colonies under control. We tried to follow them when we saw them leave, only to have the swarm drift ever so slowly right across the highway over a neighbor’s house. Sometimes, they would go straight up about 50 feet in the treeline and mock us. I will say that this year has made me a true believer in Swarm Commander though. That stuff is amazing. 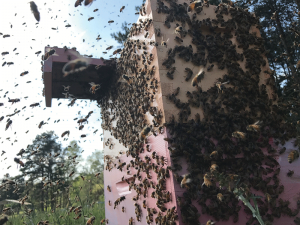 Swarm landing in a nuc box with Swarm Commander inside.

I first heard about it from Don Hopkins, who saw it in action at an EAS meeting a few years ago. It was sprayed on a tree, and within 15 minutes it had attracted a swarm from what seemed to be one of the teaching hives at the meeting. I bought some spray and a squishy long-lasting lure at Dadant, not really thinking it was going to be all that great but maybe would help some. Boy was I wrong. Once, I literally chased a swarm with a nuc that had Swarm Commander in it, yelling at them to get in the box. Then, the craziest thing happened: they did! I sat the box down though. It also made a nice video, after the yelling stopped (I didn’t want to sound crazy, duh). I started setting up the swarm lures, and had mixed success depending on usage ideas. I think a lot of the failures were user error, but a few times I did have a weird turn of events. 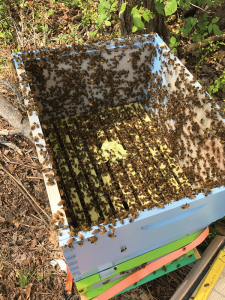 Once, we had a swarm land on a guidewire from a telephone pole. I sprayed Swarm Commander in the box and put it on top of the edge of the swarm. The swarm started crawling up into the box, and five minutes later, they exited in mass-exodus style into a nearby tree. After leaving them alone for a half hour, we were able to successfully knock them back into the box, where they are still happily contained. I’m not sure what happened there initially, other than perhaps the spray was too strong?

Another time, I learned that Swarm Commander spray will remove paint from equipment fairly easily, and it will trap bees in the melting paint. On other instances, we realized that sometimes it works too well, and we attract bees away from functional hives and have a box full of bees with no queen. Other times, I think we may have caught swarms that otherwise wouldn’t have left, or became super colonies from the swarm plus other foragers from nearby hives. Overall, I have been pretty excited with my success with Swarm Commander. I’ve tried it side-by-side with “standard” lures and I’ve bees go right past those and straight into a Swarm Commander baited box. Although laziness sometimes trumps common sense, I have seen that lures used in boxes higher than the current hive catch swarms the best, especially if they are within maybe 50 feet of the apiary. If they’re more than 100 feet away, I don’t have a lot of luck. In a strange couple episodes, I found that it works best if it’s not already in the apiary, but if you happen to be in the right place at the right time and put the lure out just as they start to swarm.

Another odd thing I saw this year was that a lot of the swarms seemed to leave with no real direction. I was able to chase down a handful of swarms with lures, simply because they didn’t seem to know where they were going. One swarm just hung in the air for about 15 minutes swinging back and forth between a tree and a pole before finally settling on a low-hanging branch. The queen probably was tired of flying at that point and landed on whatever was closest to her. One swarm flew out of the hive, collected themselves for maybe five minutes of unsurety, and proceeded to land on literally everything in front of their old hive. Our fruit trees, blooming flowers, grass, weeds, other hives – it was really weird. I put a nuc down in the middle of their bee blanket with a SC lure and they decided it was a better place than where they were, and after about 10 minutes they were all safely rehomed with the queen in tow.

I don’t know if this is just with the swarm lure because I’ve never really paid attention, but I saw 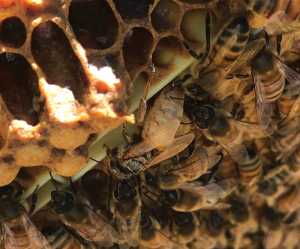 something by accident this year and it seems to work really well in some cases. I caught a swarm with a lure, but there were so many bees going in through the top and bottom that I didn’t really want to close it off. I put a bottom board upside down on the top for them to use, and ended up leaving it because it was the most popular entrance by far for the ladies. The hive has grown incredibly fast, and I’m not sure if it has to do with having multiple entrances, but I’ve tried it on a couple other swarms and they seem to “enjoy” the top entrance as well. The problem is that I can’t use a hive-top feeder with a bottom board because they have to be accessible only from the inside. It was worth it to not use a feeder at all on some of those swarms just from the increased activity and growth of using a top entrance. These are a total pain to move or deal with because you are opening the hive at the entrance and it’s harder to close off for transport, which is why I haven’t done it before. I might definitely consider using a normal lid during transport and switching out to a bottom board in the future. It may be an issue with robbing or queen laying, but I want to see how it does with honey supers. It’s a little slower going with honey if the foragers have to go through a queen excluder to fill in a super, but I don’t know if the top entrance would encourage robbing. That is a project for this year’s “questionable ideas” list.

If you were contemplating the use of Swarm Commander, I would definitely recommend trying it during your next swarm season. The squishy long-lasting lures kept selling out at Dadant, so maybe those would be a good stocking stuffer to save in the freezer until Spring? Just a suggestion!