By: Peter Snyder and Kim Flottum

Last September we published an article on this operation.

If you recall, NAGC honey bee research and assay development was undertaken with the financial assistance of the National Corn Growers Association and of the North Dakota Department of Agriculture.

The NAGC tests are highly specific because the assays are designed to identify the target diseases at the molecular level. Each of the 11 diseases has a specific genetic code that ourhighly sophisticated instruments can detect.

Curious, I recently went back to see what kinds of issues, or non-issues they were finding, and if their work was helping those beekeepers who submitted samples to be tested.

I asked Peter Snyder, Lab Leader how things were going, and he sent along the past two year’s worth of data they had collected. Had beekeeper’s paid for all this I asked?

The answer to this question is yes, and no.

Yes, approximately 380 samples were submitted by beekeepers in 2016 and 2017 who paid the fees found on our website: full panel diagnosis (11 pathogens) cost $75 for an individual colony and $50 per colony for bulk shipments of 32 or more colony samples. We can also test for individual diseases at $20 per disease in a single colony, but we are strongly urging beekeepers to not go this route. It really isn’t saving them money in the long run. For example, a couple of weeks ago a beekeeper sent us samples from three colonies to test for Black Queen Cell Virus based on a visual diagnosis. The report came back negative. So the beekeeper is out $60 and still doesn’t know what was wrong. Full panel screenings are essential.

And no, the 400 colony samples from North Dakota in 2017 were done in cooperation with and paid by the North Dakota Department of Agriculture, Apiary Program.

The data Peter sent is summarized in these two charts

Table 1. Summary of the number of colonies where each pathogen was detected in U.S. beekeeper operations in 2016 and 2017. The pathogen panel detected Black Queen Cell Virus (BQCV), Chronic Bee Paralysis Virus (CBPV), Deformed Wing Virus (DWV), Lake Sinai Virus 1 (LSV1), Lake Sinai Virus 2 (LSV2) and the bacterium, Melissococcus plutonius, the causal agent of European Foulbrood (EFB). Also given are the average number of pathogens per colony and the number of colonies sampled within each group or U.S. state.

Table 2. Summary of the number of distinct pathogens detected within each honey bee colony from private apiaries in the U.S from 2016 and 2017.

He then sent along some photos describing the process. 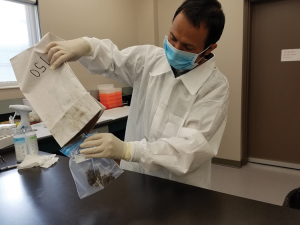 Honey bee samples are received and tracked separately at each step during the 11-disease panel analysis using a Laboratory Information Management System (LIMS). The LIMS is also able to send a report to the beekeeper who sent in the sample after the entire process has been completed. 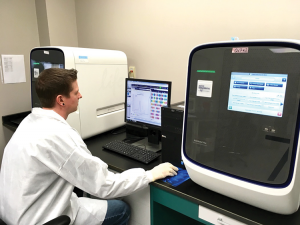 The honey bee solution is placed inside highly sophisticated instrumentation for High Resolution Melt analysis. Identification of the target diseases is achieved by analyzing the signals, visualized as peaks, on the computer screen. 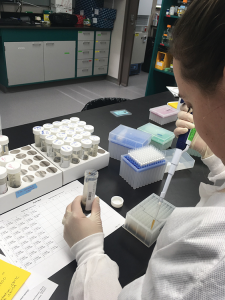 Honey bee extract is being prepared with the addition of appropriate chemicals to create a solution that can be analyzed. Each container represents one sample that was submitted to NAGC for analysis; each typically representing one hive.

NAGC is a not-for-profit laboratory that makes its diagnostic services available to both commercial and hobbyist beekeepers. For more information on the testing services, check the NAGC website at www.genotypingcenter.com.

I think this summary information is critical to beekeepers wanting to know for certain what their bees are dealing with, and, if possible, how to care for them.