Last month we reviewed the results of a trial comparing treatment-free cultural controls with a commercially approved acaricide (Bee Culture September 2021). In conducting the trial some interesting observations were made that I wish to explore further this month.

As the graph reprinted here indicates there was a surprising decline in Varroa mite populations in all hives that survived Winter. Each spring (monitoring events #1 in 2017 and #1 in 2018) the average mite count from a sugar dusting shake of approximately 300 bees (1/2 cup) was low. One would expect low mite counts in Spring when the colony headed into Winter with low mite counts, but low mite counts in Spring also applied to colonies that went into Winter with what are generally considered high mite levels. Some such as the five colonies in the Control group that survived their first Winter had mite counts that were quite high (averaging 22.8 mites) in Autumn of 2016 but by the Spring of 2017 had an average of just 4.6 mites per 300-bee sample. Low Spring mite counts did not correlate with the strength of surviving Spring colonies either, and were low in weak colonies as well as strong colonies. The observation that the mite levels in colonies naturally decline during Winter is likely due to a number of factors.

In northern regions like Vermont that have an extended cold Winter where the queen naturally slows down brood rearing and even stops for a relatively brief period of time during Winter, a natural break in the honey bees’ brood cycle is created which in turn interrupts the mites reproductive cycle. As the treatment-free trial indicated, breaks in the brood cycle whether artificially induced by a beekeeper or naturally created by swarming or from a prolonged Winter, has a significant impact on Varroa population growth.

The prolonged cold weather also severely reduces the ability of foragers to leave the hive in search of nectar, pollen, tree resins and water. As a result, mites are unable to spread from colony to colony by hitching a ride on bees that enter hives other than their own either through drifting or robbing.

The introduction of new generations of young mites is curtailed due to the slow down and interruption of brood rearing and the lack of mites being introduced into the colony from drifting and robbing. The existing mites in an overwintering hive that get old and reach the end of their life span are not replaced, and this leads to a natural reduction in the mite population infesting the overwintering colony.

Another factor that may also play a role in the reduced Spring mite levels observed during the trial is the genetic tolerance level of the colonies involved. The Russian based localized stock raised treatment-free and bred for survival in spite of the mite and used in the trial arguably perform very differently from your typical Italian or Carniolan bees.

This means that generally speaking, spring mite treatments in colonies located in cold regions may well be a waste of time and money. I say generally because various factors other than just the local climate need to be taken into account. It is common to hear beekeeping recommendations that confidently state that any mite population above X percent (whether it be one percent, or three percent, or whatever) requires immediate treatment to bring down mite numbers and prevent hive collapse and economic loss. What is not considered when these recommendations are made is not just the location of the colony, and the type of honey bees, but also the time of year.  In warm climates like California or Florida where Winters are brief or non-existent, the mite population suppression benefits of a long cold Winter are not realized and a one percent threshold for treatment in Autumn or Spring may be well advised. I have found however that for the kind of bees I maintain in a northern climate where the cold reduces mite population growth during Winter and the bees greatly ramp up their brood production in Spring, a one percent and even a three percent mite infestation rate during the month of May is of little concern and the bees do just fine without a Spring mite treatment. 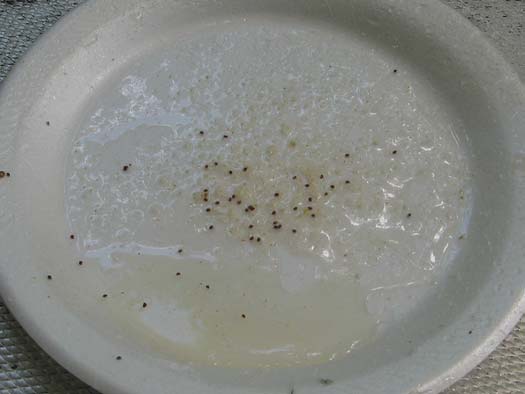 Spring is the time of year when my bees experience one of the major (and fairly reliable) nectar flows of the year. The Champlain Valley that lies between New York and Vermont is the best place in all of New England to keep bees. We have two major nectar flows each year (dandilions and clover/alfalfa) with numerous other flows which can be considerable but are often unreliable (goldenrod, aster, basswood, black/honey locust) and a lot of miscellaneous plants boom in between. While there may not always be a heavy flow, there is almost always at least a trickle of nectar and pollen coming into the hives throughout the entire active season (April-September). This allows colonies to build up rapidly in Spring and continue to grow throughout the entire Summer.

The importance of this fact was bought home to me this Spring by a California beekeeper who had recently moved to Vermont. We were checking some of my hives and the beekeeper seemed impressed by the strength of the colonies as we opened them. Having never kept bees in any place other than Vermont, the colonies seemed totally normal to me. I mentioned my being perplexed by the fact that so many beekeepers around the country seem to describe having small, weak colonies and that I had tended to attribute this to poor beekeeping skills and methods.  She pointed out that there are many places throughout the United States that simply do not provide the food resources throughout the year for a colony to continually build up through the entire season naturally without the need for feeding on the part of the beekeeper. This is when I realized that the amount of available nutritional resources and the accompanying rate of colony build up and population growth plays a huge difference in whether a honey bee colony will outpace the Varroa mite population growth during the Spring and Summer months or get overwhelmed by it. Now I think I understand what they are referring to when large commercial beekeepers say that nutrition plays an important role in Varroa control. If you do not keep bees in an area where nectar and pollen are naturally available throughout the active season, feeding bees so their population growth is not suppressed by a lack of nutritional resources becomes an important tool in Varroa mite management. I also give a boost to my colony’s Spring condition by leaving plenty of honey on wintering hives so that the bees rarely require feeding in Spring. Bees raised on honey are simply stronger and healthier than those raised on sugar syrup.

Another interesting observation I had while conducting the trial was the absence of the mite bomb phenomena that is often talked about where the mites in collapsing colonies hitch a ride on robbing bees and spread to other colonies in the area. With an untreated apiary of 15 colonies located just three quarters of a mile from the 30 treated colonies in the trial I was worried that I would see increases in mite numbers that would overwhelm the treated colonies as the untreated colonies died out from the effect of the mite. Instead there appeared to be significant drifting of mites within beeyards, but little drifting of mites between beeyards. What might account for this observation?

Only one control (untreated) colony was lost in each of the first two active seasons of the trial and these were lost due to queen issues, not by being overwhelmed by Varroa. Mite impacts in the untreated controls were expressed during the Winter months when the majority of colonies collapsed. The inability of nearby colonies to rob out hives that collapse during the cold winter protected neighboring apiaries from the mite bomb effect.

I always work to maintain strong colonies that are full of bees. It is rare that I have a colony that is weak and struggling unless it is suffering from a disease, queen issues, or I have made a split or nucleus colony, in which case I always reduce the entrance to make it easy for the weak colony to defend itself. While I would like to attribute the general strength of my bees to my beekeeping skills, the strength of my colonies is probably much more a result of the fact that I maintain colonies in a region that provides my bees with continuous access to nectar and pollen resources throughout the bee’s active time of year and this helps keep colonies strong and growing all season. 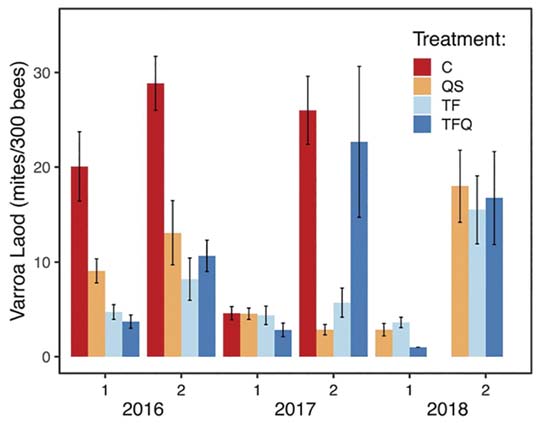 TFQ = Same as TF except no artificial brood break induced

Unfortunately we do not fully understand the numerous natural environmental factors that may influence Varroa population growth. For example, one of the few long-term studies on Varroa population dynamics (Harris, et. al. 2003) found that variations in Varroa population growth rates correlated with ambient temperature and relative humidity. If confirmed, this suggests that as the general warming trends of our destabilized climate advance, it may make beekeeper’s Varroa troubles much more challenging.

What steps a beekeeper should take and when they should act to address Varroa levels in their colonies really depends on many factors including:

What time of year is it?

Is the colony in a rapid growth phase or is brood rearing on the decline?

Will the colony have continual access to nutritional food resources?

What are the expected weather conditions in the apiary and will the bees interrupt their population growth because of it?

What are the genetic characteristics of the colonies in question?

What type of hive is the colony housed in?

Has the colony recently swarmed or has a brood break been introduced by the beekeeper?

Are Varroa population numbers surging or growing at a normal rate?

For every beekeeper, the answer to the above questions will vary and therefore the answer about what to do about Varroa and when will vary. When well-meaning beekeepers declare that all beekeepers must do so-and-so in order to protect their bees from mites, they ignore the numerous factors that are unique to each apiary and can impact Varroa and the mite’s effect on colonies. All beekeeping is local. The ability of bees to thrive or decline in the face of Varroa mites depends a lot on the local weather conditions, available food resources, colony genetics, as well as beekeeper management and the population growth rate of the mites themselves. All beekeepers who take the stewardship of their colonies seriously should take steps to address Varroa mites, but what those steps are and when they should be implemented will vary widely and are contingent on the above mentioned factors.