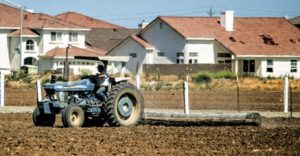 Modesto, Calif., and surrounding communities are a case-study in the unmitigated urban encroachment onto highly productive farmland.

Some of the most productive farmland in the U.S. is being paved over and compromised at an alarming rate. Nowhere in the nation is this happening faster than in central Arizona.

American Farmland Trust (AFT) has sounded the alarm for decades. In a recent report titled “Farms under threat 2040,” two Western states continue to be a case study in unmitigated urban development and its impacts on farmland. Highest on this list are counties in Arizona and California that continue to face high urbanization rates and the impacts of climate change.

According to the AFT report, Maricopa County, Arizona is losing farmland at a faster rate than any other county in the nation. Maricopa County includes Phoenix and its many suburbs, including regions west of the city along the Gila River where hop-scotch development creates challenges for the remaining farms in an area bookended by Buckeye and Goodyear.

Ironically, Maricopa County does not include the City of Maricopa. That growing metropolitan area is in the adjacent county of Pinal. Though not spelled out specifically in the AFT report, the City of Maricopa is growing rapidly as it largely serves as a bedroom community for the greater Phoenix area. Housing projects there include upscale homes nestled against man-made lakes.

Late last year farmers in at least one Pinal County water district south of Maricopa were warned that their irrigation allotments would be cut by over 50% because of declining levels at Lake Mead and curtailments of access to irrigation supplies through the Central Arizona Project.

The lengthy AFT report addresses the runaway sprawl of homes and urban development in prime agricultural growing regions. Absent the issues of drought and irrigation deliveries, areas like Maricopa County and those that run the length of California’s Central Valley are not merely good growing regions for food and fiber; they are shining examples of inefficient urban planning projects that for decades have further challenged farming operations.

The report highlights three California counties as well. Riverside and San Bernadino counties are said to be the two fastest in the state to be losing farmland. Fresno County, the nation’s leading agricultural county by gross value, is third behind the others, and the 17th fastest in the nation behind counties surrounding metropolitan regions in Texas and other U.S. locations.

“If we continue to develop land as usual, we will continue to lose the most important farmland in the world, and that will affect our local food supply,” said Kara Heckert, AFT’s resilience agriculture advisor from the West.

AFT wants to see smarter land use planning to safeguard farmland and the ability of farmers to produce crops from some of the richest soils on the planet. Within California, where highly fertile soils have been covered by houses, shopping malls and business parks, this is critical. California remains one of a small handful of locations in the world with a combination of soil types and climate most advantageous to food production.

“California loses about 50,000 acres of farmland to development per year,” she said.

The report highlights policy steps urban planners and local agencies can take to protect farmland. This will “require rapid, widespread, and sustained efforts to improve policy and land-use planning at all levels of government,” according to the report. Three scenarios discussed at length in the report highlight potential losses to farmland through a business-as-usual approach, runaway sprawl, and better-built-cities. The latter is the optimal choice, according to AFT.

By 2040, AFT estimates that nearly 800,000 acres of California farmland may be paved over, fragmented, or compromised under the business-as-usual plan. This will eliminate over $1 billion in farm output annually. Under the runaway sprawl idea, AFT estimates that closer to 1 million acres of farmland would be lost or compromised. Smart planning policies could cut the latter figure in half, but Heckert admits this will take tough leadership within the state and local governments to achieve this goal.

Nationally, AFT predicts that 115,000 farms with $11 billion in annual farm output will be lost by 2040, taking 263,000 jobs with them. This will not just impact the rural communities they support, but further degrade U.S. domestic food production at a time when geopolitical strife and global trade challenges make it difficult to import and export food.

Farmland does not necessarily need to be paved over to be compromised. This happens as urban planners approve uses inconsistent with commercial farming operations that encroach on these farms and cause challenges for the nearby operations.

In one example, commercial dairies in the Chino and Ontario areas of southern California were enticed by large checks from developers over 20 years ago to relocate. Some of them moved north to the southern end of the San Joaquin Valley, 30 miles south of Bakersfield and generally far from urban encroachment. Over time, urban planners approved housing developments and schools that leapfrogged outward from the city center. In time, those dairies and the farmland that supported them became closer to housing developments, and subject to complaints by homeowners.

Further challenges to farmland use practices happens each year as California lawmakers write new law. Several years ago lawmakers enacted rules to demand that pesticide use within one mile of schools must be announced and publicized before crops can be treated with products. Schools have long been approved in California with no deference to their proximity to farming operations. Once a school is built it drives other urban planning efforts which eventually wedges out commercial farming operations.

The AFT report can be found online at https://tinyurl.com/bdf4n2mj.

We are here to share current happenings in the bee industry. Bee Culture gathers and shares articles published by outside sources. For more information about this specific article, please visit the original publish source: https://www.farmprogress.com/land-management/us-continues-lose-critical-farmland