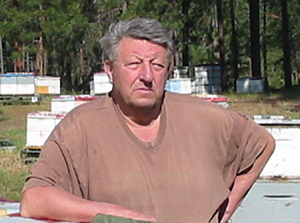 During the hot part of the season I receive many calls and Emails: IM BEING TOLD THAT IN THIS HEAT I CANOT USE FORMIC ACID. It is on Mite away and on Medivet labels.

The HEAT and Weather: that kills Queens and brood like MITAWAY, sterility of drones and all other rumors has nothing to do with Formic acid itself. They are all results of bad flash and blast methods of its application.

The continuous slow and low dose methods like Mitegone do not have those problems as they use remarkable ability of bees to maintain the brood temperature and humidity, there for are not outside weather and temperature dependent.

I got this answer:

I agree completely with your statement about timing of mite treatments. Lloyd Harris studied the age structure of bees in colonies in Winnipeg for his Mac degree. My student Heather Mattila reinterpreted his data and was able to demonstrate when Winter bees are produced. In the prairies (Winnipeg), the first Winter bees are emerging in late August, with the bulk of them having emerged by 25 September. That means that mite levels need to be much reduced by 15-20 August to prevent damage from mites during the sealed brood stage.

Probably here in southern Ontario the timing is shifted later by 10-14 days, but nevertheless your statement is correct: treat bees in August to prevent damage by mites and the viruses transmitted by them. By September, the game is over.

Gard then wrote the summary of this paper.

WHEN ARE “WINTER BEES” PRODUCED IN COLONIES?

Twenty years ago I asked the question: When are Winter bees produced? I was interested in this question from a practical standpoint: when should beekeepers have Varroa mite populations in their hives under control if they want good overwintering success and strong, healthy colonies in Spring?

As luck would have it, Lloyd Harris had studied the age structure of bees in colonies in Winnipeg for his MSc degree. He established colonies from two-lb packages (approximately 7000 bees) and released the queens on 25 April, 1976. Starting on 14 July, he introduced cohorts of newly emerged bees into colonies at 12 day intervals, and then recorded the numbers alive in each cohort every 12 days thereafter. From these data he determined the age structure of bee colonies under different late Summer re-queening methods as well as in control colonies. Within his data lay the answer to my question, but it was difficult to visualize the answer.  I recruited then undergraduate student Heather Mattila to reinterpret his data and demonstrate when Winter bees are produced.

Heather’s reanalysis of the data yielded somewhat surprising results. In the prairies (Winnipeg), the first newly emerged bees that became long-lived “Winter bees” were recorded on 31 August. For that Aug. 31 cohort, approximately 60% died before Winter (before 1 November), while 40% became “Winter bees.” Twelve days later, 70% of the bees became long-lived Winter bees, with the proportion of “Winter bees” increasing with time until the last bees emerged around the end of October. With the large amounts of sealed brood present at the end of August and early September, even though only a proportion of the bees emerging during that time period join the Winter bee population, more than half (53%) of the Winter bee population had emerged by 12 September. Not many worker bees emerged after 6 October.

THE IMPLICATION OF THESE RESULTS: 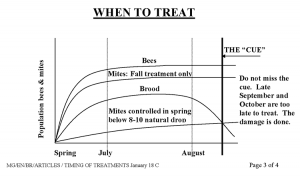 If a beekeeper has not controlled Varroa mite populations earlier in the year and wants to treat hives at the end of the season so that they contain healthy bees going into the Winter (i.e., bees that have not been fed upon by Varroa mites or had viruses injected into them through mite feeding), then he/she should reduce mite levels before significant numbers of Winter bees have been produced. As an example, if beekeepers want to control Varroa mites in their colonies by 31 August when the first Winter bees are emerging as adults in the prairie provinces, then miticide treatments should be applied before 17 August; that is the date when worker larvae are being sealed into their cells that will emerge as adults on 31 August. If beekeepers wait until 1 September to treat their hives, approximately 55% of the bees destined to become winter bees will potentially already have been fed upon by mites.

Heather Mattila subsequently studied the effects of the amount of pollen entering colonies in Ontario in September on the transition to Winter bees (Mattila and Otis, 2007). In the control colonies (i.e., the colonies in which the amount of pollen was not manipulated), no Winter bees developed among the bees introduced to colonies on 1 September. However, by 13 September, about 40% of the young bees that were introduced into colonies became Winter bees. Those bees would have been sealed into their brood cells at the beginning of September. These data indicate that the transition from Summer to Winter bees occurs about two weeks later in Ontario  than in southern Manitoba. We do not have comparable data for the lower mainland of BC or the Maritime Provinces. However, the same process, i.e., a gradual increase in the proportion of Winter bees among emerging workers over time, undoubtedly occurs everywhere as pollen foraging declines in Fall. Note that feeding additional pollen or a high quality pollen substitute in Fall would delay this transition to Winter bees.

In summary, to have healthy worker bees over the Winter, Varroa mites need to be controlled by the time the first Winter bees are emerging in colonies. That means miticide treatments should have been applied by mid August in the Prairie Provinces, the first of September in Ontario, and probably by mid September in the lower mainland of BC. Beekeepers must also remain vigilant as the fall progresses because the numbers of Varroa in colonies can increase quickly if nearby colonies are collapsing from high mite infestations.

I have been preaching this fact of how and when to treat for the past 20 years. The graph below has been on my website since 2007. In Canada, beekeepers must treat at the following times for the treatment to be effective. Dates are:

Any beekeeper can establish his own “CUE” Day. It is when the queen reduces laying at the end of the Summer from many to only a few frames. Your own “D”date to treat will be just few days earlier.