Nobody said it would be easy. It wasn’t. 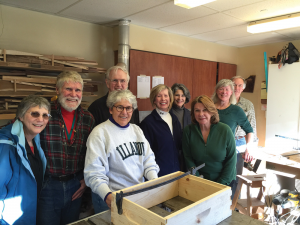 Starting bees can be a challenge. Starting beehives and a new bee club doubly so. For a dozen senior residents of the shore region of Sussex County, Delaware, both were successively accomplished this past year.

The Delaware Atlantic Shore area (at 28 miles in length only New Hampshire has a smaller Atlantic shore), is a haven for retirees and hordes of Summer visitors; Cape Henlopen State Park, Delaware State Seashore, Rehoboth, Dewey, Bethany and Fenwick Beaches are all popular summer resorts.  Within the curve of Cape Henlopen State Park, sits Lewes, western terminal of the Cape May (NJ)-Lewes Ferry.  Lewes is home to the Osher Lifelong Learning center. This past Winter, a five-week beekeeping class was offered at the center and a new Lewes Bee club started by class members.

Dean learned beekeeping 30 years ago helping a 100+ semi-commercial beekeeper in western NY and once had as many as a dozen colonies himself. With retirement and move to Cadbury village, a retirement facility along the DE shore, he rekindled his interest in bees. He built and stocked an observation hive in the library of his retirement facility and then started a standard hive on an outside patio.

Tom was teaching math courses to seniors at the Osher Life Long facility while Tom, a naturalist by training and inclination taught a number of natural science/biology courses at the facility (a converted public school). As friends, they decided to team together to put together the first offering of beekeeping.

The two accomplished a goal that might be the envy of any beekeeping course instructor, inspiring nearly a third of class members to join together and start beekeeping. Two additional class individuals also started bee colonies on their own, contributing to the new club.

Course participant Denise Bridgens organized eight class individuals, mostly older women (who are by far the majority of Life Long course participants), to join together to become beekeepers. Denise  who “. . . became fascinated by bees”  recruited six more  members (“. . . it wasn’t hard finding others to join”) and one of those, brought in a friend, so the initial club count was 15 individuals. Denise organized the first club meeting in Mid-February, even before the LifeLong learning class had finished. A treasurer was appointed and Denise volunteered to keep members informed of club activities via email.

Course instructor Dean provided an estimate of costs for the purchase of the bees and hives. So within a month, each founding member invested $90 so the club could start two hives. The new equipment (one medium 10-frame Langstroth and three shallow boxes per hive) was purchased and a committee of assemblers put the boxes, covers and bottoms, as well as the frames, together. Equipment of one hive was painted pastel green and the other painted yellow. Assembly was part of one of the Life Long learning classes, with Dean, a skilled woodworker, supervising.

After some searching, an apiary site was established at Black Hog Farmstead in Lewes close to the community where most of the participants lived. Two three-lb packages of Russian Bees, each with a marked queen, were ordered from Kelley Beekeeping. The packages arrived May 7 and were installed Tuesday afternoon May 10 by three club members into the medium depth box, with Dean’s assistance. Feeders were added above the inner cover and then weekly replenished with syrup. Dry pollen was also fed close to the hives.

The weekend following the installation Denise shared with the group “The bees are safely ensconced in their bee box which they travelled in from KY. I just checked in on them and they are happily buzzing.   We have our two hives at Black Hog Farmstead prepared with sugar syrup as well as some bee bread (protein based pollen cake) to provide them with immediate sustenance. Looks like they are content and clustered near their queen who is in her own separate box within the overall larger bee box. They are lively and have started making comb in one hive. As you can imagine and will soon see for yourself, there are lots of flowering plants already for the bees to forage, so all should go well.”

Of the 15 original founders, seven members remained active in club and colony activities for the entire season while the rest maintained some contact, at least through emails from Denise. Four individuals made almost weekly visits to check on the bees. After their first solo visit, Denise emailed club members “it felt like a big milestone, at least for me, to open the hives, remove frames, install traps and feeders, and close it all up smoothly and w/o a bee sting or upset bees or beekeepers.  And we did it all in under an hour.” It became evident a number of club members had only joined to support pollinators overall, not become beekeepers

Denise and a few others, including the two individuals who started their own hives, began to attend the Sussex County branch of the DE Beekeepers’ Association meetings (each of the three DE counties has their own county association as affiliates of the State Organization). Denise shared summaries of the bee meetings, called attention to (and attached to her emails) interesting bee information and continued the progress reports on the club colonies.  Monthly meetings included tasting of honey and wine brought back from travels of members, along with updates on the two colonies. 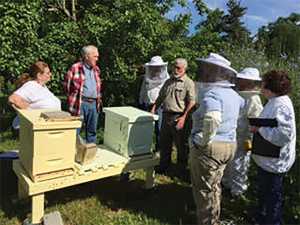 A big event for the club was a June visit by Bob Mitchell, who recently retired as DE apiary inspector. Bob met the several active members at the Black Hog Farmstead apiary and showed them how to do a hive inspection. He provided timely advice during the disease hive inspections. Bob found most of the brood in the first super of the green hive, so he revised the hive architecture, reversing the shallow with the empty brood so the bees would expand upward into the medium, the ‘intended’ brood box.

Bob removed the two empty honey supers on top of the yellow hive. In the green hive, the bees had chimneyed in the three supers (i.e. drew or partially drew frames up the middle of the three boxes, ignoring the outer frames), so he consolidated frames into the medium brood box and 1 honey super. He explained that the club should plan to add more supers once the bees filled up the 2 boxes using the 70-75% rule.  Bob pointed out the difference between the stronger green hive and the weakness of the yellow hive.

As new beekeepers, the Club had one issue after another to figure out.  Small hive beetles were detected by Bob Mitchell. He treated the soil with Guardstar and recommended purchase of SHB traps. During an inspection, trough syrup feeders were thought to be breeding grounds for the SHB, especially in the yellow hive.  This particular feeder was a new design and although it looked promising, it seemed to cause too much syrup to drip into the hives when initially inverted and shellaced bees caught in the dripping. So a one-gallon inverted pickle jar was exchanged for the original feeder.

In August, Denise wrote club members. “Our little bee club has a big problem with bald faced hornets being all over the yellow hive. . .  We will not be able to open the hives to feed the bees anymore and I fear the hornets will wear out and kill all the yellow hive bees and then go after the green hive which is two feet from the yellow hive.” A bald-faced hornet nest was discovered in bushes immediately behind the hives. After some decision-deciding emails, and discussion with the Farmstead owners, it was decided to eliminate the nest with a hornet and wasp spray in the evening.

The hives were also treated for varroa mites. Denise wrote the members “This morning we also treated for the deadly varroa mite you hear so much about – we applied two Apiguard treatment packs to each hive.  We did a test last week using the bottom grid boards to check for Varroa mites and didn’t see any.  However, we are being proactive by treating . . .” 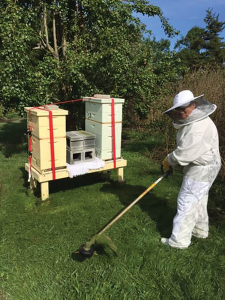 In late August, the two hives were prepared for potential arrival of Hurricane Hermine. They were strapped to the hive stand (see photo). Thankfully, the hurricane passed without incident.

In mid-September Denise shared the bad news with club members: “I’m having concerns about the bees.  At first glance, it seemed the bees were doing alright but after thinking more fully, the yellow hive bees are getting weaker every day.  Here’s one absolutely critical [thing] we didn’t consider at all and I think our oversight on this issue could be our biggest undoing… The yellow hive can’t forage and we didn’t see one bee with pollen going into the yellow hive after having spent significant time observing the activity. It is just a full-on defense posture for the yellow hive.”

When it was clear the yellow hive was lost, Denise’s notes to the club membership when it was opened included:

There was some good news to share as well. There was an eventual harvest but not of the club’s green hive. Dean Hoover, their instructor from January was joined by half dozen club members who assisted in helping him harvest approximately 25 pounds of cut comb honey from his balcony hive at the Cadbury Senior Center where he lived. It was thought the Honey from Dean’s hive the “best ever” they had experienced.

The club has begun to conduct outreach activities around their beekeeping venture. An informative article on the new club was published in the local newspaper the Cape Gazette during the Summer. Ed Hynes, one of the class (and club) members who started his own bee colonies to pollinate his vegetable garden, is a Master Gardener volunteer and every chance he gets talks about the value of pollinating bees.  His vegetable garden was on the local Lewes Garden Tour this past Summer. Club members, assisted Ed by being docents by his hive, providing overviews of what bees do, how they do it, etc. during this event. They also have assisted the Black Hog Farmstead owners, where their two hive apiary is located with outreach. 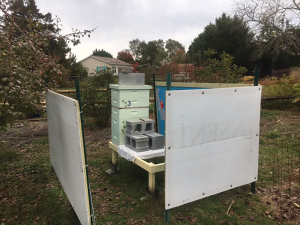 Plans are underway to replace the yellow hive next year. With assistance of the Sussex Branch of DBA, the club will purchase a nuc to repopulate the yellow hive. The club constructed a Winter windbreak from recycled 4X8 election campaign signs, donated by a local candidate, for the surviving green hive. The screen bottom board will remain open for ventilation.

Several members are planning to journey to northern DE for the annual Eastern Apicultural Society Conference and Short course (July 31-August 4, U of Delaware, Clayton Hall Conference Center, Newark DE) where they will have the opportunity to share their club founding and success story with EAS.