Gleanings in Bee Culture was started on January 1, 1873, as a quarterly for the purpose of answering the multitude of questions that kept pouring in. In getting out the first number I had to confess to feeling not quite as much at home as in the old American Bee Journal. Improved bee culture was my end and aim. I knew that perhaps I might not do as well as the least of those whom I had criticized. At any rate, I was in the crucible, and if the fiery ordeal left nothing of any value I made up my mind I would bow my head in submission, and stop when I had fulfilled my promise of giving four of the best numbers of which I was capable. 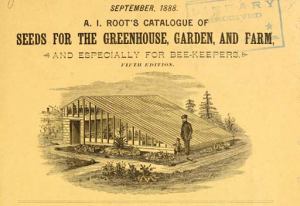 The first number, however, was received so enthusiastically that Gleanings was immediately changed to a monthly instead of a quarterly; those who wished 12 numbers sending 50 cents additional, making 75 cents a year. Those who paid but 25 cents were to receive only five numbers.

In the second year I received quite a number of complaints because Gleanings was not received on time. There were some suggestions of putting Gleanings on the list of the tardy periodicals. I protested against this, for so far I had mailed every number promptly on or before the 30th of each month. I asked my readers to conclude that the post office had failed, that the cars were off the track or that Uncle Sam had suspended business – at any rate not to intimate that I had been so shiftless as to fail in mailing Gleanings as heretofore. About this time, if anyone wanted to stir me up, all he had to do was to send in a postcard asking if I had printed the October or April or some other number, as the case might be. I made sure of promptly printing them but it was occasionally more difficult to avoid making a mistake in mailing.

In 1875, C.F. Muth gave directions for cleaning honey jars with sal soda and shot. My compositor got the last word “salt,” and it was printed in Gleanings that way – “sal soda and salt.” About that time I purchased a typewriter, so that henceforth all that I attempted to say on postals would be printed. It cost $125.00. It is a shame to make blunders in advertisements, yet that is just what I was doing early in 1876. I quoted Mr. Lane’s buckwheat at 75¢ a packet instead of peck; and still worse, Dr. Larch said “Italian bees at $4.00,” instead of $14.00, just because I did not see that very little figure “1” had some means dropped out.

Quite a good many of the May number of Gleanings for 1877 were reported as folded wrong, the first page being on the leaf next to the last. No one could tell how it came that way. As the June number was being mailed I picked up one copy at random and found it in the same predicament. I opened three more and found them just like it. Of course, the whole lot had be overhauled and made right.

One afternoon the boss printer said he wanted so many inches of matter to fill up a given space. I got it into my head that the space was to be after an article by Mr. Boardman, entitled “A Model Beeyard,” therefore I gave the printers the required amount of copy for the matter in view. When the journal was printed later on, my reply to Boardman appeared as a part of my reply to Manum. In the same issue appeared a short item headed “Rat-tailed Maggots.” I had dictated a reply to this, but to my consternation it did not show up on that page but appeared at the end of an excellent article by Prof. Cook on “Cuckoo Bees,” while the intended footnote to the article on “Cuckoo Bees” did not get in until the next issue.

Of course, it was not such a terrible matter, but it gave one an impression that the editor had his head filled with reservoirs, windmills or something else besides the business in question.

In the May number for 1876 I printed a letter from D.P. Lane in reference to the difference of opinion among beekeepers regarding smokers. If it had been only smokers on which beekeepers disagreed, I might have felt thankful, but it was hives, honey, bees, feeders and patents to say nothing of the diverse opinions in regard to how a bee journal should be conducted. As an illustration one reader wished his journal stopped because I did not answer questions more at length, so that a novice could understand, and at the same time several of the veterans were actually getting mad because I filled the “Heads of Grain” department with so many repetitions of things wish me to repeat the whole of what I wrote the last year or the year before, and yet I was getting abused because I often referred inquirers to the back numbers. One subscriber insisted that I make every number complete in itself without any reference to previous numbers, while others wanted me to collect all the facts I could on the subject, give an exhaustive article and then refer future inquirers to that number.

And it was the same in regard to small or large type. In the April number of that year I called for a vote on the use of small or large type and the votes were just equally divided and about equally vehement, so that I was finally obliged to decide according to my own best judgment.

When Gleanings Was Printed by Power from Windmill

Several in writing me in regard to it, mentioned the time when Gleanings was printed by windmill power. Vol. 1, No. I was dated January 1, 1873, but was taken from the press on December 6, 1872, the printing for the first year being done at the office of the Medina Gazette. A year later, however, I had a press of my own, and the first issue for the second year was printed on this press, I myself running it by foot power. I had a large windmill and when the wind was blowing I had a mechanical arrangement that would relieve me from working the treadle. A good deal of the time the printing was done partly by wind power and partly by foot power. I remember one night, when we were late, I made preparations to run the press all night. As there was not a breath of wind, there was no way but to tread it out. About 10 o’clock, however, a breeze sprang up, and the press kept going faster and faster, but as the wind came up gradually I learned to feed it as the speed increased. Under the inspiration of seeing my two hobbies work at the same time, the printing press and the windmill, I put in the sheets so rapidly that I was through and at home not much after midnight.

Of course, there was some grumbling among the subscribers because some of the sheets were printed crooked, but when I explained the matter everyone was kind and forbearing. After that it began to be a kind of standing joke that any crookedness was to be attributed to the irregularity of the windmill. Before Volume 3 was off , however, the wind proved to be too uncertain and a 4½ H.P. steam engine was put in to supplement the foot power. For quite a while both the windmill and the engine pulled together quite amicably. 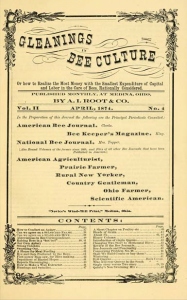 I wonder if it is wrong to wish to shake people who do not sign their names to their correspondence. A beekeeper in Texas wrote twice complaining the he did not get his “ABC of Bee Culture” and there was no sign of an address on either of his postals. On the last one, however, after a great amount of trouble we deciphered “Texas.”

A few asked to have Gleanings kept going, saying they would remit soon and then when they remitted they made no mention of the fact. The result was I sent them two copies and after a while a “dun.” When one is paying a debt he should by all means say so when he sends the money. I could not remember individuals any more than I could remember drops of rain during a summer shower. To be sure I was glad to see the individuals and the raindrops, too, for that matter.

In 1877 I received a letter from a friend who said he could not afford to take Gleanings, but who asked so many questions that I felt I would almost prefer sending him a year’s subscription free rather than to undertake to answer them.

Gleanings goes to all sorts of people in all sorts of places. It frequently made visits in lunatic asylums. From a pathetic letter from an unfortunate brother in one of these asylums I quote the following:

“Mr. Root, I have no honey bees here. You never sent me any of your journals to the hospital since I was at this house. I had one when I was down at the other house, but some scamp stole it. They do not like me here. I use no tobacco at all. I do not even smoke. I have not since my name was used for President.”