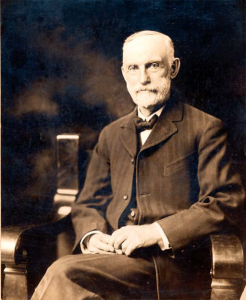 I do not like to take exception to anything that is published in Gleanings in Bee Culture. Since early childhood I have been a devoted disciple of A.I. Root. I was never privileged to see him in life, but I have walked with him in the garden, in the early morning when the dew was still on the roses and with him I have listened to the birds singing their sweetest songs and I have strolled across the fields with him as he discovered some new object of interest and told about it in Gleanings. So I come to write my first word to Gleanings to take exception to something said therein.

In the last number of Gleanings you say: “In this issue, more than five years after his death, A.I. Root finally says good-bye to his readers.” I think not. A.I. Root still lives. He lives in the hearts of a multitude of people who are not beekeepers as well as those that are. His influence for good vibrates to the ends of the earth – he hath truly chosen that good part which shall not be taken away from him.

He came into my life in some mysterious way so early in my childhood that I can scarcely remember when I was not interested in the things that interested him. I was fascinated by his studies in bee culture and I have ever sought to exemplify the Christian life which he lived. Having been raised in a section of a country which was not adapted to profitable beekeeping, when I came to the age of choosing my life’s activity and was still under the influence of that divinity which inspired the pen of A.I. Root, I took to religious expression and became a minister of the gospel.

However, I have not ceased to walk through the lanes and by-ways of nature where God reveals himself in silent but impressive voice and there commune with those ethereal waves that as I believe, connect heaven and earth in no more mysterious way than we now hear by means of radio. The secret A.I. Root’s life was the secret of heaven. Somewhere along the way he came in contact with God through Christ. He conceived the fact that God and life are one. And if God is life, then he is interested in all our doings. In such a case God becomes a senior partner and it certainly seemed that, like Enoch of old, he walked with God.

His form now rests in silence and his pen indeed is mute; but in the hearts of his readers he still lives and they, in turn, will impart to their posterity something of his fine influence until here in this world that which he has chosen shall not be taken away from him and in the world toward which the living now incline I think he still enjoys the blissful springtime of growing flowers, singing birds and humming bees and sunlit rays that spray the golden streets with glory until it seems I see him there as one I hoped I might see him in Medina.

Yes, dear editor, you are right when you say he “says good-bye to his readers,” but I think it is only such a good-bye as we say to those who take a voyage and then will meet again, for he lives. He lives in the hearts of his children as they carry forward the work he has so well advanced; he lives in the hearts of his readers, who loved him for his purity of life; he lives eternally where there are no good-byes.