Comb Foundation Made of Paraffin

In June, 1876, I was filling orders for comb foundation made of paraffin. In my experiments to determine what would give the paraffin the requisite elasticity I recalled that the bees added propolis to their wax when they wanted it very strong and as it would have been a hard matter to furnish as much white and tasteless propolis as I needed I thought of a favorite gum of childhood days – Burgundy pitch. I found that this added to the paraffin in very small quantities gave just the tenacity need.
The paraffin and Burgundy pitch comb foundation did not prove a success after all. I had made and sent out a hundred pounds or more of this foundation and for fear a part of it at least would not prove satisfactory I gave notice that all those who had had trouble should send in their bill for damages and I would either refund the money or send better foundation. I had to discard the Burgundy pitch because it required so large a quantity as to darken the wax as well as to communicate a perceptible taste to the paraffin.
I began mixing beeswax with paraffin and made beautiful foundation. In fact, everything worked as nicely as I could desire until some very hot weather came on the 13th and 14th of June, when I found the cells stretching downward into ovals instead of hexagons. It was really amusing to see the troubled look on the countenances (?) of the young bees as they surveyed their work after repeated attempts at patching up and repairing. The sight of their discomfiture created some merriment, but I gave a faithful promise to the bees that hereafter they should have material that would stand the proper degree of heat. 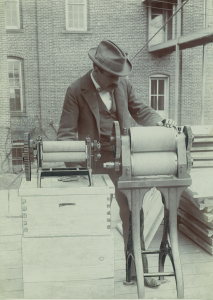 I made plates and tried comb foundation just one-half larger than drone comb. It evidently puzzled the bees for they tried to follow the angle and still make worker combs. They actually did make worker comb, but with three-cornered vacancies filled with wax.

To Prevent Sagging in Foundation

In 1877 I had found that almost all specimens of wax would sag more or less, though the white was worse than the yellow. It is necessary to cut the sheets so that they do not quite touch the bottom-bar. All the combs must be fastened ultimately to the bottom-bar, but they should not touch it until they are finished.
Very much depends upon the kind of wax used. If the wax is hard and firm even in warm weather, there is very little sagging and the darkest-colored wax frequently stretches the least. Years ago I had what I had reason to think was pure beeswax that was so soft that my finger could be pushed into a cake during warm weather. By avoiding wax like this I could make foundation that would sag so slightly as to be practically perfect.
In the early ‘70s, to entirely prevent sagging of the foundation in the brood-chamber, I tried making foundation on cloth or paper and succeeded very well with thin tissue paper, but all my experiments on cloth, even with the very thinnest I could get, were failures, simply because the bees would occasionally get hold of a thread and then would tear the cloth all out, apparently thinking it a moth web.
I obtained some very fine book muslin and also tried tracing linen, but although I could make beautiful foundation on both, the cloth made the base of the cells so much thicker than when I used wax alone, that it added to the weight and consequently to the expense.
While bees will work in combs made of metal when coated with wax I found that they are very apt to pick at paper or cloth and finally tear it out entirely. In 1875 I had combs in use that were built on very thin paper dipped in wax and pressed in dies to make the impression of the bottom of the cells. I tried almost all kinds of twine incorporated in the wax; but although I made repeated experiments, I discarded everything of the kind. Even though the bees let it alone for a short time, they were pretty sure to tear it out when the yield of nectar ceased.
However, I succeeded perfectly in making foundation on boards about an eighth of an inch in thickness, my chief difficulty being in getting these boards perfectly coated with wax on which to make the foundation. But the plan took too much wax for flat-bottom cells and I could not devise a satisfactory method of indenting the thin board’s just right.
In February, 1879, J.Y. Detwiler, of Toledo, made me a visit, bringing some sheets of tin-foil. These were dipped in wax and run through the mill, making a foundation which he assured me was a perfect success. I did not doubt that the bees would build comb on this, but I did not quite like the idea of metal at the bottom of the cells and there was the extra weight and expense besides. It was of course proof against sagging.
There were a large number of experiments running over quite a period of years in the late 70s and early 80s regarding presses for making comb foundation, in which wires were incorporated to prevent stretching. However, I found all such foundation was much more brittle to handle than that made on rolls; in fact, one was very much disposed to get out of patience in trying to handle it after handling that from the rolls.

The work of developing the comb foundation, like other new inventions, was a sort of groping in the dark for scarcely a month went past that some improvement was not made. One afternoon in the Summer of 1878, while thinking of the inconvenience of dipping boards and peeling the wax off, I had visions of a large pair of metal rollers made hollow with a stream of cold water kept running through them to keep them cool, these rollers dipping into melted wax so that a sheet could be rolled out on the other side a mile long if desired. This dream actually came true though, of course years later.