A Useful Tool For Judging Honey

A polariscope, according to the Random House Dictionary is: “an instrument for measuring or exhibiting the polarization of light or for examining substances in polarized light, often to determine stress and strain in glass and other substances.” 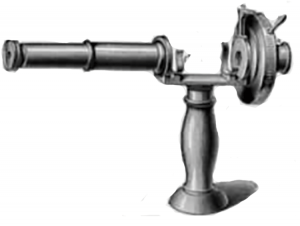 The origin of the polariscope was in Italy during Medieval Times between 1820 and 1830.

The early polariscopes used a nicol prism or a selenite crystal, whereas today’s polarizer’s use plastic or Mylar film. A common polariscope consists of two polarizing lenses and a light source. One of the lenses is called the polarizer and the other is called the analyzer. Both of the lenses are the same and their purpose is to filter the light into a one directional wave.

There are polarized sun glasses which use this principle. They have only one lens for each eye and filter some of the many rays from reaching the eyes. Thus one will notice that glare is reduced and colors are brighter. The lenses in the glasses are both set alike, so the rays are entering the eyes on the horizontal plane. 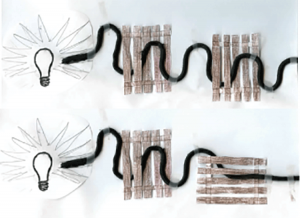 If both of the polarized lenses in the polariscope are in the same plane, the result is a filtered light in one plane. However if the lenses are at right angles to each other, the light is blocked by the second lens. This is illustrated by the drawings where the fence represents the filter and the wavy line is a light ray. In the first drawing, a light wave that is on the same plane as the gap of the picket fence can make it through. Light waves that do not line up with the gap are blocked. When it comes to a fence that has the same orientation, the light wave continues. If the second fence is at right angles, the light wave is blocked and only a small amount of light gets through.

The Duboscq Polariscope was developed by Jules Duboscq of Paris, and was made from 1864 to 1886. Jules apprenticed with Jean Baptiste Francois Soleil and married his daughter and later assumed control of the scientific side of Soleil’s business in 1849.  He remained in business until his death in 1886.

Jules Duboscq is also given credit for developing the Norremberg Polariscope Apparatus in 1860.

I purchased a page of polariscope drawings that were in an 1890 Polish book. It shows eleven polariscopes of the time and I would like to point out two items. All of the polariscopes had circular lenses and all of them used natural light. These two points are important as the lenses found in the honey polariscopes are square or rectangular and the light usually supplied by an incandescent bulb.

From 1882 to 1910, there was a problem of sugar being imported into the United States. The importers thought the normal trade test should be used in determining the tariff. The government wanted to use the polariscope as it would reveal the color and crystal make up. This also could tell if the sugar was from floor sweepings or had additional water added. Dark sugar was treated as raw sugar and subjected to various tariffs whereas white sugar was treated as refined sugar and had an additional duty called “differential.”

Most of the polariscopes were made for gemstone analyzing as the light beam is polarized to go through the gemstone and the second filter is rotated. During the rotation the observer watches the light rays and can count the number of times that the light “blinks” in the 360 degrees of travel. Thus one can check for real verses artificial stones, natural color verses artificial colored stones, and if chemicals have been added. The stones are usually placed in the polariscope in at least three different positions and the gemologist can determine if it is Isotropic or singly refractive (SR), Anisotropic or doubly refractive (DR), Aggregate (AGG), or Amonalous Double Refractive (ADR). No one test is conclusive to the stone’s identification. Some colored stones often give misleading results and Garnet and Diamonds sometimes display the ADR or twinkling phenomena.   Actually they are in the SR category along with: Spinel, Opal, Amber, Glass, and plastic. Stones usually in the DR category are: Zircon, Quartz, Beryl, Apatite, Corundum, Tourmaline, Topaz, Zoisite (Tanzanite) Peridot, Orthoclase, Spodumene, Labradorite, Axenite, and Mossenite (Syn. Diamond). 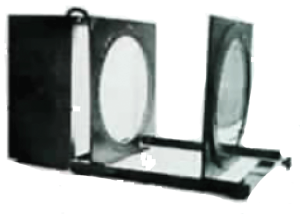 For more than 60 years Tiedemann & Betz have made polariscopes and one model is similar to the current honey polariscope in that it has a light box and two filters on two rails. However the filters are glued in between glass and are circular so at least one of them can be turned. Perhaps this was the inspiration for the honey polariscope.

At a recent honey show, I was asked “What are you going to do when you can no longer buy the regular incandescent light bulb?” I replied,”I know people that have used the fluorescent light bulbs for years.” In fact, I have a friend that is working on a design of a polariscope that can be folded up and put in a briefcase. The two filters can be hinged or on “pegs” that will fit in holes in the base board or rails. There is no specification as to the distance in between the lenses except that you can put a jar of honey between them. You might as well figure on a five pound jar, because there are some shows that have them. The lenses must be at right angles to each other and I suggest that they be taped in between glass sheets to protect them from being scratched. 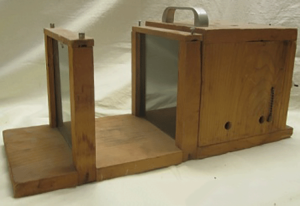 The light source could be something like LED light bulbs, similar to what is used in small flashlights. It may take several of them, but you would have a battery powered device that wouldn’t require you searching for an electrical outlet. A real easy solution would be to use one or two flashlights. Then you would only have to work out the mounting bracket. The LED bulbs do not produce heat as incandescent bulbs will, so you don’t have to worry about venting. The base of the polariscope could be made out of something lighter than wood, like aluminum. Do the lenses have to be six inches square?  Nope! The reason that the original polariscopes had six x six lenses was that Polaroid made the film in four foot by eight foot sheets and it was very expensive. If the sheet was cut into the six x six squares, there would be no waste and there was an even number for polariscopes. Polaroid sold the rights to make the film to another company and so the large sheets seem to be no longer available. Thus you can buy the film from places like Edmunds Scientific in odd sizes or look on the internet under photography polarizing filter sheets. Your task is to figure out how to cut the piece in two to get two somewhat equal pieces when they are turned at 90 degrees to each other. Keep in mind that when you are using the polariscope you usually hold the jar by the top and move it around between the lenses. It might not be a bad idea to have a “perch” for the jar to sit on. That way you can see the bottom of the jar where granulation usually begins and possibly use smaller lenses. 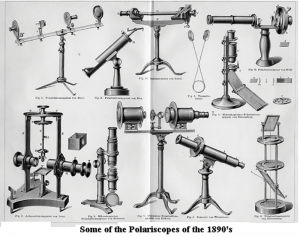 What do you expect to see with a polariscope? The polariscope makes it easy to see imperfections in the jar. You should always have a glass jar as the filters are made of plastic and a plastic jar reveals strange colored rays in many directions. Any foreign particles are highlighted and so you may see air bubbles, pollen, wax, lint, granulation, bee parts, and other debris. You should move the jar around to see if the objects are inside the jar or on the outside surface. Depending upon the show, you may overlook the fingerprints on the outside of the jar at a county fair because many people may have picked up the jar. However at a national show, no one is to have touched the jar so the fingerprints and other things are reasons for deductions. In the lighter colored honey classes, you can see through the jar easily, but in the amber and dark amber classes it is more difficult and you may have to turn the jar so that you can see through small areas near the edges.

Some judges will use a flashlight to shine through the jar and that will reveal many of the impurities but not as many as with the polariscope because of the filtering lenses. If a regular gem polariscope has the capacity to hold a jar of honey, it could be used as a honey polariscope as long as the analyzer lens is set on 90 degrees.

Colored Gemstones Guide, from the internet

Tiedemann & Betz, from the internet

Jim Thompson is a long time beekeeper and historian living in Smithville, Ohio.