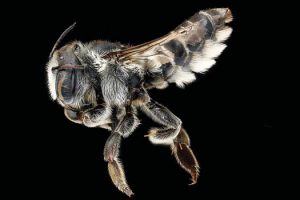 Field Marks (use butterfly binoculars!): Completely black skin (integument), most of the time with bright white hairs in bands on the abdomen, and white hairs elsewhere on the thorax and head.  Some males have pale front  tarsi and tarsal segments, these usually immensely expanded in width and used to cover the eyes of females during mating. Carries pollen UNDER its abdomen, not on its legs; these hairs can be white,  brown, tan, black, orangish, but most commonly white. Compared to other black members of its family they  average larger, hairier, wider, mid- and hind-legs stouter, out later in the year,  and much more common. Abdomens held rigidly straight behind them, does not sag downward. Females, in particular, will often arch/curl their abdomens up/backwards exposing pollen or pollen carrying hairs. Female mandibles wide, stout, shear-like. Male mandibles less massive than female but still  prominent. When feeding on flowers hold their wings at a 45° angle to body in the Wide-Bodied Group but often overlapping on the back in the Narrow-Bodied Group.
Use in Agriculture: Critical for alfalfa pollination and M. rotundata is raised commercially for that very reason; found in abundance pollinating soybeans (increases yield), sunflowers, and other summer blooming crops. 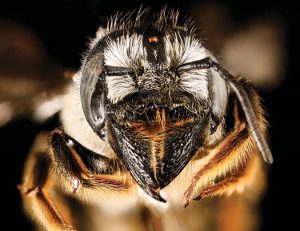 Leaf-cutters are the wide-bodied truckers of the bee world.  Rather than transporting their pollen on their legs, they move dry pollen to the specialized pollen carrying hairs under their abdomens (nectar is carried in their crop).  They are common and many are “weedy”, hanging out in the most disturbed, industrial areas that you can imagine. Others are highly restricted by their pollen preferences such as the rarely found M. brimleyi and M. integra which specialize only on wild viney native milkpeas or fuzzy beans (sadly they seem to have no interest in garden bean or soybeans). From a field perspective Megachile can be divided into a Wide-Bodied Group and a Narrow-bodied Group. The narrow-bodied groups is less common and often useses resin to separate its nest cells.

What can you do to attract these bees? Plant things in the pea (Fabaceae) and composite (Asteraceae) familes. That would include things like the native sunflowers, beans, clovers, indigo bush, blanketflower, wingstem, vetches, goat’s rue, acacia, cactus, aster, goldenrod, thistle, rabbitbrush. Many nest in cavities, so you can provide some low-budget housing by taking a portable drill and using bits from 1/8 in. to 3/8 in. drilling any piece of dry wood on your property (be sure to clean the sawdust out of the hole out as you drill), this can be fence posts, fire wood, the rafter tails on your shed, dead wood on existing trees or downed logs – give the drill to a kid, they will have fun and get outside. Alternatively, bundle last season’s tall ornamental grasses, cane, or Phragmites and tie off sections a foot apart and cut in between with a hand saw to create instant bee housing, place around the yard in spots protected by the sun and rain. Keep one by the kitchen window so you can watch the action. There are no stinging issues with this group. 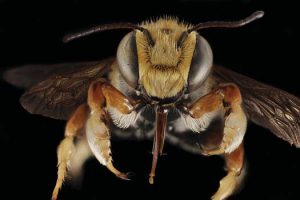 Male showing expanded tarsi to cover the eyes of the female 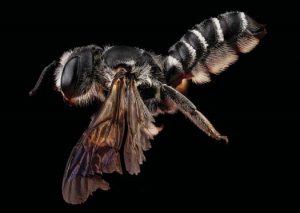 Female with her butt in the air.