August was about as busy a time as I’ve had in years. We were gone for a week to Delaware for the annual EAS Conference which is always a pleasure, but trying to fit in lectures, running the table we have selling books and giving magazines away, and simply visiting with old friends and new friends as well makes it hectic. This year we were a bit busier because we were shooting some live video during the week.

Howland Blackiston, author of Beekeeping For Dummies, and his friends Leslie Huston, owner of Bee Commerce, and Marina Marchese, all out of Weston CT, put on one heck of a show on Tuesday night. It was kind of like Jeopardy, called Jeoparbee, where two contestants were challenged with questions by host Howland and the first to ring in had the first chance to answer the question. If they got it right they got points, if not the opponent had an opportunity to answer and if they got it right they got points. All the questions were about bees and beekeeping and were fun and not too complicated. Howland and his girls were in Gold Lamae and very attractive. Of course Marina, the co-author of our book The Honey Connoisseur was fun to watch as she was the Vanna White of the show – it was fun to watch, and we did a live broadcast of most of it on our facebook page. It’s still there if you go to our page and click on videos.

If you do, you’ll see more videos there that we did at EAS live too.  The next night we watched Cliff Sunflower and his Dancin’ With The Bees show. Cliff gets everybody in the audience going, all as members of the hive. There’s a queen, nurses, drones, foragers, undertaker bees, guards and more. He gets them all on stage and then makes them all do their thing. He starts with the queen, then her court, then nurses, then – and each time he adds a group, he makes them all do what they are doing – the queen is laying eggs, the court is feeding and cleaning her, the nurses are feeding the larvae, the guards are guarding, the foragers are chasing nectar, the undertaker bees removing dead bees – and he gets them doing it faster and faster and faster. If you get a chance, take a look. Cliff is a magician and his bees are wonderful. 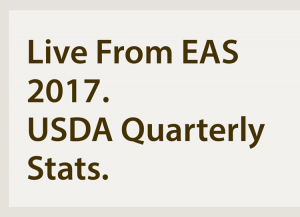 The longest live feed we did, now remember, this is live stuff, was to visit the vendors. The KIM&JIM show, with me and Jim Tew stopped by almost every booth and talked with whoever was there for a few moments…what’s new, what’s going on at your business this year, and what’s coming up. Some, like Kelley Bees’ Earl King (doesn’t everybody in the universe know Earl from Kelleys?) were laid back and easy to talk too, while some were a bit anxious and others a tad under strung, but everybody was good at giving us a lot of information in a short time. It was the newest vendors that I enjoyed most, and they were either in the technology markets…Hive Minder and the like, or the biologicals, with their newest products for honey bee health just getting started. The whole thing lasted just a hair over an hour and it’s had over 4000 people take a look. The surprise, right at the beginning was a visit with Charlie Brants, the beekeeper at the White House that we’ve visited with over the years. He’s still there taking care of the bees and having a good time. The Vendor show got rave reviews and was both fun to do, and is fun to watch.

The next thing we did was probably the best show we did, and Facebook lost it in the cloud. We went to the beeyard to watch and listen to the EAS Beeyard Wranglers. Don Hopkins, State Apiary Inspector from NC, Jennifer Keller, lead Technician at Dave Tarpy’s Lab at NC State, and Lewis Cauble, one of Don’s regional inspectors in NC stand guard, teach, instruct, help, guide and protect bees and beekeepers for the whole week. When we got there Lewis was finishing a demo on a sugar shake mite test showing a dozen or so beekeepers how he does it and explaining all the ins and outs and how to decide and everything else. It was a good demo, and I’m disappointed facebook lost it.

We did one more before we left. I sat down for a visit with Dewey Caron, Mr. EAS himself. Dewey’s first EAS conference was 50 years ago this year, and he’s missed only a handful all that time. He served as Chairman of the Board for 10 years, has been President, program chair a few times and now serves as advisor for the EAS Master Beekeeper Program. He was Program Chair again this year and helped us set up the live shows we did, and sat still long enough for his interview. If you want a bit of EAS history, and US Beekeeping history, check out that program, it’s worth your time.

We’ll be doing more of these as we go along. We’ll be in Jim’s Bee Yard again looking at some of his hives, maybe out here looking at ours, and who knows where else. All you need is a facebook account and a cell phone and you can broadcast to the world. Exciting times, these. Stay tuned.

Just in case you haven’t seen it, the USDA NASS folks came out with their quarterly report on numbers of colonies for those with five or more, and fewer than five colonies, stresses including Varroa, other pests, diseases, pesticides, other stresses and unknown stresses in early August. This is, like the last an informative quarterly report. You can get the entire report at the USDA NASS site, but here are some numbers that sort of capture the whole picture I think.

I trust you see the value of gathering all this data and presenting it this way. NASS didn’t do this the way I did because they are dealing with all the states over all this time. But we broke it down to these categories in their time frame to show the seasonal fluctuations we know, and have always known exist in this business.

Previously, when NASS was doing an annual survey, you would have seen that the number of colonies on Jan 1, 2014 was 2.74 million, Jan 1 2015 and it was 2.66 million, Jan 1 2016 was 2.62 and now Jan 1 2017 it’s 2.62 million. That tells a story, but the wrong story.  It shows, essentially, no growth. But wait, there’s more. If you go back to the 2016 annual report, the number of colonies was published as 2.78 million, not 2.62 million, a 16,000 colony difference. What gives? Well, each state has a resident number of colonies and that seems to be the lower of the two published here. But every season, colonies move into, or out of states on their migratory routes, increasing or decreasing some state numbers during the quarterly time frame they were counting in. For instance, between Jan 1 and March 1 2016, California count moved from 1.13 million to 1.41 million, obviously for the almond bloom early on. Meanwhile, ND moved from 89 thousand to 137 thousand during the same quarter, though this would have been later in the quarter as colonies moved out of CA, and TX went from 240 thousand to 320 thousand. So, this new quarterly report seems to have taken some of the mystery out of the annual report, or at least made it more realistic, and, even better, now shows the volatility of migratory beekeeping. Just imagine how many semis full of bees moved into Texas during that quarter, carrying 80 thousand colonies, at about 450/truck load.

Now, with the quarterly report the picture is much more dynamic, and telling. Add in the other factors they’ve now included like stressors, symptoms of CCD and the like and the chart that comes to be is very informational. The pattern of per cent mite stressed colonies is interesting, but not at all surprising. Nor is the pattern of pesticide stress. When do crops get sprayed? Spring and summer. When are the sprayers in the barn? Fall and winter. Like we said, not a surprise but certainly a good picture to be able to show decision makers, suppliers and others who are influenced, supportive or dependent on this industry.

Unfortunately, if you look at this one way, the terrible losses are over and beekeeping has recovered. That’s been the story since this came out from those who have pooh-poohed the crisis we face. We know the whole year’s pattern, but if one only looks at a partial year all you see is roses. We all know bees don’t like roses. If you are challenged with this short sighted view, tell them to look at the whole year. Last year and now this year.

If you look at the same data for those with five or fewer colonies the seasonal cycle is even more dynamic. They only have data for the years 2015 and 2016, but the picture is telling.

The patterns are similar to the commercial operations, but the changes are a bit more dramatic. Certainly the % lost each quarter for the smaller operations is larger, even though the numbers are much smaller. I encourage you to take a look at the entire 20 page report covering eight quarters over two years. I don’t mind huge data sets, but who will take the time to look at these patterns and seasonal variances each year. Add in the pollination report they do now and the world is getting a much better picture of what the US beekeeping industry is all about. Of course it’s giving the U.S. beekeeping industry a better picture of what’s going on internally also, and, if possible, where improvements or adjustments can be made to improve colony health, beekeeper financial positions, and grower responsibility in terms of working with beekeepers for honey bee health.

September is, or was, National Honey Month. 25 years ago it was a pretty big deal and lots of folks got involved. I think it’s a sign of the times that the business model of U.S. beekeeping is changing, and honey is carrying less and less of what we do. Certainly it is still important but the tide has, for now turned and it seems that pollination, and making bees for pollination, new beekeepers and more pollination is the way to go. If that’s the case, so be it. But I kind of miss the hoopla and attention honey used to get. Don’t you? But for the time being, keep your veil tight, your smoker lit and your hive tool handy. There’s still work to do.