Toward the end of this month we will be hosting three webinars as part of the Healthy Bees 2020 program organized  by Project Apis m. I’ll be moderating, with Danielle Downey and Dave Mendes helping out. PAm distributed a significant amount of money a bit ago, and the three projects below are the results of that research.

Stephen Martin, Ph.D., Professor, School of Environmental & Life Sciences, University of Salford, UK will discuss how the viral landscape is changing, how these changes are affecting U.S. honey bees and specifically how the Varroa mite is providing a new viral transmission route for a previously rare and largely benign virus called Deformed Wing Virus (DWV). The mite’s main role in causing the death of honey bee colonies is by acting as a transmitter of this virus. DWV is now one of the most wide-spread insect viruses in the world with most colonies in the U.S. infected – healthy-looking bees are also potentially infected, not just the deformed ones, as people often think. DWV is made up of several distinct viral strains, and each viral strain may have a different effect on the honey bees. The project is seeking to determine if non-virulent strains can be linked to increased colony survival to develop a long-term solution to the problem of Varroa-transmitted viruses.

The Keys to Colony Success

Joseph Cazier, Ph.D. and Ed Hassler, Ph.D. of the Center for Analytics Research and Education, Appalachian State University, and James Wilkes, Ph.D., Computer Science Department, Appalachian State University, and Founder, HiveTracks.com, will discuss advancements in the use of technology-assisted data collection at the honey bee colony level to assist beekeepers in making wise hive management decisions. This “Smart Hive” project is aimed at building a data platform that identifies and improves best management practices (BMPs) through the tailoring of BMPs to specific apiary or hive locations. Additionally, the improved monitoring of hive conditions aims to reduce costs, increase efficiency in honey bee colony management and provide a measurable reduction in annual colony losses within both commercial and hobbyist operations.

These are all aimed at making life a bit better for our bees. They’re free so be sure to get registered – you’ll see registration links on our web page – and tune in if you can and catch them live and be able to ask questions and get answers, or later they will be archived and you can catch them there when you have the time.

Our honey report this month takes a look at spring weather in each region, and how it affected both bees and beekeepers. We don’t often take a look at the past because by the time you get this, it is – well, already past. This has value though, because what happened this Spring goes a long way in determining what will be happening the rest of this Spring, and early Summer. Delayed honey flows, or early honey flows, early swarming, frosted crops, bunched pollination dates, slow build up or too-fast build up – all play a role in what we have to do.

We’ve reprinted articles by the Cowboy poet Baxter Black on occasion because he touches on a lot of things that happen to both cowboys and beekeepers, and one of the things we have in common is that we have to play the hand we’re dealt. When the weather says you can’t get feed to – either cattle or bees – for longer than it should take and nobody dies because of it ~ you got lucky.

We have those kinds of things happen. You got three days off, and it pours rain for all three days and nothing gets done. Not only can’t you get to the beeyard, you get soaked just getting to the truck to get your stuff. So you didn’t get lucky. And the deadline for what was supposed to get done got moved.

It’s those deadlines that make us crazy sometimes. And they are either self-imposed – I’ll get this done by Thursday so I can get that done over the weekend. And when Thursday comes and goes and it isn’t done – the weekend just got busier.

Sometimes the deadlines aren’t self-imposed because some body, or something else says – get it done, now. You got to pull bees out of the orchard because they are going to spray tonight, and your truck’s cooling system is spread out all over the warehouse floor, waiting for a part. Or those packages are flat out of food, it’s rained for four days, the mud is hip deep and the syrup truck is stuck somewhere in the next state.

Deadlines. The best you can do is be prepared, know it’s not going to work just the way you thought it would and what can you do then, and maybe it won’t work at all and what then? Then, is being prepared, ready for the delay, the missed delivery, the bad weather, the missing employee, the broke truck…it’s the way it is, and…like it or not, we’re not in charge. Know that, and it gets a lot easier. It still doesn’t get done, or done on time, or done right, but it will be what it will be. Living with the unknown sets you up for that you know. You just think you know what the weather will be tomorrow. Your phone said sun, warm and dry. And it was, and it got done, or it wasn’t and why not and what now. Biological systems, paired with meteorological systems add up to an infinite number of outcomes for everything you do. You’re not in charge. But then, that’s why you do this, right?

Well, that’s one of the reasons I do this. I’m not a poker player so I try not to bet that I’m going to be right, given the odds of the weather, the bees, my schedule and the rest of my life. You don’t bluff below freezing weather in May, or a flight delay that keeps you overnight one more night.  You do have to play the hand you’re dealt, but it’s how you play it that counts, and my plan is always to anticipate the absolute worst that can happen and have fixed it before it happens (mostly). For instance . . .

Packages and splits this Spring were right on time, well, within the window I’d planned for. Split the two biggest way before they think of swarming, get some brood in them, lots of bees, and lots and lots of food. I have enough honey left over this year that I didn’t need that box of fondant I got this Winter just in case. So every hive had at least a super of honey – a medium super –and several frames of pollen. I harvest light so I have all this ready, because mixing syrup is  way more of a pain than I want to deal with, so if I have to, it’s a slice of fondant. Quick done and gone. No mixing, no broken jars, no refilling, no carrying them all over creation – no, no jars, no syrup, never again.

But with enough honey, there’s not even any fondant. So, right after the packages were installed and the splits made, there was essentially two weeks of rotten, cold, rainy weather. Opening a hive was possible, but suicidal and if I’d had to feed – well, I’m glad I didn’t. There was a Sunday afternoon break and you take it and run, or miss it and wish, so we took it and checked queens and cells and found an interesting thing about queen cages.

The cages in the packages were the California cages, without the tube for fondant and the plastic cap. Just a cork, put in sideways so there was actually a bit of a gap. My plan was to leave the cork in for about a week, then remove it and fill the hole with fondant and let them release the queen when the fondant was gone. That didn’t work. They ate the cork. I’m conservative when it comes to releasing queens. I like 10 days in the hive in the cage minimum. Because of the cork being eaten, she was only in the cage about nine days total. Three or four days less than I like. But there is no going back. So we closed them up and – another week of foul weather where looking in would have been – not pleasant for bees or people.

Finally, after another week, it was just barely good enough to open and pull a frame or two. Yup, brood, yup, still lots of honey. Yup, I’d fixed it as good as I could before it broke. Got lucky this time. 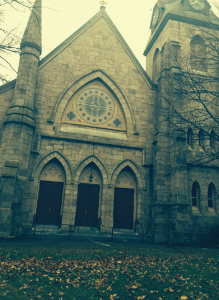 In early June I’m traveling to a pretty special place for a beekeeper. I, along with several others, including the Governor of Massachusetts, will be speaking from the pulpit of the Second Congregational Church in Greenfield Massachusetts, where L.L. Langstroth was minister from 1843 – 1848. I’ve been there before, the guest of Dan Conlon, who runs Warm Colors Apiary near Deerfield where he is a honey producer, sells Russian queens and nucs and bee supplies. We didn’t go inside when there previously, but this is the front of the Church. We’ll spend the morning there then go to Dan’s in the afternoon and look at some of his bees and talk about 10 Rules Of Modern Beekeeping, and more. See his web page http://www.warmcolorsapiary.com/classes/ for more information. And maybe don’t sit too close to that pulpit – lightening hurts, I’m told.

So it’s really finally Spring, heading to Summer. Maybe. Mostly. But just in case, keep your veil tight, your smoker lit, and your hive tool handy. Time to go to work.