What will it take to permanently establish a truly mite tolerant honey bee in the general managed honey bee population?

Varroa destructor has been parasitizing honey bees throughout the United States for over 35 years and to date, efforts to breed permanent mite resistance into the honey bee have largely failed. The incredibly robust nature of the honey bees mating process helps ensure wide genetic diversity, a diversity that enables the honey bee to survive on six of the seven continents of the globe across the vast majority of latitudinal parallels. So far, the mating process of the European honey bee has precluded the ability for beekeepers to be successful in their attempts to raise, disseminate and maintain a truly mite resistant bee.

An abundance of suitors
Honey bees mate in places where the drones from colonies in the surrounding area congregate and wait for virgin queens to fly by. Mating takes place on the wing approximately 20-80 feet (six to 24 meters) up in the air, and it is the fittest and fastest drones that get to pass on their genes to future generations. Studies suggest that these drone congregation areas (DCA) stay consistent decade after decade unless a building is erected on the site.

DCAs attract male bees from quite a wide area. Researchers in Denmark and the United Kingdom found that while 50% of bees studied mated within about 1.5 miles (2.5 km) of their hive, a full 90% of the bees were observed to mate within a distance of 4.5 miles (7.5 km) (Jensen et. al., 2005). While the maximum distance the European researchers observed matings to occur was 9.3 miles (15 km), other studies have documented matings covering distances between 10.1 and 12.4 miles (16.25-20 km) (Peer, 2012; Szabo, 1986). As a rule, drones tend to seek DCAs near their hives, while queens will seek DCAs farther away. This behavior helps to reduce instances of inbreeding between brothers and sisters.

Queens typically mate within six to 10 days after emergence and on average, most queens will mate with somewhere around 15-20 drones over the course of one or two days (Koeniger et. al., 2014). Drones become sexually mature when they are around 12 days old. Mating flights of the queen and drones is highly dependent upon the weather conditions. Leaving the safety of the hive to participate in the mating process is a dangerous time for both drones and queens. Their relatively large size and slow flight speed make them vulnerable targets for a host of predators from birds to dragonflies.

Males designed for the job
While workers are extremely attentive to the queen within the hive, drones and queens pay little-to-no attention to each other inside the hive. Outside the hive however, the drone’s keen sensory organs allow them to identify queen bees easily. It is believed that the primary drone attractant that a queen exudes is a mating pheromone known as 9-oxo-2-decenoic acid (9 ODA) (No the x’s and o’s don’t represent hugs and kisses). Male bees are endowed with many more scent receptors on their antennae than workers or queens, and are reportedly able to smell very small quantities of 9 ODA, and detect this queen substance from up to 200 feet (60 m) away (Caron and Connor, 2013).

The drone is also equipped with large compound eyes that contain many more tiny lenses (facets) than the worker and queen. This allows the male bees to easily spot the queen after they have used her scent to navigate near the queen’s vicinity.

Typically, healthy colonies will produce the most drones, and colonies in the process of replacing their queen will tend to exhibit higher drone production than usual. In an apparent last desperate attempt to pass on their genetic heritage, the workers in queen-less colonies will start laying unfertile eggs and raising numerous drones in the hope that some of their sons may successfully mate with a virgin queen. 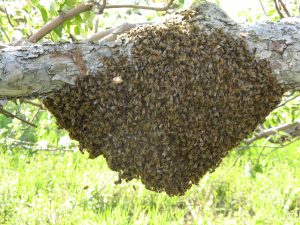 The genetic make-up of a honey bee colony changes whenever a colony swarms and replaces their old queen with a new one. This is the primary reason efforts to breed resistant bees, or just let bees naturally evolve to become resistant to mites, have failed so far.

The challenge of maintaining genetic traits
As described previously, the honey bees mating process makes it extremely difficult to maintain genetic purity without isolating the queens from the drones of colonies that do not carry the preferred genetic traits. This is why reports of truly mite resistant honey bees primarily come from colonies that have been kept in isolated locations such as on islands. Some queen breeders will flood areas with drones from selected colonies in an effort to overcome the likelihood that their selected stock will mate with local unselected bees. While this often works well for queen breeders, the average beekeeper that purchases these queens typically does not work to maintain the genetic purity of the bee strain, and the beneficial aspects that have been bred into the honey bee tends to get lost quickly through inter-breeding and hybridization of subsequent generations of queens.

This cycle of breeders working hard to improve their stocks and the loss of many, if not most, of the beneficial traits bred into the bees once they are in the general beekeeping community’s care will continue unless beekeepers make serious changes. Beekeepers would have to work to limit the opportunity for hybridization by either isolating their bees, or working to replace all the bees in an area with selected stock. Even then, there is always the significant likelihood that feral colonies in the area will inter-breed with managed colonies and dilute the gene pool with non-selected traits. The difficulty in maintaining specific genetic traits appears to be the reason why after more than three decades, the beekeeping industry is still not able to take full advantage of the mite tolerant and resistant strains of bees that bee breeders have had some measure of success raising to date.

The Africanized solution
I have come to believe a possible solution to this apparently insolvable problem is the Africanized honey bee (AHB). The AHB is a hard working bee with superior competitive foraging behavior and exhibits resistance to mites and many diseases. This bee also has unique mating characteristics that suggest that they may provide the answer to the hybridization challenges that the beekeeping industry faces in its efforts to breed and maintain specific genetic characteristics in the general managed honey bee population.

South America’s experience with direct competition between the European honey bee (EHB) and African bees resulted in the quick elimination of EHB in the tropics. Although a low level of hybridization has occurred, Africanized genetic traits predominate in the South American honey bee population (Schneider et. al., 2004) making them a challenge to work with due to their highly developed defensive behavior. Several factors are suggested to help explain the domination of AHBs over EHBs when it comes to mating.

Working with traditional breeding techniques to try to produce and maintain queens with specific genetic traits has proven elusive, but
perhaps nature can succeed where beekeepers and scientists have mostly failed.

Overwhelming numbers
Africanized bees have an extremely high swarming rate, with colonies being documented to swarm an average of three to four times a year and as much as every 50 days (Michener, 1975; Taylor, 1977; Winston, 1979). This means that under normal circumstances, new AHB queens are produced at a much faster rate than EHB queens. AHB queens also reach sexual maturity faster giving them a biological edge over EHB queens born at the same time. Even in colonies headed by an EHB queen that has mated with both EHB and Africanized drones, faster development of queens with Africanized genetics favor AHB queens. Virgin Africanized queens tend to emerge earlier, pipe more frequently and kill more rival queens than those with EHB genetics (DeGrandi-Hoffman et. al., 1998; Hepburn and Radloff, 1998; Schneider and DeGrandi-Hoffman, 2003; Schneider et al., 2004).

On the other side of the mating equation, AHB drones out compete their EHB counterparts when it comes to the mating process. First, Africanized bees raise proportionally more drones than EHB colonies. They also raise drones earlier in their population buildup cycle, and they have more drones present in their colonies throughout a greater portion of the season (Rinderer et al., 1987). This results in more drones being present in Africanized hives than in European hives. Since AHB drones use the same DCAs that EHBs do, they simply outnumber them and the odds that a virgin queen will mate with an AHB drone rather than an EHB drone increase dramatically.

Parasitism
AHB drones are known to regularly drift into EHB colonies where they are readily accepted in a behavior that is called drone parasitism, but the opposite is not true (Rinderer et al., 1987). Africanized bees rarely allow drones of other races, or of mixed race to enter their hives. Africanized colonies then raise more drones to replace those lost to drifting, while EHB colonies raise fewer drones due to the influx of AHB drones. This significantly decreases EHB drones in an area essentially flooding the area with AHB drones.

Africanized swarms are also known to take over EHB colonies through usurpation (queen parasitism). Swarming AHBs will land near the entrance of an EHB colony and the AHB workers will gradually make their way into the colony, kill off the EHB queen and replace her with their AHB queen. The opposite, usurpation of AHB colonies by EHB colonies is not known to occur.

Unique behaviors
Several special behaviors of the Africanized bee endow it with additional advantages over the European honey bee when it comes to species survival. African bees are more widely adapted to utilize a diversity of cavities for nesting and can successfully nest outside if nesting cavities are sparse. AHBs are known to migrate readily and abscond, abandoning sites with few resources or heavy predator activity in preference of more favorable locations. Africanized bee swarms also combine with each other more readily than EHB swarms, providing a greater chance of swarm survival.

The AHBs biological advantages, ability to parasitize EHB colonies and unique behaviors all appear to contribute to the success of the AHB in displacing the EHB in both tropical and subtropical environments. Under the open mating conditions prevalent through most of the world, the mating characteristics of the AHB suggest that it could succeed in anchoring mite resistant traits into managed bee populations where efforts to do so working with European honey bees alone have largely failed. The key to this approach would be in finding an Africanized bee that is gentle to work with but has retained the majority of its mating characteristics so that eventually most, if not all managed bees would carry the beneficial Africanized genetic traits of resistance to mites and disease.

Ross Conrad is coauthor of the Land of Milk and Honey: A history of beekeeping in Vermont.