An Ode To Turkeys

I’ve been on a business kick for the past few months, but I thought I’d switch gears back to homesteading as an ode to turkeys. My Scooter died a couple weeks ago, and after reflecting on it, I’m going to attempt to make the case of eating turkeys that are heritage breeds.

Everybody knows I love the turkeys. The kids are jealous of them sometimes. They get all the leftover eggs, hardboiled and peeled (they like the yolk best but will suffer to eat the whites if the yolks are gone), fresh kale, first choice at food scraps, and lots of attention. I had no idea that they would be so friendly when I started with turkeys, but they now vie for attention and will pull each other out of my lap.

As you might remember from my initial foray into turkeys, I only had Marshall and Scooter survive. Both were broad breasted turkeys, meant to be meat production birds and growing at a rate too fast to encourage flight or mobility. Scooter was always a little more mobile than Marshall for some reason. When I ordered them, I had a mixed variety of turkey breeds, but I had accidentally ordered the totally random mix, rather than the heritage breeds only. My second go-round, I ordered Bourbon reds, Slate blues, and Royal Palms. These birds are much more mobile, able to fly (sometimes that’s an unfortunate thing), and a little more aggressive on the male side. They always defer to Marshall and Scooter though, which I think is interesting. 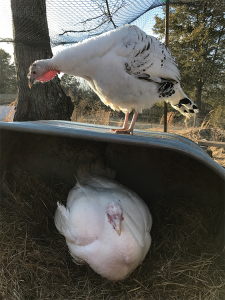 Marshall in his new house with Princess on top. 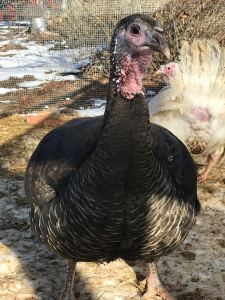 Scooter, with Marshall’s butt in the background.

My heritage boys are quite large, and fluff up dragging their wing feathers on the ground, and flap their snoods around all haughty-like, but they are still nowhere near the physical body mass of Scooter and Marshall. When Scooter died, I could barely lift him to get his body out of the pen. He was just a bit over 40 pounds. He (in reality, I think he was a she) never developed any sort of snood or beard, and did not strut at all. Marshall also shares this lack of physical maturity characteristics. Neither Marshall nor Scooter could perch after they were about five months old, and Marshall has never been able to hop up more than a few inches. I ended up adding some new accessories to the turkey pen after I realized that both of them were sleeping on the ground. In particular, about 10 bales of hay now coat the bottom of the pen. I suppose come Spring that will be some amazing compost, but for now, it gives some cushion to the ground and keeps them a little less muddy. We have a steel cow trough that is normally used as a chick brooder that I turned on its side and put in the pen. Even though there’s a roof on the little shed part of the pen, it’s mostly to keep the feeders dry. Most of the turkeys sleep on top of the roof or on other perches in the pen. Now, Marshall can sleep in the trough and be on the ground and dry, but it gives another place for the other turkeys to sit higher up.

When Scooter died, I decided to build another perch for the turkeys in memory of him(her). We’ve been trying to clean up some of our hoarding ways to be able to move easier, and took three trailer loads of bee trash to the landfill in the past couple weeks. I saved some of the boxes that were still in okay shape but that I wouldn’t want to put bees in, and used them to make a double platform for slats. We had leftover chicken pen lids as well that fit perfectly into a sideways hive body and makes a walkway for the smaller turkeys to go through the boxes. It’s next to the shed part of the pen, but it gives the turkeys a place to hop up and down without going through the shed sides (bee box openings). Lately, the weather has been pretty bizarre, going from -2° all the way to 74° in a span of maybe 10 days, so we’ve been worried about the bees surviving. Apparently, some of our hives did because the chicken and turkey feeders have been swarmed with bees taking over and making pollen baskets out of the high-protein food. It’s not been warm enough consistently for us to put pollen patties in the hives, but I’d imagine they’ve started rearing brood and don’t have anything natural to collect at this point. The turkeys are not fond of the bees, but they’re not as scared as the chickens. Occasionally, one of the chickens will get stung in the face, so they know to avoid the feeders during bee time. The turkeys will sometimes eat around the bees, but if it’s covered, they back off too and get really upset about it. You can hear them angry gobbling through the walls of the house. 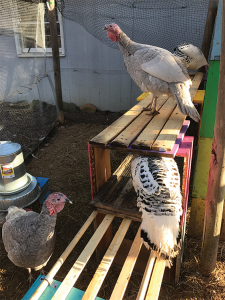 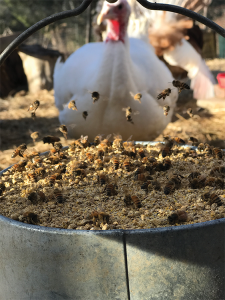 Marshall and Scooter were not afraid of the bees, probably because the desire to eat overrode any sense of fright. Marshall in particular is a glutton. He will haul himself off the ground and stand long enough to eat at the feeder when it’s refilled, as if the “new” food from the bin tastes better than the old food. It probably is less picked over, since I expect the bees are taking some of the molasses if they can. Eating is what motivates them the most. Since I’ve realized that they were the breed of turkey sold in grocery stores, I don’t think I’ve been able to eat any. It’s not that I’m against eating meat or turkeys, as I had originally intended to eat mine. It might have been different if Marshall and Scooter hadn’t been in the batch, but realizing what sad lives they have made me feel a little bit sick about it. I don’t think many turkeys have a life where they sit on the back steps and get cut and pitted cherries hand-fed to them, but nothing I did was going to really make their quality of life better due to their breeding program. I also can’t eat my own birds now because they bond to people so easily. I guess if I eat turkey again, I will be finding a local turkey farmer who sells heritage breeds for meat.

Just as a size comparison, here’s the average listed weight for each of my breeds based on McMurray’s expectations: 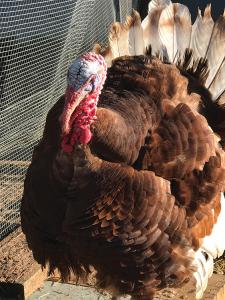 I am not positive of the breed for Scooter and Marshall, but I am pretty sure that Scooter was a Broadbreasted Bronze and Marshall is a Giant White, although he looks more like he should be a broad-breasted white. I just didn’t see that as an option, but they may also not sell those anymore or have them in stock. My biggest and tallest turkey right now is a Bourbon Red named Chocolate Thunder. He’s about three feet tall and king of the pecking order. The turkeys are now coming around to their six month old mark, and starting to grow beards. Some of the boys are having a rough time with their snoods and being able to eat without biting themselves. The girls will also peck at their snoods if the guys get too close to them. So far, the boys have been a bit aggressive to each other, but are not human aggressive in the least and enjoy coming up to beg for food. They will all follow you around like a pack of expectant puppies. Princess, my favorite girl, will hop in my lap as soon as I sit down in the pen.

Our biggest concern with the turkeys now is being able to move them safely. We are still looking for a farm to move to once Henry graduates in June, but the market is pretty slim right now. How we are going to move all these birds is going to be an interesting predicament. It’s looking like maybe dog kennels right now. For the chickens, a cat carrier will work but it will take multiple trips. We do have a few chicken crates that will hold maybe six birds comfortably. The guineas will be the most difficult because they roost at night in the top of the pecan tree, so I don’t know how we are going to catch them in the first place. Once we get the new place set up, I think the turkeys will have a larger pen so they are a little less territorial, among the boys at least. It will also give me room to make a turkey playground. I’d like to get more, but they are pretty expensive as far as pets go, and I haven’t had them long enough to see if there’s much of a market for turkey eggs. I’ve been selling the nicer feathers, and also making them into ornaments. I took some of Scooter’s feathers to make a memorial ornament for him. I’m thinking about using them as marketing and having a “feed the turkey for $0.50” the next time we have a honey booth. I bet we’d make at least a couple dollars!

Jessica and her family are working hard, living the dream with kids, bees and poultry in North Carolina.

Mountain-dwelling East African honey bees have distinct genetic variations compared to their savannah relatives that likely help them to survive at high altitudes,…