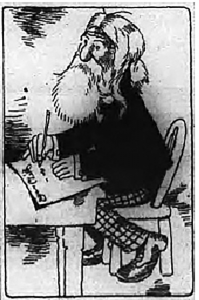 He was the latest victim in a string of robberies in and around the village of Dresden. The sheriff, Case Blodgett, had a pretty good idea who stole them, but needed hard evidence before he dared to act.

A resident had noticed some unusual activity at a neighbor’s barn and reported it to the Sheriff. Obtaining a warrant, Blodgett, along with Keefer and two deputies, entered the barn where they found lanterns, sheet lead, canned goods, silverware, and other property belonging to Dresden residents and the New York Central Railroad. There were no bee hives.

The men turned to the house. The occupant, Zimri Norman, aged 44, had a police record from twenty years before, and two years earlier had been declared legally insane. He had recently been discharged from Willard State Hospital for the Chronic Insane.

“Zimri!” Sheriff Blodgett called from the yard. “You in there?”

No one answered. Blodgett tried the door. It was unlocked. There was a fire in the cook stove. They searched the upper and lower floors. He lifted the trap door to the cellar, revealing a staircase descending into the darkness. He and Keefer carefully felt their way down, while the other two men posted guard upstairs.

Standing on the stair landing, their eyes adjusted to the dim light. A stove, still hot, stood along one wall with a large steaming cauldron on top. The air reeked of scorched bees, wax, and honey. Someone had been boiling bees and honey combs together to separate the honey from the wax. Buckets of boiled honey, wax, and dead bees surrounded the stove. Sheriff Blodgett started toward a door leading to another section of the cellar when Keefer pointed to a large heap of rags in the corner. “It looks like someone’s over there,” Keefer whispered.

“Boys!” Blodgett called up the stairs, “Get me a pail of hot water off that stove. I’ll find out if anybody is there.”

The pile of rags shifted as Zimri slowly stood up. At six feet, six inches tall, he towered over the other men. His scraggly beard covered his chest and his untrimmed hair hung below his shoulders. “What do you want?” he asked.

“I’d like you to come upstairs with us.” Walking toward the stairway, Blodgett saw Zimri’s hand move toward his hip pocket. In a moment he relieved Zimri of a large caliber handgun, a gun big enough, Blodgett said, to “shoot across Seneca Lake”.

He was taken into custody without further incident. Tried and convicted, Zimri Norman spent six months in the Monroe County Penitentiary. After serving his time, he returned to Dresden, entered the office of Justice Randolph, the man who sentenced him, and thanked him for placing him in such “good society”, far superior to the company he had experienced at the State Hospital for the mentally insane.

This incident appeared in the Penn Yan Democrat newspaper in May, 1919. Fifty years later, when I was a teenager, my family moved to the picturesque village of Dresden, NY to a house just a couple blocks from Zimri Norman’s. My friend Mark and I walked around Dresden, interviewing people who still remembered him. We explored that house, long vacant, including the cellar where Zimri rendered the stolen honeycomb. I mowed and trimmed the grass around his grave in the town cemetery. I only dimly remember the stories, but Zimri’s eccentric life made a lasting impression on the residents of Dresden.

When Zimri rode into town on his high bicycle, children scattered and hid like rabbits. He had tried raising rabbits, but someone released them. He was a musician and organized “Zimri’s Band”. He tried teaching the violin, specializing in psalms and hymn tunes, but couldn’t find enough students. He tried crime, stealing railroad property and ended up in jail. He set up shop in Penn Yan as a fortune teller until they shut off his gas. He tried and failed again in Corning and Elmira. He predicted that an “awful calamity” was coming, but was sworn to secrecy as to its nature. Every venture failed and he was treated with ridicule and contempt in the local newspapers.

When the Great War broke out in Europe in 1914, he walked into Miss Depew’s classroom and accused her of teaching military tactics to the students, preparing them for war and the annihilation of Yates County residents. Two days later, Zimri was declared insane and committed to Willard State Hospital, his first term.

Zimri Norman was an inventor. He invented a rail car coupling system, and claimed to have invented a telescope lens cutter. He spent 20 years perfecting his most famous invention – a perpetual motion machine. By the time of his “dabbling in the honey business”, he had attempted to patent the device, but Washington, DC patent attorneys told him it would cost $10,000 to secure world patents. He was trying to sell stock in his company at the time of his arrest. I talked to a man who remembered seeing the machine in operation – metal spheres spinning around a center shaft, and enclosed in a glass case. He could not tell how it worked. Zimri claimed to have hooked up his “rig” to a family clock which had not needed winding for three years.

In July, 1921, he was picked up while asking for the whereabouts of a certain girl. He claimed to be Bluebeard and bragged that he had already killed four women. In September, after a second catch-and-release from Willard, according to newspapers, he was found lying in an outhouse, sick and helpless. Dresden residents told me he was under the outhouse and no one dared go in and pull him out because of the filth. He was declared insane a third time. Sheriff Blodgett took him to jail, shaved his head, and gave him a cold bath. The shock almost killed him. He returned to Willard.

Released again, Zimri continued to search for backers to fund his patent applications. He moved to Auburn and changed his name to avoid the stigma of his past. He died in 1925. According to the Weedsport Cayuga Chief:

“Zimri Norman, 50 – former inmate of Willard State Hospital, and self acclaimed discoverer of perpetual motion died in the poverty of a squalid shack where he lived alone. Norman lived an eccentric life, working very little and seeming to enjoy his poverty. He never begged charity from his neighbors or the city and even resented their help when they attempted to help him.”

He is buried in the poor end of the cemetery, by the railroad tracks within sight of the family house. There is sometimes a fine line between genius and insanity. The newspapers never mention that Dresden’s hymn playing musician turned honey thief and mad scientist started out sane. He had a wife, Grace, a son, Robert and two other children; Edward and Mary who both died in their first year – Mary probably while Zimri was serving his first prison term. A combination of tragedy, crime, relentless public ridicule, and the stigma of multiple trips to an insane asylum could not quell the optimism that he and his stock holders could someday make millions with his fantastic inventions. The least posterity could do for him is to give him a place in the ranks of great American folk heros.