I don’t know what it is about beehives. Even if you have only one, sooner or later it will probably need to be moved. No brag intended here, but I have spent a lot of time, in total darkness the early hours, moving bee colonies. It’s interesting that when things go well, few memories are formed – but when things go wrong – the event becomes impossible to forget. At this moment memories flash through the thumbnail viewer of my mind – rain, missed turns along the road, bearding bees on the front of hot colonies, bottom boards dropping off, lost hive tools, locked field gates, dysfunctional flashlights and dysfunctional smokers.

Years ago, I wrote several descriptive Bee Culture pieces with titles like Moving Bees and Other Frightening Stories in which I relived several harrowing beehive moving experiences. I don’t want to do that here, but I would like to describe my present situation.

As you are painfully aware, I have written time and time again about my interaction with my neighbors. They continue to be good neighbors and tolerate both my bees and me without serious complaint, but I still want to do my own part to be a good neighbor to them.

What modern-day beekeeper does not know that a high fence is the premier structure for barricading apiaries from neighbors? So I have decided to fence my home apiary for general appearance and to reduce the visual effects of me working my bees. Here’s the rub. I can’t have fence installers putting up a fence with my bees flying everywhere. My hives must be temporarily relocated. Yes, it’s true. I must move my beehives until the fence is in place.
Just now, the ground is soggy, soggy wet. The hives are heavy and I am increasingly an older man. This move could be a problem, so, I’m off to a good start. I will do this task alone and, as usual, photo the various events and report – good or bad – on the fence caper that I am only just beginning. What follows are questions and issues that must be addressed to successfully get this moving task completed.

Variables of all hive moves

The following variables affect potential hive moves. Each variable should be dealt with appropriately.

Long trip vs. a short trip

I am only planning to move my eight colonies about 15 miles away to a friend’s farm. That short distance should help make things a bit easier. Obviously, long moves are more challenging than a local one. Local moves seem more conducive to sloppiness. You don’t have to pack the colonies as tightly. You don’t have to tightly close the entrance or provide a top screen for ventilation. You can do a better job of choosing your weather (“It’s raining tonight so I will do it tomorrow night.”) or you can more readily justify other risks (My trailer tires are worn, but they should make the short trip okay.”)

But having said that, if you want the short trip to go as easily as possible, load the bees as though you were moving them 500 miles. It’s more work and easier said than done, but it will really help things go smoothly. 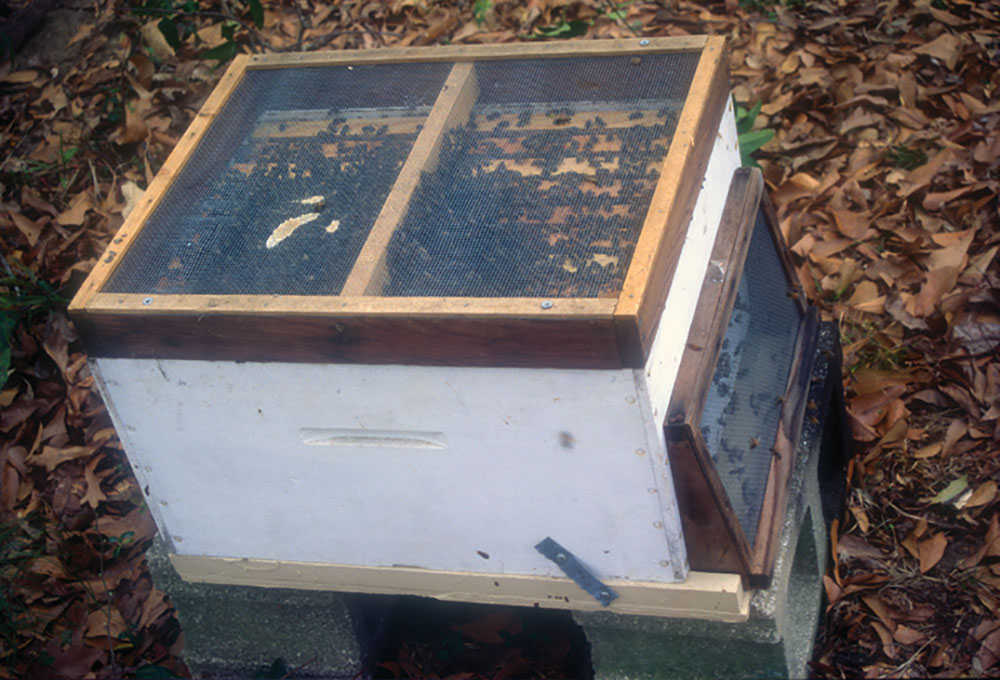 Hive equipment that is securely secreened on top and bottom.

An experienced friend as a helper

Increasingly, an experienced friend who will help you move colonies is more difficult to find than Jumbo-depth frames. Some of us have them while some don’t. You should know that, at times, you might become the friend of another beekeeper with a moving problem. Then it will be payback time. Through the years, I have gone through two brothers (I have no sisters or I would have surely have asked them, too.), cousins, parents, uncles, distant relatives and casual friends. I must provide protective gear and duck tape them into oblivion to get them ready. I am pretty much at the point now where, if I decide that I need help, I must use money to find someone (anyone) to help with a hive move. Make no mistake – moving established hives is hard work. Looks like I will be doing this alone.

Forget it. I’ll just do it myself

That decision is made a lot. Sometimes you just can’t find another to give you a hand. Ironically, the basics of hive moving are pretty much the same whether or not you have some to help. Never leave home without a mobile phone. A GPS device is helpful, too. What an unbelievable luxury this technology is compared to hive moves thirty years ago.

I know that I said that I will primarily be discussing a single-person hive move, but two-person hive carriers still need to be mentioned. Such carriers, in someway, clasp the hive handhold and temporarily provide handles for moving the colony. Such carriers are lightweight, reasonably inexpensive and available from most bee supply companies – but they require two people to make the move happen. 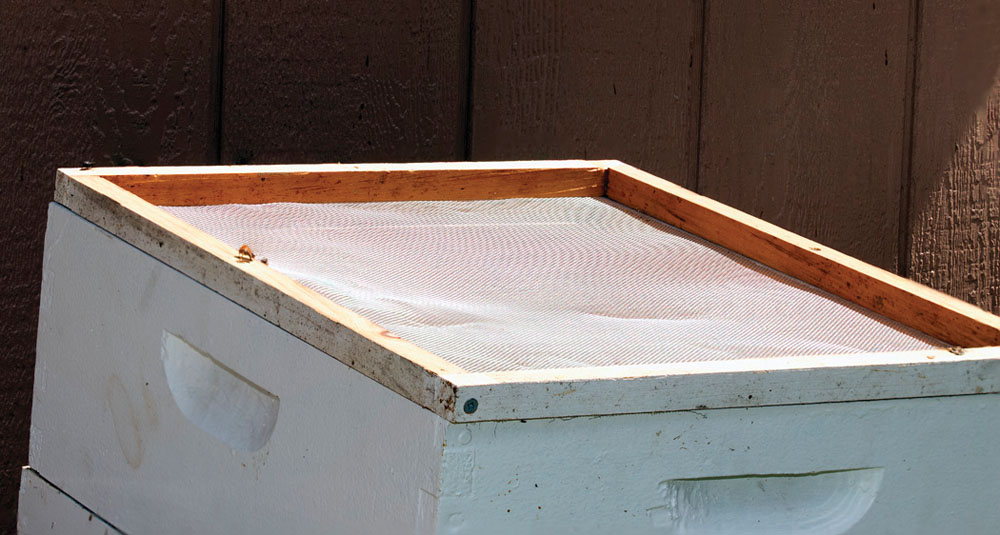 Ideally, your equipment should be in sound shape – no holes, no rotted corners, no broken bottom boards and good, solid tops. For dependable moves, colonies should be screened – entrance and top – especially for strong colonies. Chilling a hive is rarely the problem – but the potential for overheating is a real danger.

Using either straps, staples or wooden battens, the colony should be secured as a unit. For the small-time keeper, ratchet straps are the primary tools for securing hive parts. Hive staples are still used but not nearly as much as they were several decades ago. Do not depend on propolis holding the hive together (Unless you want to acquire your own Moving Hives story.) Generally, the hive should be top-screened with eight-mesh hardware cloth and aluminum window screening across the lower entrance. The top screen is held in place with long screws. The entrance device is also held in place with screws. Catalogs offer other entrance-closing devices that are commercially manufactured.

Aluminum window screening has been traditionally used to close the entrance. Cut a piece about 4” wide and about 2” longer than the entrance. One end of the cut piece is folded at a point where it exactly fits in the entrance lengthwise. Then, the end-folded piece is lightly folded down the longitudinal center and pushed into the entrance. Normally the “spring” of the lightly folded screen is enough to hold it in place. If you have doubts about it staying in place, staple it a few times. Fiberglass screening is more readily available and possibly cheaper, but it will not stay in place on the entrance unless securely stapled along the front of the hive.

The two most common devices used to prepare a hive for a short move are probably ratchet straps and window screening. For a longer move, a top screen should be added to the mix. Commercial beekeepers use plastic nets to cover the entire load when moving hives long distances. Such netting is expensive and is beyond the economic reach of many smaller beekeepers. For the most part, commercial beekeepers and beekeepers moving only a few colonies, do not secure colonies in the same manner.

Picking up the hives

I have harped and harped about the fact that our beehive design is not perfect. My opinion of the primary imperfection is that two people are required to lift the two-story colony. That imperfection comes into play at this point. Without a doubt, the most strenuous aspects of colony moves are getting the hives onto and off of the truck (or trailer or out of the car).

Unless you are exceptionally strong, don’t attempt to lift the hive manually. In years past, I have used a low trailer and a ramp. I hand-trucked the hives up the ramp onto the low trailer. In even more years past, I had a bumper mounted lifting crane attached to my truck. Yet another truck had a hydraulic tailgate. These devices really made my bee life easier, but they were expensive and sometimes cumbersome.

I can’t be more blunt – getting the hives on and off the truck is work. A combination of hand trucks and ramps will probably meet most hive move needs. Now, having said that, a hand truck – loaded with a heavy hive – can be remarkably unstable when used on soft ground. The wheels are too close together, but if I conceptualized a hand truck with a wider wheelbase, hence more stable, it would be difficult to maneuver it in the confines of the truck (or trailer).

One way or another, the hives are on the truck

The frequent tendency is to get the hives on and truck and take off – It’s only a short drive. Squelch that tendency. The most unexpected things can go wrong. One dark night, a State Highway Patrol officer who was unaware that I had open, un-restrained hives on board pulled me over for being on the short side of a yellow traffic signal. When the load of bees was found, I was promptly sent on my way with a quick admonishment.

More often, the problem arises when the path to the new location is rough, requiring bouncing and banging the hives in the process. A bottom board only must slip a small amount to allow frustrated bees to escape. (There goes the loss of another friend.) So, again, I strongly recommend that you secure the hives, with braces or straps, within the truck (or trailer). Getting the hives onto the truck is only half the process. 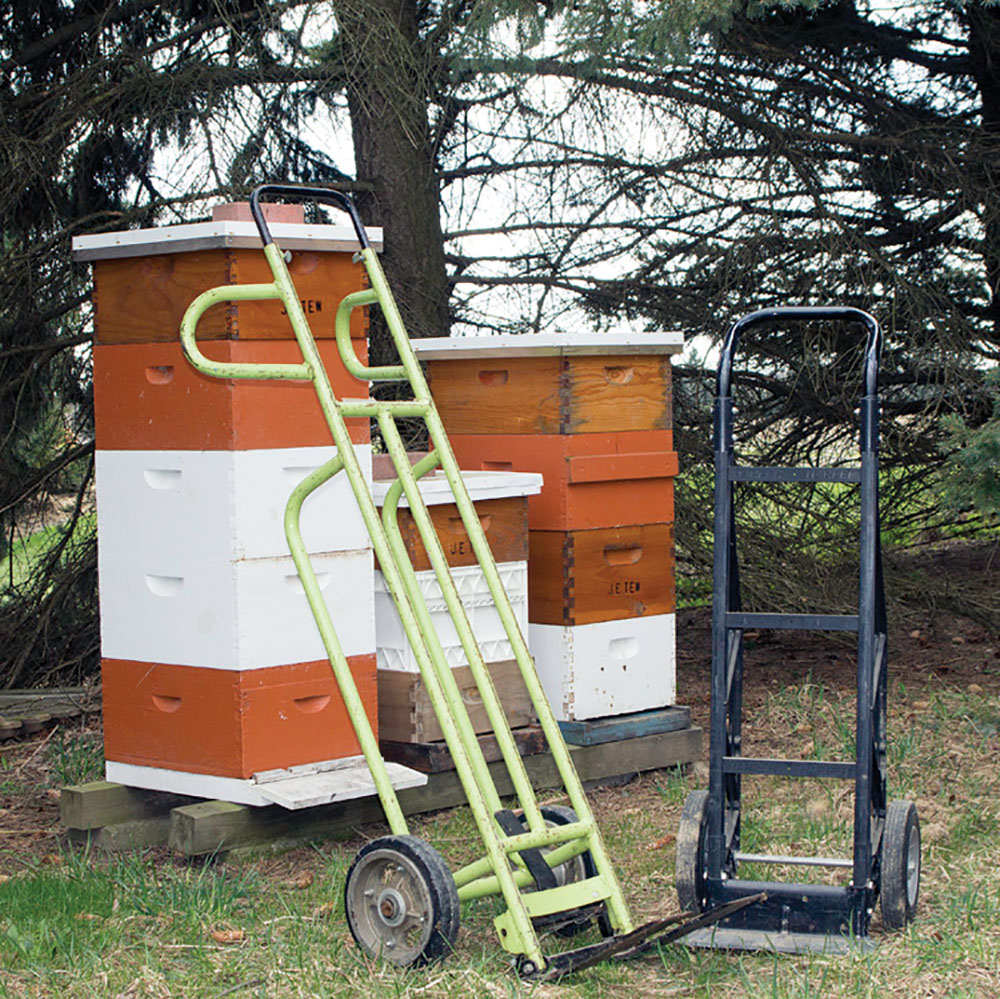 A hand truck is vital for the one-person hive move event.

Must hives be moved at night?

Hives can be moved during the day. Naturally, some part of the field force will be lost, at no small cost to the hives. But moving hives during daylight hours is easier in some aspects. Many times, a beekeeper will leave a hive or two to pick up the field force of returning bees. Later, the remaining hive or two are moved – all much easier than having larger numbers of hives at night.

The downside of daylight moves

Obviously, you will need to make two trips if you leave catch-colonies at the old location. A second trip may or may not be practical. Secondly, during daylight hours, you will have a lot more of society with which to deal. Traffic lights, school buses, and congested traffic can make you more apprehensive. Under the cover of night, you can hide more of what you are doing – so you are exposed to fewer people, but you work in the dark.

Not as bad as it sounds

Moving hives is not as bad as I have made it sound, but the uneventful beehive move is rarely discussed – only those moves that blow up get coverage. Be prepared and be confident.

Some suggestions for making the hive move go easier

Have a good, big flashlight (and a spare)
Always, always lay your hive tool and your smoker on something other than the ground.
Have a roll of duct tape nearby.

For longer moves, take a water hose sprayer to wet down hives should they begin to overheat.
Have basic tools for repairing or repositioning hive closing devices and hive components.
Have multiple packs of matches and readily available smoker fuel.

Know where you are going. Landmarks look different in the dark.

Do not depend only on propolis to hold a colony together during a move.

Only use protective gear that is in perfect shape.

Take some water to drink. That always helps.

I will let you know

No doubt, I will let you know how this turns out in next month’s article. I hope it is a boring report.