The Queen’s Bees Have Been Informed of Her Passing

The Palace beekeeper explained to his wards what all the humans have been buzzing about. 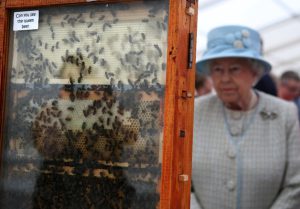 On Friday, John Chapple, the 79-year-old official Palace beekeeper, performed a sad, traditional task. It fell upon him to inform tens of thousands of bees about the death of Queen Elizabeth II. As reported in the Daily Mail, Chapple travelled to Buckingham Palace and Clarence House to perform his opposite-of-sweet duty. He spoke “in hushed tones,” no doubt to try and take the sting out of it.

Chapple placed black ribbons around the hives, and then told the busy workers inside the news. He also explained that King Charles III is now their new master, and that he will be good to them.

“The person who has died is the master or mistress of the hives, someone important in the family who dies and you don’t get any more important than the Queen, do you?” Chapple said to the British newspaper. Getting into the nitty-gritty of it, he explained, “You knock on each hive and say, ‘The mistress is dead, but don’t you go. Your master will be a good master to you.’”

In the thick of summer, Chapple, who has held his position for 15 years, cares for over a million Royal bees. He refers to this work as a hobby, as he is retired, and hopes that “the new tenant of Buckingham Palace” will want to continue keeping bees on the premises, and that he’ll maintain his role. “You do never know,” he said, concerning stability in the monarchical beekeeping economy.

The centuries-old tradition of “telling the bees” comes from a superstition that if bees are not informed of their master’s death, they will stop producing honey. It is believed the custom has Celtic roots, and continues through folklore in England, Wales, Ireland, Switzerland, The Netherlands, France, Germany, and parts of the United States.

In Celtic mythology, bees were considered messengers between this world and the spirit realm. One story goes that when the Gregorian calendar was adopted, the bees were not kept up to speed, and refused to hum on the new Christmas Day. (A figgy pudding without honey?!) The 19th century American poet John Greenleaf Whittier was so inspired by the act that he penned “Telling The Bees” in 1858.

We are here to share current happenings in the bee industry. Bee Culture gathers and shares articles published by outside sources. For more information about this specific article, please visit the original publish source: https://www.vanityfair.com/style/2022/09/the-queens-bees-have-been-informed-of-her-passing