Summary: Portland Urban Beekeepers (PUB) hosted a delegation of enthusiastic, young Afghani veterinarians and agrarians at the Portland Urban Beekeeping (PUB) treatment free apiary located at Zenger Farm, SE Portland, OR, a sustainable, educational, urban farm. The delegationís U.S. visit was financed by the U.S. Department of State arranged by the World Affairs Council of Oregon. Following a hands-on experience with beekeeping practices, the group moved on to Ruhl Bee Supply to discuss standard beekeeping equipment and chemical treatments for Mites and Foulbrood. The PUB beekeepers demonstrating honey bee care and health management were: Tim Wessels, the founder of PUB and Past President, Linda Zahl the PUB Director of Education, Bill Catherall the current PUB President and Dewey Caron, Professor Emeritus of the University of Delaware. https://portlandurbanbeekeepers.org/2016/01/18/afghanistan-delegation-visit/

In August, Portland Urban Beekeepers (PUB) accepted an invitation from World Affairs Council of Oregon www.worldoregon.org to host a delegation of nine veterinarians and agronomists from Afghanistan. The officials, on their first visit to the U.S., courtesy of the U.S. Department of State, were observing basic safety protocols of U.S. farmers for maintaining livestock and small animals, learning Best Management Practices (BMP) for agricultural and veterinary professionals.

In most countries around the globe, apiculture is regulated by agencies composed of and administered by veterinarians. This is not the case in the United States. To break the ice, one of PUBís members, Linda Zahl, welcomed them, as she describes, in her pre-school Farsi, which elicited laughs from all nine of the young men (Farsi and Dari, Afghanistanís national language, are sister languages) so we could converse in English. Once everyone recovered from laughter, and fortunately since most of the participants had a passing knowledge of English, ideas and conversations began to flow among all participants.

Only one of the delegation had personal beekeeping experience. His father, a farmer in Charikar Province, was a beekeeper. He explained that beekeeping is not widely developed in his country. In Afghanistan, the eastern honey bee, Apis cerana, is more widespread and easier to manage than the western honey bee. Those farmers who have kept Apis mellifera find American Foul Brood (AFB) to be an extremely destructive reality. †In addition, they have to deal with and control varroa mites, if their colonies are to produce surplus honey. Another issue with the western bee, discussed in detail, is swarming, which their climate encourages. A benefit to Apis cerana is that it is very varroa resistant, AFB is not a serious disease and it is a good pollinator. Honey harvest with the eastern honey bee however is minimal.

Most of the members of the Afghani delegation had significant teaching experience and all oversee programs that assist farmers. They function in roles similar to the Land Grant University Extension Service agents in the U.S. About half also function in Rural Microfinance programs. Specifically, two of the young professionals oversee programs which help women supplement their income by becoming backyard beekeepers in their districts. It was significant that PUB, being a backyard beekeeping club, host this beekeeping education experience. Linda was asked to be a future resource to the women beekeepers they serve.

During the Oregon portion of their 21-day visit to the U.S., they also visited the Department of Veterinary Medicine and the Department of Rangeland Sciences at Oregon State University, which has one of the few honey bee labs in the US. In addition, they visited a large pumpkin patch farm on Sauvie Island and participated in a harvest festival there. Two months later, the Minister of Agriculture was also a visitor to Oregon. 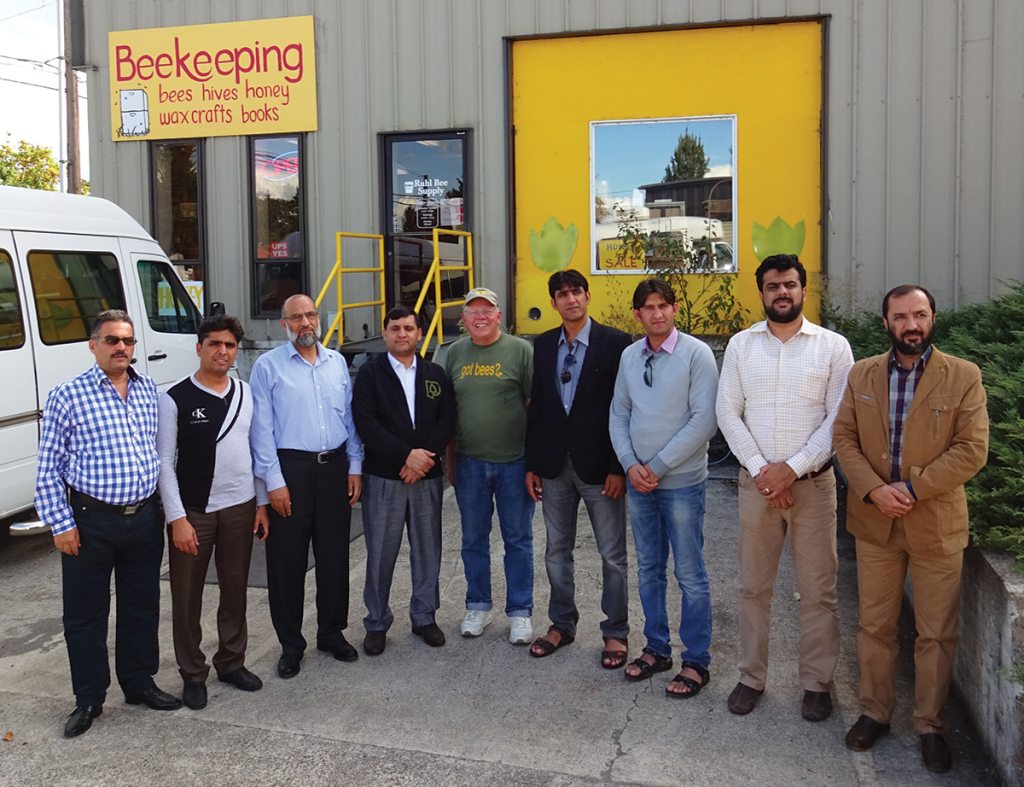 One of the veterinarians explained that, despite the desire of farmers and women to learn backyard beekeeping skills, there is a lack of basic educational programs in Afghanistan. Along with the lack of accessible information, beekeeping equipment and supplies are scarce, antibiotics for AFB and pesticides for varroa are not readily available and, in most cases, are cost prohibitive. A few U.S. National Guard agribusiness development projects have beekeeping components, most notable projects administered by the Georgia, Kentucky, and Tennessee National Guard.

During the afternoon visit, PUBís four representatives, comprised of Past president and PUB cofounder Tim Wessels, Pub Education Coordinator Linda Zahl, Current President Bill Catherall and PUB advisor Dewey Caron, took the delegation through several colonies at the clubís apiary located at Zenger Farm. This facility in SE Portland is an urban farm which promotes and serves as a working example on sustainable food systems. The apiary, established years ago by a grant from Heifer International, is now maintained by PUB board member Lauren Smith and a committee of club members. It serves as a teaching/ demonstration apiary for club members and the general public and as a facility for individuals in the Oregon Master Beekeeper program to become familiar with bee stewardship. 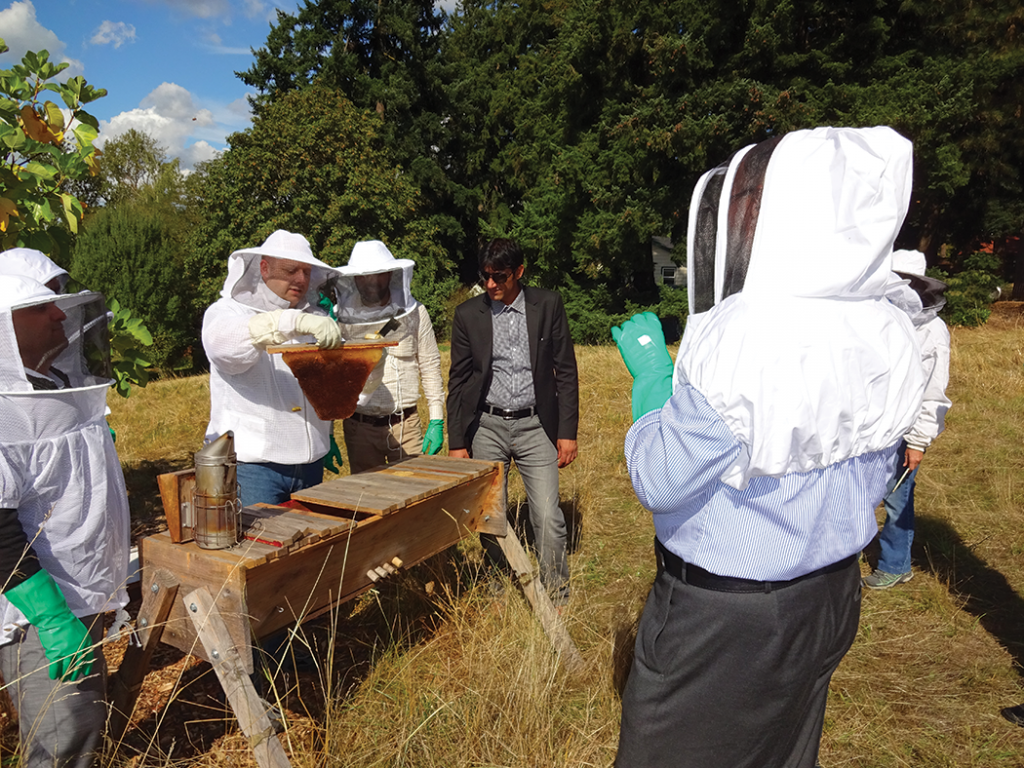 The delegation’s visit was participant driven. Given the difficulties in obtaining varroa control chemicals in Afghanistan, there was much interest in alternative strategies for controlling Varroa, given that the Zenger farm apiary is managed as a treatment-free apiary. The visitors were encouraged to see, smell, touch and listen to the functioning of healthy as well as not so healthy colonies. In addition to working with Langstroth hives, alternative Top Bar and Warré hives were observed. Before leaving the field, all ate local farm grown vegetables and fruits directly from the field, courtesy of pollination by PUB bees. 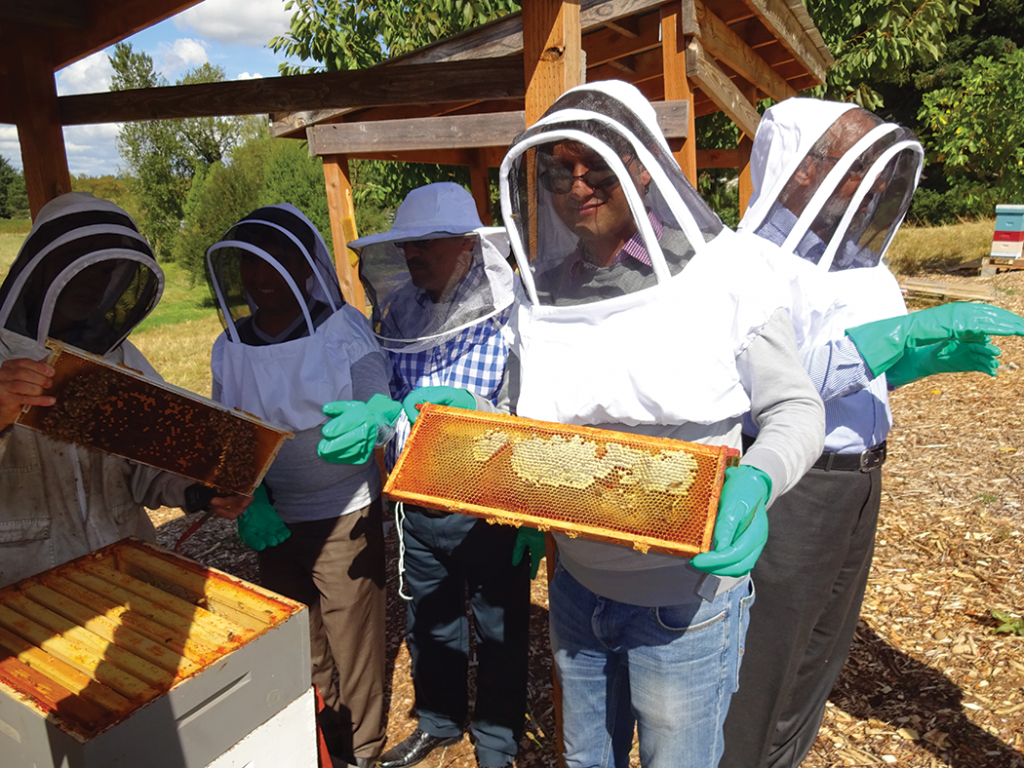 Following the apiary visit, the delegation visited Ruhl Bee Supply (now a division of Brushy Mountain Bee Supply) where antibiotics and pesticides, along with basic bee equipment, were reviewed and questions answered. Ruhl donated the veils and gloves to enable the visitors to get up close to the Zenger colonies.Members of the Afghani delegation expressed a keen interest in Oregon beekeeper strategy for the treatment of Varroa and other diseases.

As the afternoon came to a close, all of the participants considered the afternoon a success with information presented and received. It was hardly a one-way exchange as we learned about their program challenges. A lasting benefit was in establishing professional links as emails were exchanged. Perhaps the most important part was in friendships, smiles and laughter shared.