Just imagine returning home relishing setting down overfilled grocery bags, and sitting in the shade with a nice cup of tea on a hot day, when, instead, you notice the biggest swarm of the season settled in your front garden and immediately you’re propelled into swarm collecting mode!

You might sling the shopping in through the front door and focus on the job in hand spending ages rushing about collecting all the items needed for successful swarm collection. Even if you are a very well organised beekeeper, who needs only to collect the carefully pre-packed swarm collection kit, you might still wonder if the bees will be hanging there when you return to the tree.

If any of these responses sound familiar, then you will be delighted to learn that swarm bees give warning signals prior to takeoff, and the well informed beekeeper can easily take advantage of them to predict, and even halt, the departure of the swarm.

Bernd Heinrich, (1981) insect physiologist and pioneer of temperature control studies in insects, discovered the requirement for honey bees, in a swarm, to warm their wing muscles to at least 35oC (95oF) before takeoff, though he was not aware of the process by which all the bees in a swarm synchronously attain the optimum temperature for flight. By the way, have you ever, out of curiosity, poked a finger into the middle of a swarm and felt how amazingly warm it was in the center compared with the outside, and wondered what was happening in there? A four-pound swarm can generate enough heat to power a forty-watt light bulb, so it is pretty warm in the centre of a swarm.

Individual bees are endothermic which means that they can generate heat by themselves, and so can maintain their own thermal homeostasis. A bee generates heat by working her wing muscles, located in her thorax. A bee produces much body heat while in flight, but she can also activate these wing muscles (i.e., shiver) while not in flight, either to warm herself or to help keep her colony’s broodnest toasty warm, 33-36oC (91-97oF).

A cluster of swarm bees is therefore “warm blooded” and can regulate its temperature by adjusting its heat production and by clustering more tightly when the ambient air temperature drops below about 18oC (65oF). Cluster contraction conserves heat by reducing the surface area over which heat can be lost, and by also reducing internal convection currents. When the temperature falls to 14oC (58oF) the swarm cluster develops an outer mantle of bees in a quiescent state of just hanging motionless, whereas in the core the bees have some space to move about. 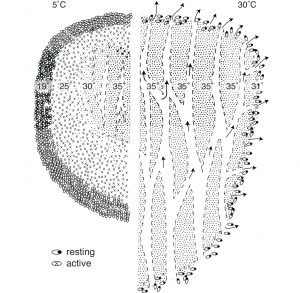 Figure 2. Temperature profiles of a swarm at low (5oC=41oF) and high (30oC=86oF) ambient temperatures. Diagram shows the positions of bees, channels for ventilation, losses of heat (arrows), and areas of active metabolism (crosses) and resting metabolism (dots). From Honeybee Democracy (Princeton University Press) and used with permission from the author.

You can see, in Figure 2, how a swarm regulates its collective temperature at different ambient air temperatures; on the left side it is only 5oC (40°F), and the bees are having to work hard to actively maintain the temperature between the core (35oC) and the mantle (19oC). A hot day of 30oC (86oF) is illustrated on the right, and bees in the mantle are mostly at rest with some active bees, most likely to be scouts. The channels between bees allows air to circulate by convection helping keep the temperature in the middle uniformly 35oC (95oF), whilst the mantle is 31oC (88oF).

But how does all this relate to swarm takeoff? Well, typically a swarm of about 10,000 honey bees hangs in a beard-like cluster from a solid object, often a tree, whilst the 300 to 500 scout bees go and choose a new home. They may hang for a few hours, or a few days, until a quorum of scouts has built up at one of the sites, which marks the end of the scouts’ decision-making process. Then it’s time for all the bees in the swarm to travel to the new home site and start moving in.

Work on swarm thermoregulation by Seeley and Tautz (2001) revealed the mechanisms by which all the bees in a swarm become suitably warmed and flight-ready with their wing muscles heated to 35oC (95oF) which is close to our core body temperature. The entire swarm knows when to warm  up because around 100 of the scout bees who have visited the swarm’s new home site give the remaining 9,900 or so swarm-bees a clear signal to warm up their flight muscles to 35oC (95oF) to be ready to launch into flight.  The signal first occurs around an hour before takeoff and comes in the form of piping which is easy for the beekeeper to hear by listening with an ear close to the swarm. This is usually possible as most swarms are extremely calm and settled, unless the bees are starving, or have been hanging in the open for a long period during poor weather. The piping noise is generated by a worker bee pressing her thorax, with wings pulled tightly together over the abdomen, onto another bee.  While she presses against another bee, the scout bee activates her wing muscles and produces a sound resembling a Formula One car revving up at Le Mans. These piping scout bees are highly excited and run all over the swarm burrowing into it, and pausing frequently to pipe. At first, the beekeeper will hear sporadic weak piping sounds, but they will increase in intensity and build to a climax just before the swarm’s takeoff.

Some of the scout bees communicate imminent departure by shaking or vibrating the quiescent mantle bees. A shaker bee grasps her sister and shakes her body for one to two seconds at 16-18 Hz but this shaking signal is not as significant as another important signal, the buzz run.  This third signal really gets the bees going and, if observed in conjunction with piping bees, is a clear sign that the swarm will usually takeoff in the next one or two minutes.

Figure 3. Panel 1: The buzz-runner runs towards the quiet bees. Panel 2: One second later, the buzz-runner makes contact with the cluster, spreads her wings, and buzzes the other bees. Panel 3: One second after making contact, the buzz-runner continues pushing through the cluster, still buzzing her wings. Panel 4: Bee is still buzzing her wings as she runs off. Drawing by Barrett Klein, from Honeybee Democracy (Princeton University Press) and used with permission from the author.

The buzz runners are also the pipers and are most noticeable on the swarm cluster just prior to takeoff. You can see above in the diagram how the buzz runner runs towards the small group of torpid bees, and a second later she spreads her wings and buzzes them as she makes contact with the cluster. She pushes through them still buzzing her wings when contact is broken, and she may fly round before landing to repeat the procedure. She may sense the temperature of the bees whom she presses against, and research informs us that takeoff begins only a few seconds after 100% of the bees have their wing muscles warmed to 35oC. And they’re off!

So how does this knowledge benefit beekeeping? Acquiring a deeper understanding of this amazing behavior of the scout bees on a swarm enables the beekeeper to watch some of nature’s most wonderful displays as a partner in a unique relationship with bees.

Practically, the beekeeper can examine closely the swarm and work out how near to takeoff it is by looking for signals.  If no piping is heard and no buzz runners are seen, then there is time for assembling the necessary equipment, and to think carefully about the best action to take in a relaxed manner. How many times do beekeepers get so excited by swarms that they react rather than think things through quietly and carefully?

If, however, piping is heard, and maybe buzz running is also seen, then still all is not lost! The swarm can be lightly sprayed with cool water using a spray bottle.  This will lower the bees’ body temperatures and will stop their departure cold, at least temporarily. Now the beekeeper has an extra 10 minutes or so to capture the swarm and so keep the girls at home.

To see videos that show the sights and sounds of scout bees producing their piping signals and buzz runs, check out the following website:  https://www.youtube.com/watch?v=yJcoFUvTihc

Heinrich, B.  1981.  The mechanisms and energetics of honeybee swarm temperature regulation.  Journal of Experimental Biology 91:25-55.

By: Erik Osterlund   Dr Melissa Oddie, a Canadian researcher, will continue her research for at least two years based on the Varroa resistant bees…