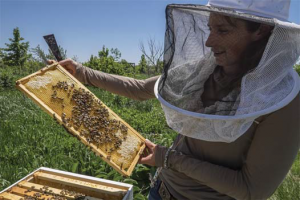 A few spring-like days means that beekeepers are peeking in their hives, hoping to find big clusters and heavy boxes. Inevitably, we’ll come across a hive that is cold, quiet, and still – a corpse. It always feels bad, even after decades of beekeeping. While it never gets emotionally easier to lose a colony, we can control how financially destructive it is. Last month I introduced three steps to making my operation more sustainable: 1) Accounting for (and being accountable for) my losses, 2) Making up replacement colonies from within my own apiary, and 3) Making my excess bees available to my local community. Last month I described step one. In this article, I’ll tackle the specifics of part two – how I make replacement colonies from within my own apiary.

In 2015 I was awarded a farmer rancher grant through the USDA Sustainable Agriculture Research Education (SARE) program (FNC15- 1005-” Improving apiary sustainability by using an overwintered nuc system for colony replacement and expansion instead of purchased package bees”). My goal was to find a method of colony replacement that doesn’t require high labor or cost, and doesn’t cut into honey production. With this grant, I looked at methods of splitting my colonies in the late season and overwintering nucs. While my original goal was to have a few colonies on hand to replace dead outs in the Spring and allow me to expand my operation without buying bees, I found that making small colonies in the late Summer had other advantages as well. First, it was a good system for stock improvement. By the end of the main honey flow, I already had a sense of what colonies I liked, and which ones were not ideal. I could replace the queens in colonies that were hot, unhygienic, or had disease issues. I would be removing the genetics I didn’t like every year, and increasing the number of hives with good queens. Over time, I am improving the overall quality of my bees; every year, I come out of the winter with young queens of ideal stock.

Secondly, the timing of this approach is incredibly useful for Varroa control. I can make a split with a queen cell, which provides a brood break in the late Summer. If I couple this with an oxalic acid dribble, these colonies would be nearly free from Varroa right before my precious Winter bees are made.

Late-season nuc making is now part of my yearly beekeeping plan. I have only been playing with it for about five years, so I’m still working out what system works best for me. Below I’ll explain what I have learned so far. You will need to work out the timing and the equipment to fit your climate and your needs.

The goal is to find a window where you won’t be sacrificing all of your honey production from your big colonies, yet the new queen can become established before you need your winter bees. For me, in southern Michigan, this target period is usually from Mid-July through August.

Many beekeepers think of nucs as colonies in five-frame boxes, but there isn’t a standard. A nuc is just a smaller colony; it can be in a 10-frame box, a three-frame box, etc. In the Winter of 2015/2016, I compared multiple equipment styles.

In year one of the SARE grant, I overwintered 86 colonies in five different styles of equipment: full size hives (n=8), single 10-frame deep boxes (n=15), double side-by-side deep boxes (n=12), four-frame towers (n=38), and Polystyrene five-frame nuc boxes (n=11). The nucs were started within two weeks from the end of July through the beginning of August, with most made the first week of August. They were made with five frames of bees, two to three brood frames and had queen cells from the same mother queen.

In year one, I had better survival in my nucs than my full hives with their old queens. The greatest survival was in the single deep hives (87%), followed closely by the Polystyrene nucs (82%). The double deeps, fourframe towers, and full sized hives had similar rates (67%, 68%, and 63%, respectively.) I felt that the equipment with lower survival was not because it was worse, but was because I wasn’t using it correctly – the differences were more of a function of using the wrong methods for that equipment rather than a fl aw in the equipment itself. In year two, and in the years since the SARE grant, I have worked to optimize each type of equipment to fi t into my operation. Some work well for replacement colonies, some provide support for queen rearing, and some provide nucs for sale. I found that a single story nuc (fiveframe Polystyrene nuc or single deep) was good for replacements, while the vertical colonies were good for small colonies that support nuc sales and queen rearing.

In the beginning of July, I make my replacement ‘packages’ using fiveframe polystyrene nuc boxes. From each large colony, I pull two frames of brood and a frame of food and put into a polystyrene nuc with a frame of foundation and a frame of drawn comb. The next day I add a queen cell. I’ll check the queens, and will restart those that don’t return from mating flights. I let the nucs build the rest of the season. In the spring, I just load them into the flat bed when I do my first inspections, and can put the bees right into full size equipment if I fi nd a dead-out. If I have extra, I can sell them as five-frame overwintered nucs.

There are other ways to make up your replacement colonies. Beekeepers who purchase a package, for example, could make a small nuc with the package queen, and either let the big colony raise a queen, or introduce a local queen. That way they have a new queen in their producing hive, and a back-up for every colony, just in case! You don’t have to use any specialized equipment for these options- the Polystyrene nucs are light and easy to move, which is why I use them, but the bees would be just fi ne in a single deep or two medium boxes.

If I extract at the end of July, I can break down my big colonies into multiple single story hives. After I pull honey, I go through each hive, and set up each box to have the equivalent of a nuc, with the old queen on the bottom level. When I’m ready to split, I leave the old queen in the original location, and take one or two splits, giving them queen cells/new queens and overwintering them each as a single deep box. I don’t have to do all my hives this way, (I may want to leave some if I think that I can make more honey from a later honey flow), but I found that I can usually overwinter two to three times the number of colonies. This gives me a huge buffer – if I had a bad year with over 50% loss, I won’t be that far behind in spring. If I make them up earlier, and I think there will be enough nectar, I can make them smaller. If it is later, then I’ll make them a little larger than a fi ve-frame nuc. Using 10-frame equipment rather than a five-frame nuc box allows for four big advantages:

Testing different methods of overwintered nucs for the SARE grant.

The two equipment styles that have vertical brood nests (fourframe towers and double deeps) don’t work as well for replacement colonies, because they are hard to transport, and hard to move bees in and out of. However, they are great for beekeepers who raise queens, or want to make nucs for sale. I initially started them in early July with two frames of brood and a frame of food and a queen cell. They built up to the second box by winter (in some I added honey frames). In the Spring, after they have built a little, I will sell a nuc with the over wintered queen in it, and put another queen cell in the hive (May). Once she is mated, I’ll sell another fi ve-frame nuc from that hive, and put in a second queen cell (June). This queen will then be used to build up for the Winter. When this system works, I can sell two nucs from each tower of bees. I also use the vertical systems to support other nucs, act as mating nucs for queen sales, and to provide brood for the queen rearing operation. I will basically keep these as a separate, nuc-based operation, but can use them for replacements if needed. 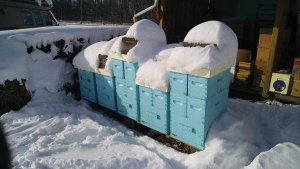 Like most of beekeeping, equipment choice for nucs has a lot more to do with management preference than it does biology. The choice of equipment is largely based on my end goal (nuc for sale or replacement colony that would go in full equipment), and timing (did I want to split a hive later, or make a new colony that would grow to fi ll its equipment?) The same is true for the choice of queen. You can use a cell, virgin, or mated queen for your nucs. Nucs made at the early end (July) get cells; they are much cheaper, and give me a break in the brood cycle. The downside is the inevitable loss of a few nucs to unsuccessful returns from mating, but those nucs may be easily recombined. Mated queens are utilized in later lateseason splits because I don’t want to interfere with the production of winter bees. Remember, a nuc is just a small colony with all essentials of brood, food, and bees. You can get these components by making a very small colony, and letting it grow, or breaking down existing colonies into ready-to-Winter splits. However you make them, you have to remember that they are small, and won’t produce a lot of food or a lot of bees. You may have to keep them in a more sheltered location, and really make sure they have enough food.