Nothing ever stays the same forever – or does it. I’ve been at this job for what seems like forever, in a good way. I love it here. And some have asked me “Don’t you get bored!” The answer is no. There’s never time to get bored – here or at home. That is a word that is almost never in my vocabulary. I think boredom – like joy – is a choice. There’s work, and the bees and the chickens and the ducks and the cats and the garden and the yard and the house and time with friends and church and kids. So we are never bored – we are often tired, but never bored.

Soon my life at Bee Culture will be changing. Kim has been talking about his retirement, so you all know it’s happening sometime soon. So soon I’ll have a new boss. We’re pretty close to being able to tell you who that will be, but still some details to work out. But in the next month or so we’ll be making that announcement. I’ll be here for awhile longer and Kim will be around on a part time basis working on some special projects. So life won’t change too drastically right away.

I’ve been blessed and kind of spoiled working here at the Root Company all of these years. It allowed me easy access to my boys when they were growing up. I could be there in five minutes if I had to – school or home. That was huge to us. And even after I moved to Spieth Road with Kim, we’re still only seven miles away – 15 minutes on a really bad day. Life has treated Kim and I very well here in Medina, Ohio.

We had to grab each of those ducks and clip their wings this past weekend. Kim and I were sitting on the deck one late afternoon and watched as a male and a female flew right by. They looked beautiful as they headed for the neighbor’s yard. The funny thing is then they panicked and ran back to the pen, where all of their friends are. The male especially had been flying quite a bit, so it was time.

Our poultry population sometimes seems out of control. We are at 28 birds right now – 14 hens of various ages ranging from almost eight years old to two years old, then seven young hens born in April and the seven ducks born in April. All are doing well as we wind down the Summer. We have one older hen that gets out almost everyday, often meeting us in the driveway when we get home. Then she’ll wander over to the pen and just wait by the gate until you come and open it and she just sort of strolls in. She has spent a couple of nights outside though, when she didn’t make it home in time. Who knows where she goes. Update on our little cripple girl. She’s doing just fine. Her limp is hardly noticeable now and she gets right in the thick of any scuffles that go on. She’s still a bit smaller than the others and doesn’t really have a comb or a wattle. She probably won’t be an egg layer, but that’s okay. We’ll let her stay. It’s what we do.

There’s a field across the road from us that a guy comes a couple of times a year and cuts hay. Last weekend was his time to come. After he got all done we watched at least nine vultures sweep that field. From a distance I thought they were wild turkeys, which have come back to our neighborhood, but then realized it was vultures. I’d never seen that many in one spot before. It was a little scary. And it was mayhem in the hay field for all the mangled little creatures they were feeding on.

I got Kim a drone (the mechanical kind) for his birthday and he wanted to go over to that field to practice. It was amazing the amount of small dead things we saw. So the vultures chose a good spot. The drone, well, we still need some practice on that. 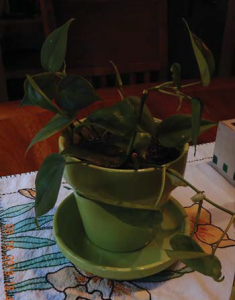 On our recent trip to Wisconsin for the Flottum Family reunion we took about a dozen philodendron cuttings in the back of the car. They came from a plant that Kim has nurtured for about 40 years. It was a plant that he gave to his mother and she has been gone for many years. He gave one to each of his siblings and the several nieces and nephews that were at the reunion. I never got to know Edna Mae, but I’m positive that this would have made her smile.

I just realized that with this October issue I’m starting my 30th year of layout and design for Bee Culture magazine. Not bad for someone who walked in barely knowing how to turn on the computer. Life is a journey and you just never know where you’ll end up.

Kim and I are headed to Montreal this weekend for Apimondia 2019. I hope to see some of you there. I’m excited about this trip. I’ve never been to Montreal. We’ll make a full report in the November issue. Then Kim has some other short trips lined up for the Fall to Connecticut, Mississippi and Lousiana. Pretty full schedule for someone who is supposed to be slowing down.

Our October event is coming soon. You can still sign up. A Fall trip to Northeast Ohio would be a wonderful thing. It’s beautiful here that time of year.

Hope to see you somewhere along our travels. Whatever your particular Fall looks like, enjoy.