When Canadian David Dubois bought himself six hives of bees and installed them in a northern Ontario city he forgot for a moment about one thing – bears. 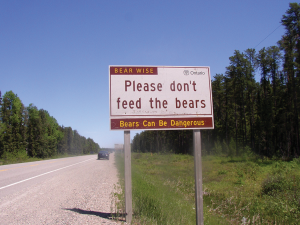 Dubois of Sudbury, 250 miles north of Toronto, researched his beekeeping project for four years, but obviously didn’t include bigger critters in his planning.

He received his C$4,000 (£2,335) worth of bees and equipment one day and by the next all six hives had been torn apart by a bear that dropped into town for a meal.

“He destroyed every one,” Dubois told the Canadian Broadcasting Corp. “He opened every one. I’m pretty despondent, but it’s not so much the money, as I was looking forward to the experience.”

Dubois had ordered an electric fence – standard equipment for beekeepers in Canada’s Great White North – but it wasn’t due for a week. He figured no bear would be desperate enough to root out the little bit of nutrition in his new hives.

A little bit of research shows how wrong.

Further south, the much more densely populated 715-square-mile Niagara region’s population of 431,346 didn’t deter the bears in their quest for the sweet stuff. The major winemaking region bounded by the Niagara River – also the border with the United States – Lake Ontario and Lake Erie, lost 61 colonies and 64 hives and equipment worth C$15,100 (US$11,641).

Dubois had an explanation for his losses way to the north and it has nothing to do with the countless squadrons of black flies doing escort duty for waves of mosquitoes.

“I’m angry more at the aerial spraying that has made bears not be able to have any food in the bush,” he says. “And they have to forego all their natural instincts and resort to coming in to an urban environment to feed themselves.”

The comment had Internet trolls firing stinging remarks in his direction.

“He left a known bear treat in an area where there are bears,” wrote one. “He knew the chance of bear engagement was high enough to warrant purchasing an electric fence. And then when his unprotected hives get hit by a bear, he blames people who are doing spraying?”

Others wrote that he should do his research before opening his mouth. 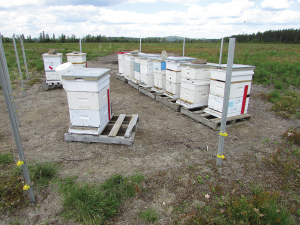 Another asserted there is no aerial spraying “in the bush” other than when fires are being extinguished.

“The bears are in an urban environment because there is plenty of food here and it is too early for a lot of food in the bush. If there wasn’t anything to eat, they wouldn’t be here.

Another wrote: “The easiest source of food at this time of year is into the city, where all of the garbage-throwing, beehive-keeping people live. Bears aren’t stupid.”

In fact, research has found them to be one of the more intelligent mammals.

There are an estimated 100,000 black bears in Ontario.

The provincial Ministry of Natural Resources and Forestry says the bears’ entire life revolves around food. When they are not hibernating, they spend their time looking for food. 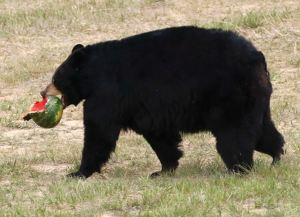 From the time they come out of hibernation until berry crops are available, bears live off their stored fat and the limited energy provided by fresh spring greens. They get most of their food energy by feeding on summer berry crops such as blueberries, raspberries, and cherries. In the fall, they turn their attention to hazel nuts, mountain ash, acorns and beech nuts.

So many fun-loving bears have visited Sudbury, a city of 165,000 people – 66 at last count – the Greater Sudbury Police created a triage system to handle bear reports.

Inspector John Somerset says the new approach takes 911 callers through a series of steps to determine whether the situation is dangerous or not. He says a trapped or injured bear, or a bear acting aggressively are considered a higher risk than a bear rummaging through a garbage can.

Critical situations include when a bear enters a school yard, tries to enter a house, attacks a pet, or stalks people.

Once the 911 call has been triaged, a dispatcher then determines the resources directed to the call.

“People need to see what’s attracting bears to their areas and manage the attractants,” he says.

Bears usually avoid humans, but are lured into urban and rural areas by the promise of food. They will topple bird feeders, ransack barbecues, raid garbage cans and even try to enter buildings. If they learn that they can find food where people live, they will continually return.

In Timmins, a further 185 miles north, police last year warned against discharging firearms within city limits by city residents seeking to bag bears in their backyards.

The politically oriented online Northern Bear Report has been created to build a database of documented bear encounters – and to embarrass the provincial government into action.

“Bears have been regularly observed walking down streets in the middle of the day, posing an immediate hazard to public safety,” it says.

“It is not reasonable that people living in built-up areas should be experiencing this degree of risk on a regular basis. The constant exposure of residents to roaming bears should not be happening in our province; unfortunately, this has become the norm in many Northern communities.”

The North American Bear Centre, however, says the 750,000 black bears in North America kill less than one person a year on average.

Timmins resident Angie Corson, a professional biologist, says the situation where so many black bears are entering built-up areas of the city is a real problem. Many people have changed their behaviour and there is a genuine sense of fear, she tells the local newspaper.

Corson says her support of the provincial Bear Beware program includes distributing free whistles to hikers, children, berry pickers or anyone else who fears an encounter with a bear.

She says the whistles are an effective deterrent.

“A bear whistle makes the bear aware that you are there,” she says. “People can be a lot quieter than you think. It also alerts the bear that he needs to move on.”

“If you see a bear, you blow that whistle, and he will run. Nine times out of ten, he will run. Very rarely do they stick around. They really don’t want to be around people.”

Timmins, a grim little city of 43,000, has posted signs on all highway approaches telling people not to feed the bears.

But 205 miles to the southwest, Algoma Highlands Wild Blueberry Farm and Winery owner Trevor Laing shares his farm outside the tiny town of Wawa with as many as 50 bears and doesn’t have a problem with them.

He says when his farmed wild blueberries are ripe for the eating there are also plenty available growing in the nearby forest.

“The bears also don’t go too far into the blueberry fields because they don’t want to get too far from the safety of the forest,” he says.

Laing leases beehives to pollinate his crops, but there is a big difference between him and would-be beekeeper David Dubois.

Laing has his hives guarded by a sturdy electric fence.

Alan Harman is a freelance writer and frequent contributor to these pages. He lives in Brighton, MI.