The 21st century arrived at Spieth Road, again, in mid-April this year with the arrival of 7, 3 pound packages of honey bees in the cages you see below. They are the relatively new Bee Buss plastic cages that are slowly beginning to replace the wood and screen cages that have been around since A. I. Root invented them more than 100 years ago.

Those first cages were so well designed that they’ve changed very, very little since they first left Medina all those years ago. The first ones were square, and the feeder was a canning type jar with a lid with holes. Not a lot different than today’s version.

The Bee Buss cages, being new, are not completely understood by everybody. Including me. Especially me. I watched the YouTube video on how to use them and it seemed pretty straight forward, and some of the features seemed to improve the design overall. But when it came to me using them, there were some glitches, probably all due to me not understanding the process as well as I should have. 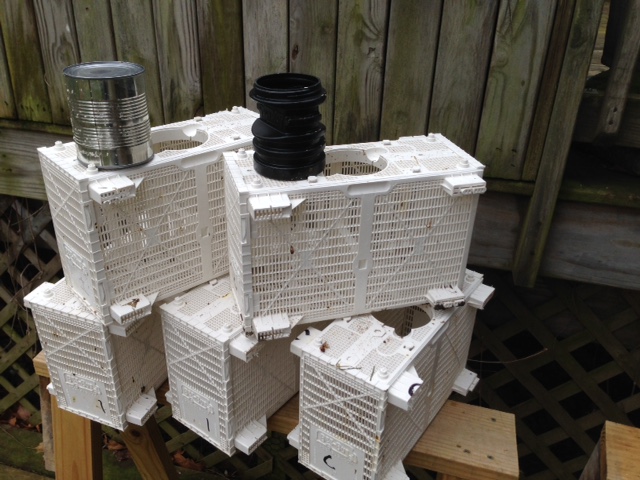 For instance, if you have more than one and they are clipped together on the corners, how do you get them apart? I know, I know, you simply….do something with a twist and turn and they just fall apart, right? The turning and twisting didn’t work for me however, so me and my friend Buzz, who was helping, simply sawed them apart. Dumb, right? Well, it worked. But of course you won’t be able to hook up the cages anymore.

What else? Well, there wasn’t a flap or cover over the feeder can. The top is a plastic gird like the sides and bottom for good ventilation but when you sprayed the bees inside with sugar syrup from the outside, that syrup spread all over the top of the can…well, some feeders were metal cans, and some were plastic cans, with ridges. See the photo. The plastic can was rather pliable, which was good because you could argue with it a bit when you had to take it out to remove the queen cage which was snugged in a junction of two pieces of the plastic grid that made up the top. And some of those cages were snugged way, way away in that crack, while some were close to the edge. Those that were too far actually went around a corner and you really had to mess with the cage to get it out, while the bees weren’t especially happy about the activity. Mostly, you just tore off the metal strip that it was hanging by to get it out. That was OK since the strip isn’t long enough to hang from a frame top anyway so you drive in a couple of nails to hang it between frames like Buzz does, or you use a rubber band, like I do, or you squish the cage into existing comb, if there is some to hold it in place. One more thing. The plastic feeders were filled with a jellied sugar…something. I imagine it was similar to the jellied something that they used when shipping bees from, Oz or New Zealand, I forget, a few years ago in a package like cage too. Because these were being sent in a plane liquid syrup didn’t work so they jellied it so that when the pressure dropped at high altitudes the syrup, now no longer syrup, wouldn’t run out of the feeders. Clever, I think. These were all half full and I don’t know if they bees all ate half, or the cans were only filled half way . But I imagine it’s been tested by now to the point that those making it up know how to make is so the bees get enough and can use it.

There are threads on the top, or rather the bottom of the plastic cans so some sort of lid could be attached, but these had nothing because the gel was solid and wouldn’t fall out. The cages with the metal cans use liquid syrup, and they were all mostly empty. Dry. Gone. Nada. That was disappointing. And the bees were, shall we say, anticipating some food or they were going to kill you hungry.

Then, somebody told me the end was supposed to pop off and you could just pour the bees out the end instead of bouncing them around the inside of the cage to get them out of the hole on top. Easy, they said. Well, I did something wrong because it wasn’t easy at all. In fact, it didn’t happen at all.

So what we did was, lift the can up, remove the queen, put the can back, thump the bees down, remove the can, pour the bees into the waiting hole made by removing frames in the hive. Back and forth, sideways, upside down, roll them around, shake some more, slide them out…you know the story. Just like the wood and screen cage in days now gone. I’ll have to figure out that end thing next time.

But don’t get me wrong, there’s lots of good things to go with this cage. The plastic is thick enough that the bees can’t sting through it so you can hold it anyway you want when you’re carrying it or shaking bees out. That’s a plus for sure – think of your local Postal officials, family members or the folks who have to handle thousands of these. And it’s durable. After we finished we tried to break one. Dropping it flat, on a corner, I even stood on it. Nope, this is one tough cage, and I’m pretty sure anybody that handles them will be glad of that fact. The gel in the plastic cans eliminates spilled syrup and clogged holes which will make everybody happy, as long as the bees can use it.

The videos show that assembling them is a snap, well, a snap compared to the old style, so even though the materials cost more, the makers save even more in labor so they actually come out ahead in cost. Interestingly, nobody wanted them back. No deposit. No return. Maybe that isn’t what everybody does, but that’s what I was told. Or maybe I just bought the cage along with the bees.

Here’s the bottom line. For those who use these things by the thousands – assembling, filling, making syrup, inserting queens, snapping together and loading on a truck, these are definitely a lot better than the wood, screen and tin can cages we’ve used for almost ever. But they aren’t foolproof, and for someone who’s never done a package before they can be a bit mystifying. And for an old fogey like me they are a lot mystifying. And construction isn’t perfect yet. That plastic can needs some work, and the ease of removing the end needs more explanation. These cages, just like the old ones are definitely made for the producer, not the end user.

My trials will soon be forgotten, even laughed at by the third time I use these I suppose. But in mid-April this year the 21st century came to Spieth Road, made itself to home and said hello, Kim. Now get used to it.
Kim Flottum