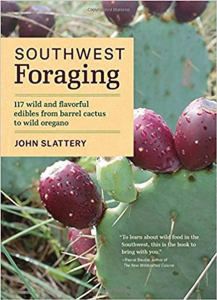 The title covers Arizona, New Mexico, Oklahoma, Texas, and parts of Nevada and Utah. Featuring over 75 pollinator plant species, it contains a wealth of useful information for beekeepers.

This region contains many diverse habitats, which are described and discussed in detail in the introduction. That is followed by a very impressive seasonal foraging guide with page after page listing the plants by habitat for the individual seasons – even Winter. In addition, a foraging guide listing the plant part/parts consumed is included as well.

For novice foragers, the introduction to foraging is very helpful for it gives many clues to use in identifying plants. There is also a reader friendly glossary of botanical terms used in describing plants. Like the other volumes in the series, this one emphasizes sustainability issues.

The title also contains information on the equipment a forager will need. The author stresses safety issues, such as being certain about a plant’s ID and potential food sensitivities. Readers will also find details on preserving and storing foraged foods. In addition, this also encourages readers to grow the native edibles.

This easy to use A-Z guide has the plants arranged alphabetically by common name. Each in-depth plant profile gives the Latin and common names, where to find the plant and which part to harvest, plant ID tips, when and how to gather, and suggested uses for each plant.

In previous articles I’ve profiled over forty of these pollinator plants or their relatives with one of those being pyracantha. I had no idea that pyracantha berries were edible although the seeds are considered toxic.

Some of the other plants of interest to beekeepers are edible ones that yield honeydew, which include cocklebur, elm, junipers, and walnuts. Those edible species providing nectar are elm, mulberry and wolfberry. Pollen comes from cocklebur, elm, ephedra, hackberries, mallow, pigweed, plantain, snakeweed, strawberry, and walnut.

Of the many excellent pollinator plants featured in this title, I’ve chosen several to profile below in greater detail since they’re outstanding bee plants. 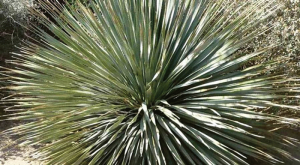 Members of the agave family, these easy to grow, evergreen perennials with a woody stem have a shrubby or tree-like appearance. With hardiness varying by species, they generally occur in the mountains and deserts of the Southwest. There are about 20 species, most of which are found in Mexico.

The plants vary slightly in height by species, and are typically up to six feet across. When sotols are young, they can resemble an agave. As the plant matures, it develops a terminal crown of long, very slender, stiff, crowded leaves with shaggy, spiny edges. Up to three feet in length, the stemless foliage looks much like that of the yuccas.

Although sotols can bloom any time from Spring through the Summer, they’re most floriferous during the latter. The small, bell-like, crowded, creamy white blooms emerge on tall, branched stems that can reach six to 20 feet in height, depending on the species. The male and female blossoms open on separate plants. These form large panicles or tight clusters with the flowers being most numerous on the upper part of the flower stalk.

The edges of the flowers can be toothed.  When mature, the fruits become dry but don’t split.

The following species are recommended for bee gardens.

Hardy to zone seven, this species is native to New Mexico, Arizona, and Texas.  Desert spoon grows to about three to five feet in height. The flowering spike can be nine to 15 feet tall.

The foliage forms a six-foot-wide, ball shaped crown. As the plant ages, the dead foliage clings to the trunk in a mass.

The stiff, sword-like, very spiny, grayish-green leaves are very slender. Three feet in length, these are spoon-shaped at the base.  Brush-like fibers are borne along the tips of the foliage.

This species is sometimes called bear grass. Hardy in zones five through 10, it is native to Texas. Only about three feet of the trunk are above-ground with the rest being covered by soil.

The rounded tufts of foliage grow straight up and arch outwards. Two feet long, the linear, shiny, green leaves are only ½ inch wide. The brownish-green spines along the edges are hooked in both directions.

The flower spike rises nine to 15 feet in height. The flower bracts can be much larger than the flowers. The fruit is only ¼ inch long.

This species can be grown from seeds, which sprout in about two to four weeks. Texas sotol is more tolerant of colder, wetter soils than the other species.

Grown from seed, these prefer the same growing conditions as the agaves and yuccas. The soil must be well drained. Rocky, sandy, and light, gritty soils are ideal. Wet, slushy sites during winter can be deadly for most sotols. The sun loving plants can survive light frost provided the soil is dry.

The seeds germinate in one to three weeks, depending on the species. No watering is needed once sotols become established.

Yielding yellow pollen along with lots of nectar, sotols are particularly good honey plants. They have been known to bring large honey crops. Up to a full super is possible although this doesn’t happen reliably every year. 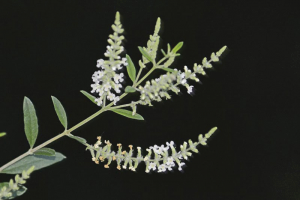 Known also as bee bush, these nectar and pollen species are members of the verbena family. Native to North and South America, they can be perennials or shrubs. Most are generally tender. All species bear very fragrant leaves. The tubular, richly scented blossoms form spikes.

Sometimes called Mexican heliotrope, this is native to Texas, New Mexico, and Arizona. Forming thickets, it occurs in semi-desert areas on rocky slopes. Several varieties of this species can be found.

Although this gray-barked, 10-foot-tall, wispy shrub can withstand drought, it dies back during dry spells. The tips of the branches can be sharp. Forming clusters, the inch-long, narrow, opposite foliage is greenish-gray.

Sometimes grown as a hedge plant, white brush is named for the minute, purple-tinged white blossoms. These appear in axillary clusters, three inches long, from June through December, depending on the weather. Flowering can continue repeatedly during the year for a short period after each good rain. It has been known to bloom seven times during rainy years.

The nectar flow can be quite heavy after each rain with a moderate honey crop resulting each time. Five or so pounds per day can be added to hives during the blooming period. In good years, this supplies a very large honey surplus.

The good quality, profound white to light amber, mild flavored honey has a light aroma and a heavy body. This tends to granulate rather quickly.

Also known as oreganillo and Mexican oregano, this deciduous desert native is found in California, Nevada, Utah, and Texas. Among its habitats are mountains, hillsides, canyons, arroyos, dry rocky slopes, and ravines. The plant is drought and heat tolerant.

The leaves are hairy underneath. Wright’s bee brush leafs out quickly after each rain and dies back during dry weather.

This very free flowering plant blooms from Spring though the Fall. Opening on the current year’s growth at right angles to the stem, the very small, white, axillary flowers are exquisitely fragrant. These appear on slender, three-inch-long spikes. The small drupes containing two nutlets are eaten by birds.

Sometimes cultivated, the various species are suitable for hedges, herb gardens, and naturalistic plantings. These sun and heat loving plants are generally grown from cuttings. Suitable for coastal areas, they require a well drained soil. A light textured, loamy soil is preferred.

The plants are tolerant of very light frost and drought. However, they’re much more floriferous if they’re watered during dry periods. Should the plant become scraggly, prune to encourage new growth. 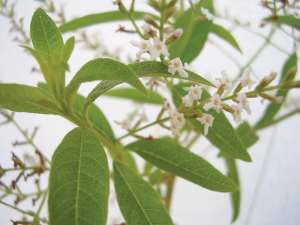 White brush has a close relative (Aloysia triphylla) that has spread from cultivation and naturalized in a few states. These include California, Georgia, and North Carolina. This is a popular choice for herb gardens.

This shrub can be semi-evergreen to deciduous, depending on the climate. It is native to tropical South America.

Hardy to zone eight, lemon verbena reaches six to 10 feet in height. The lemony aroma is more pronounced when the foliage is crushed.

Two to three inches long, the glossy, crinkled leaves are light to medium green. Borne in whorls containing three or four leaves, the foliage is narrow to almost lance-like.

The tiny, white to pale lavender blossoms appear from Summer through the Fall on the current year’s growth. These emerge in clusters on the flower spike.

Lemon verbena prefers a well drained spot in full sun. This is propagated from cuttings and seed. Prune as needed to keep this plant bushy.

Like its relatives, lemon verbena is a great honey plant. This species is a major source of surplus honey in South America. 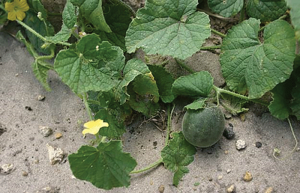 A member of the cucurbit family, this is sometimes called speckled gourd, creeping cucumber, and Guadeloupe cucumber. Several varieties occur in different areas of the country. The range of this species extends from Pennsylvania, Illinois, Indiana, Kentucky, and Tennessee throughout the Atlantic region, the Southeast and Gulf region westward to Oklahoma, Kansas, and Texas.

Depending on the climate, meloncita can be an annual or perennial. In warm regions, it is the latter. Hardy to zone eight, the climbing, slender, smooth vine is three to six feet in length. The plant bears simple, unbranched tendrils from the sides of the leaves.

Like the other cucurbits, this vine bears both male and female blooms. The females are solitary.  Flowering is from June until frost in colder regions and year-round elsewhere.

These fruits are best eaten green for ripe ones can have a strong purgative effect. Meloncitas are typically served raw or pickled. Both the taste and aroma are cucumber-like.

Easy to grow from seeds and cuttings, meloncita can be grown like any other vine crop. Suitable for trellises, they thrive in full sun and part shade. The plants self-sow.

Seeds sprout in five to ten days. In cold climates, start these early indoors and transplant after the danger of frost has past.  Meloncita adapts to a range of pH levels from acidic to neutral.

Like most other cucurbits, meloncitas are good bee plants and yield nectar and pollen. The flowers are an aid to brood rearing. These aren’t known to yield much surplus honey mainly because they generally aren’t plentiful enough.