There is much confusion and misunderstanding among beekeepers as to which Varroa treatment chemicals to use and when.

Most Varroa treatments have an average low temperature efficiency anywhere from 50 to 65°F. Oxalic Acid drizzle can be used in the Winter months at temperatures of approximately 35°F to 55°F range when little to no brood is present and the bees are clustered. Oxalic Acid is also only effective on phoretic mites. Apivar has no minimum temperature but loses effectiveness when bees cluster and the Apivar strips are not contacting the bees. HopGuard® II is a contact application and its efficacy increases in the Spring and Fall when there is less brood present in the colony. In the Fall, it can be used as a quick mite knock down and incorporated into a mite treatment rotation schedule. Most of the Varroa treatments are more effective at low or diminishing brood levels. For instance, Apiguard (thymol) is recommended to be used right after the nectar flow when the queen is tapering off her egg laying.  In South Carolina and much of the Southeast, this is in the May/June time frame.

The NOAA US government web site was consulted for average high and average low temperatures in several southeastern areas/cities (http://www.ncdc.noaa.gov/cdo-web/datatools/normals) This NOAA data was integrated into the Varroa high and low temperature efficiencies to generate a table and graph showing the effectiveness of various Varroa chemicals during different times of year in various locations in the Southeastern United States. One can use graph closest to one’s location area to determine what Varroa treatment should be most effective during a particular time of year. 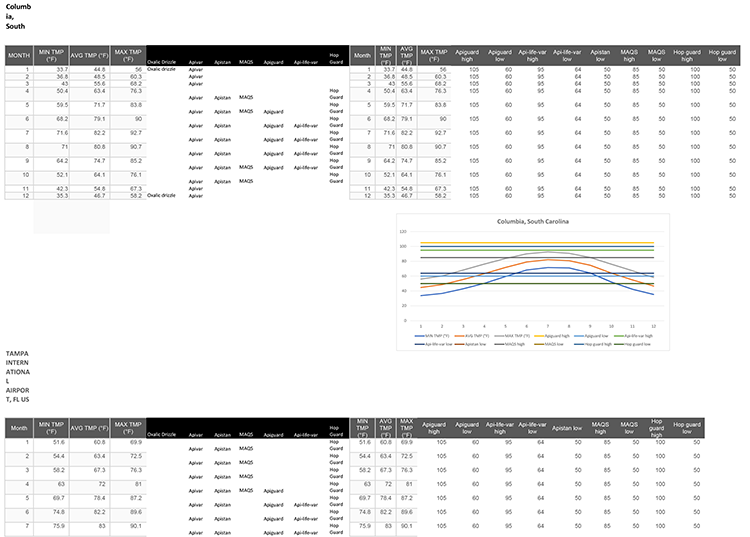 Hop Guard II: Active Chemical – potassium salts of hop beta acids. Application – one strip per five brood frames; max two strips per brood chamber; leave in for 30 days.   applied up to three times during the year. Cardboard strips; use no more than three times a year Hop Guard® II is most effective in early Spring and late Fall when there is less brood present in the colonies. Studies have shown that Hop Guard® II is safe to use during honey flow without any risk of disrupting nectar foraging or tainting the honey. During warmer months, entrance should be fully opened and inner cover removed.

Check Mite +: Active Chemical – Coumaphos. Application – max two times a year for Varroa; one strip per five brood frames; near center of brood cluster as possible; leave in for 42 days/six weeks no more than 45 days.

Apiguard: Active Chemical – Thymol 1.76 oz (50g) per tray. Application – Combine weak colonies before treatment; efficacy maximized if used after honey harvest when brood is diminishing; can be used in Spring if necessary but this is not recommended. Do not treat during honey flow.  Remove honey supers before applying treatment; after two weeks replace first tray with new one.  Dose higher that 1.76 oz. (50g) per application can cause agitation, absconding, increased mortality.

Apivar: Active Chemical – Amitraz. Application – remove all honey supers before application. One strip per five frames bees. Leave strips inside hive for 42 days, remove after a maximum of 56 days. Do not reuse strips. Use in Spring and/or Fall. Remove Apivar strips two weeks before honey flow starts. Do not use Apivar strips when honey supers present. Hang between two combs; minimum distance is two frames between strips. Bees must be able to walk on both sides of strips. Do not use more than twice a year.

Oxalic Acid: Active Chemical – 97% Oxalic Acid Dihydrate. Application – use only in late Fall or early Spring when no brood present. Will not control Varroa mites in capped brood. For outdoor use only. Do not use when honey super present. Solution method:  35 g Oxalic to 1 liter 1:1 sugar syrup. Apply 5 ml solution directly onto bees in each bee space between frames in each brood box; 50 ml max per colony. Vaporizer: apply to outdoor colonies sealed, 1.0 g per brood chamber into vaporizer.

Apistan: Active Chemical – Tau-fluvalinate. After treatment, do not use beeswax for human treatment. One strip per five frames in each brood chamber. Hang strips within two combs of edge of bee cluster. Do not use when honey supers present strips must be in contact with brood nest bees at all times. Two deep brood chambers, hang strips in alternate corners of cluster in the top and bottom super.

Api-life-var: Active Chemical – Thymol 74.08%; Eucalyptus 16%; L-Menthol 3.7% Application – do not use when honey supers  present.  The recommended dosage is three tablets per colony (need 1.5 sachets for a full treatment). Two treatments per year can be made.