It is a beautiful Spring day and time to open your hives to see what is needed. Uh oh! One colony is dead! You noticed that all the other hives had active flight except this one. You gave it a good thump on the side and did not hear an answering buzz. At this point you could just sit down and cry – but wouldn’t it be better to find out why? Certainly! You could try to learn what happened so you might be able to prevent such a problem in the future.

No, this scene just won’t work. Neither will a call to the CSI investigators. Yes, on TV CSI does have a fancy laboratory that seems to do impossible tests to solve difficult crimes. I don’t think CSI would be helpful.

So let’s step back in time to Sherlock Holmes and see if Sherlock Holmes can help. Holmes was always shouting ‘Give me the FACTS!’ So that is just what you are going to do. Find the facts and examine the facts that this dead colony presents. 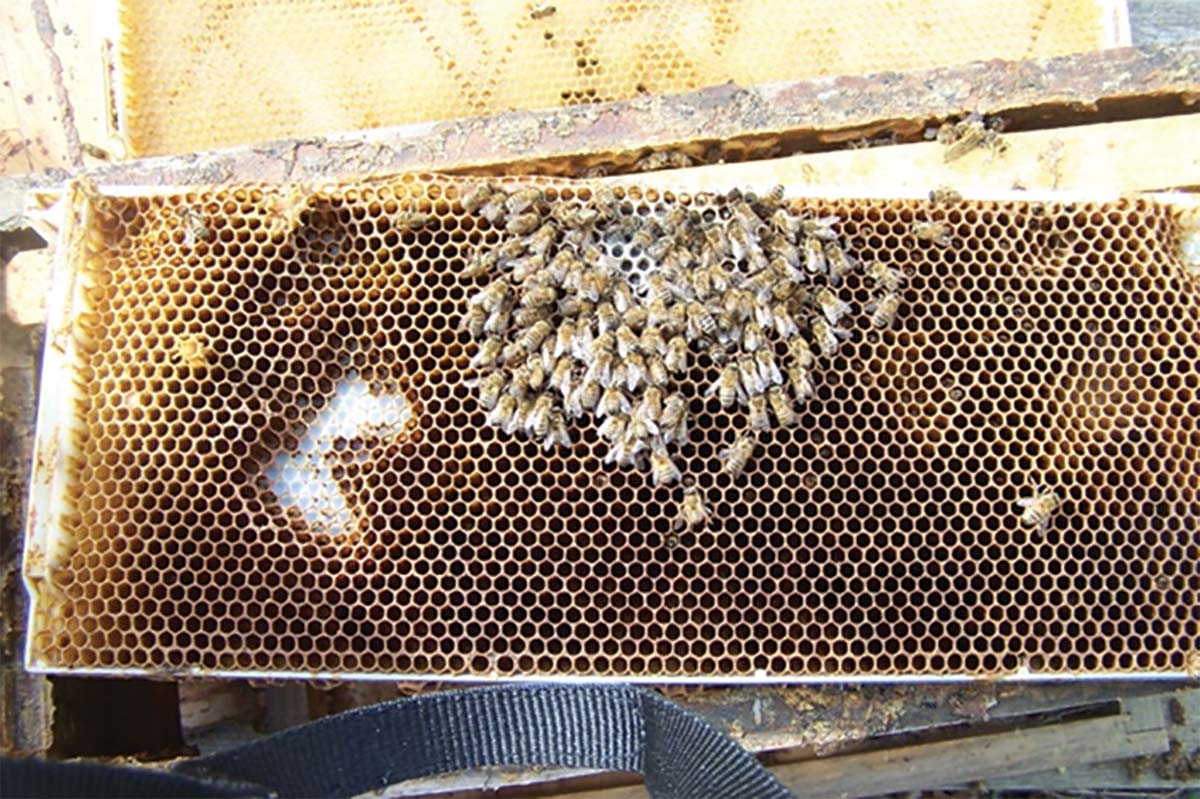 What can a handful of dead bees tell you? Lots, it seems.

With any crime scene the sooner the scene is scoured for evidence the easier the crime is to solve. No, your dead colony is not a crime scene but the sooner you can examine the hive and the dead bees the easier the reason is to determine. So let us begin on the hive ‘necropsy.’ By the way, on humans it is an autopsy. On animals (the bee is an animal) it is a necropsy. (Yes, I know, the hive itself isn’t alive but you may be examining dead bees.)

Think back – and look at your records (you do keep some sort of records?) – when was the last time you saw that this colony was alive? No matter what climate you live in, you need to check at least once a month. In the warm areas of the U.S. bees can remain quite active 12 months of the year. In temperate and even in the very cold areas you do need to check on them once a month. Although there is not much you can do if a colony is dead in the cold Winter months, you can mark it to be examined as soon as possible.

In addition it is a good idea to block the hive entrance to prevent robbing. If the colony died from disease such as American foulbrood, robbing on a warmish day could spread that to other colonies. If it died from other reasons, you want to preserve the hive contents as best you can to examine later. Do not wrap it in a plastic trash bag. The colony and other hive contents will ‘steam cook’ on a sunny day and destroy evidence. Just block the entrance with a piece of window screen or the solid part of an entrance reducer or bricks.

It’s time to check records again. Is this the colony that seemed weak back in early September? Is this the wimpy colony that you thought you could bring through the Winter if you just fed it plenty of syrup and gave it a nice pollen patty? Wimpy colonies in early Autumn are wimpy for a reason and food just might not be the reason. If the queen is not laying enough eggs to make a good Winter cluster, the colony will simply perish.

I hope that you have checked all around the hive itself to make certain it is intact, upright and looking quite normal. Colonies have survived bad Winter weather with tops blown off or storm-damaged tree limbs resting on top. All seems normal? Good. Now remove the top cover and examine the underside of it. If it is dry that is a good sign. If it is wet and appears to have been wet for a time, make sure the metal cover has no holes where rain or melting snow could enter. Bees can withstand dry cold, but they cannot cope with wet and cold. Since it is new equipment all is well. Set the top cover aside.

Now Sherlock will want to know if you provided top ventilation for the hive. Moisture produced by the bees eating honey rises in the hive and must escape. If the top cover was raised in front by a bee space, then the hive should be dry. If no ventilation was provided evidence of too much moisture may be seen during your examination. Moisture that rises with no escape will condense on the underside of the inner and outer covers. Then that moisture may freeze on a cold day only to melt on a warmer sunny day and literally rain down on the bees.

At this point Sherlock’s good friend Watson is going to ask a question. Is there a hive top feeder or a pail feeder or an entrance feeder with syrup on the hive? In temperate and cold climates the bees cannot process syrup during Winter months since water must be removed from syrup. During the Winter in those climates the bees depend on honey or syrup they have stored in cells in comb above and to the sides of the cluster area. During warm Autumn days the bees would be able to evaporate water from syrup to be stored as ‘honey’ with low moisture content.

The next part of the hive to be removed and inspected is the inner cover. If it is dry, set it aside. Now what is next? It should be the top brood chamber. If it is, then you will be removing frames for examination. Suppose, however, you had thought about collecting some honey from your hive and the top box is really a honey super with a queen excluder underneath? At this point you may be close to the reason the colony died.

Since the queen cannot pass through the excluder the colony ate its way up into the honey super. The queen, left behind, died from neglect and cold. No replacement bees were born during January and February so the colony withered away. Next time be certain a queen excluder is not forgotten.

But you were lucky. The box under the inner cover is indeed the top brood chamber. You need to remove frames, one by one, to see if there are any dead bees and if there is stored honey. You find no bees and all frames full of capped honey or stored sugar syrup. So the colony went into the winter with good stores, enough to last until early nectar sources appear. Everything you examine is dry, not showing signs of moisture. And, so far, no bad smells.

If you find no disease in this hive the food stores in this box can be given to your other colonies to use. Scratching the cappings will encourage your other colonies to clean up the comb. However if you will be buying or making a nuc or buying a package this box can be used to provide a source of food for a good start. Remove this brood chamber and set it aside. You should cover it so robbing does not start. Remember – you still do not know if disease is present.

Now you will examine the next brood chamber. Your hive consisted of three medium depth boxes so you would not have to lift the heavier deep ones. Since the first box you examined was dry the colony does not exhibit moisture problems. The first two frames you remove, from one side, contain some honey. But the next one has a patch of empty cells. You are now beginning to enter an area that might have some clues. Before you go any further, do you see anything not normal? No. On to the next frame. Many empty cells and one dead bee hanging on by a leg. No bad smells. And no dead bees stuffed headfirst into empty cells.

If you had seen a patch of dead bees headfirst in cells one conclusion would have been that this colony died of starvation. The cluster simply could not move upward to the stores. If you are a good Weather Watcher you might remember a spell of unusually cold weather that came suddenly causing the cluster to remain in place. But the facts you found do not support this idea.

As you progress through the frames in this brood chamber, you might note that the empty cluster area seems small. This was not a wimpy colony back in Autumn. But as the colony moved up from the bottom brood chamber it could have occupied a larger area. Remember the cluster is shaped like a sphere even though it is formed with comb running through it. Sometimes it is hard to visualize that sphere as you are removing frames.

Since this brood chamber does not provide much information except lack of bees and no diseased brood area – in fact no capped brood – set this hive body aside but cover it also, just to be safe.

Now the bottom brood chamber will undergo the same frame-by-frame inspection. Each frame is empty of food stores and bees except for an occasional dead one that falls off as you handle the frame. You see no signs of disease, no bad smells. So you can use that hive body with stored honey and the frames with drawn comb.

Now you have arrived at the screen bottom board. It is a mess. You see tiny bits of wax the bees dropped while uncapping honey stores. There are some small clumps of dead bees here and there. Go ahead and poke around in them. WAIT! Is that a spot of bright color in that tangle of dead bees? Oh! It is the queen! Dead! Her year color dot gave her away. You were lucky that bees had not removed her before they died.

Now you have an answer: the queen died. The colony simply dwindled away with normal death and no eggs being laid to replace that normal death. She looks fine so what happened? Well, sometimes queens just do that, even if young.

At this point you may wonder if there was something you did? No. Was there something you could have done to save the situation? No. You have no idea exactly when she died and, being winter with cold weather, colonies are best left alone.

So what does Sherlock have to say?

Ann Harman discovers the mysteries of the beehives from her home in Flint Hill, Virginia.

By: Nicola Bradbear Hundreds of supporters of Bees for Development gathered to celebrate bees and the work of the Charity in the gardens of…