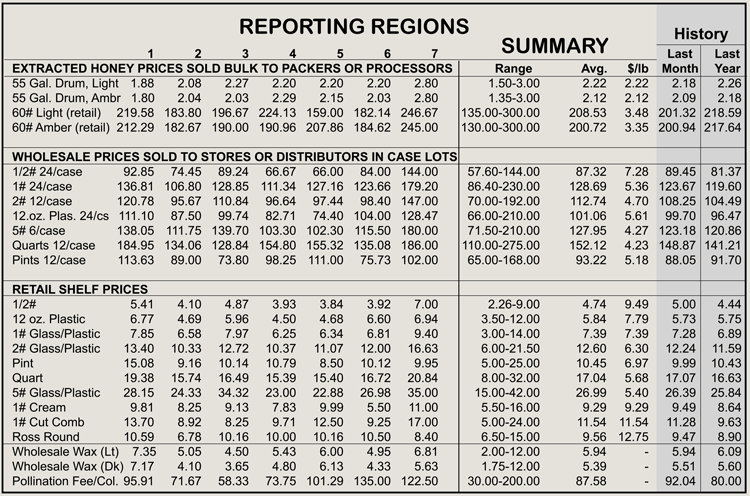 Bee Culture’s field reporters this month have been busy, and we’ve been collecting data to give you a picture of what our reporters have gone through since just about a year ago.

Winter loss survey. Average loss in a region when counting all reporters.

Then, we asked about Summer losses. This was up to the first of August, so it’s not quite the whole picture of Summer, but it’s close. Average loss in a region when counting all reporters.

Then we asked about the Spring and Summer honey crop. We take into consideration that some regions, or parts of some regions don’t have a Spring crop because it is used by the bees for buildup, and parts of some regions don’t have a Summer crop as the honey flow is mostly over by the end of Spring. With that in mind, we asked if the crop was below their average, average, above their average or if they even had a Spring or Summer crop.

Combining the two – below average and just average, we get a picture of the situation of surplus honey by the end of Summer. Dry conditions in much of the country have beekeepers uneasy about harvesting a Fall crop, first because there may not be one, and second, because that may be the Winter food for their bees. So, the combined “below and just average” for regions –

What you have to be aware of is which states are in each region, and what each contributes to the overall honey crop of the U.S. each year. For instance Region 1 – New York; 3 – Florida; 4 – Minnesota, Michigan; 5 – N. and S. Dakota, Montana; 6 – Texas and 7 – California. Combined, these states produce more than 70% of the U.S. honey crop almost every year. A good guess for this year’s honey crop is that it is going to be short, especially in regions 4 and 5. Right now, before the Fall crop, and even some of the harvestable Summer crop not in yet, it’s hard to say, but being down more than 25% from the ‘average’ crop isn’t outside the realm of possibility. However, what constitutes an ‘average’ crop is difficult to say anymore, with more and more beekeepers putting their focus on pollination and bees rather than producing a honey crop. So, don’t be surprised when more than 80% of the honey consumed in this country this Winter and next year is off-shore honey, and not yours.

We also looked at queen replacement problems. 70% replaced less than 10%, 22% replaced between 10 and 50%, 8% replaced, more of their queens this season because of failure. This is a substantial improvement over last year’s queen loss record.

By: Peter Snyder We are pleased to report that beekeepers in the United States have a new ally in the battle to identify a…