A number of seed and oilseed crops happen to be good sources of forage for bees. This group includes safflower, sesame seeds, and white mustard. These are typically grown as annuals.

Safflower (Carthamus tinctorius)
A member of the daisy or composite family, safflower was apparently native to Eurasia. Also known as false saffron, it has been used to adulterate saffron. The flower heads are sometimes used as a dye. Production of safflower in the U.S. has increased greatly since the 1940s.

Safflower seeds are eaten by humans and animals. They contain around 24% oil, depending on the variety. The non-spiny types are the best oil sources and are also preferred for flower gardens.

Used for cooking and salad dressings, the oil is very low in cholesterol. It is found in various products, such as lamp oil, paints, varnishes, resins, and medicines. The oilseed cake makes a good livestock feed.

Safflower Description
Numerous varieties of this erect, two-to-five-foot tall plant are available. The spiny types feature bristles or spines along the leaf edges.

The large, alternate, toothed, thistle-like leaves vary considerably in shape from ovate or oblong to lanceolate or elliptic. The width is about equal to the length.

Blooms appear mostly in August and September. The bisexual, tubular flowers can be orange, reddish-orange, or various shades of yellow. Typically, each plant bears about five thistle-like flower heads, which taper downwards. These flat, globe-shaped heads are over an inch wide. They’re surrounded by prickly, yellow-green bracts.

Each head contains 15 to 50 four-sided seeds. Resembling miniature sunflower seeds, these are 1/3 inch long. The color ranges from gray to pearly-white. Seeds are ready to harvest when nearly all of the flower heads are dry.

Growing Safflower
Safflower needs a growing season of 120 days or so. Tolerant of heat, this warm season crop is quite suitable for dry climates, such as that found in the Great Plains and New Mexico. It abhors high humidity and high rainfall.

Requiring full sun, this is salt tolerant. Most average, well drained soils are suitable. The ideal pH is six to seven.

Safflower plants can be started early indoors. To limit damage to the roots during transplanting, grow these in peat pots. Transplant when the danger of frost is past.

Safflower can also be direct sown once the soil is warm. Prepare the spot well, adding fertilizer and organic matter before planting. These should be planted ¼ to one inch deep, depending on the soil type. Space the plants a foot apart with 1½ to two feet between rows.

Allow the plants to dry out slightly before watering. No additional fertilizer is needed after planting.

For the most part, safflower is unbothered by pests. Potential disease problems include mildew, root rot, and anthracnose.

Safflower doesn’t typically bring a huge honey surplus. This is considered a major honey plant in the West and Southwest, particularly the Great Plains and New Mexico. The honey has a mild flavor.

Sesame (Sesamum indicum or orientale)
Cultivated since ancient times, sesame was used by the Romans and ancient Egyptians as well as by those in the Orient. Of unknown origins, it is believed to be native to Africa and Asia.

Made with sesame seeds, benne wafers have been a traditional dish in the Low Country of South Carolina since Colonial times. Sesame was grown by Thomas Jefferson. Presently, a small amount of sesame is grown in the U.S. Although the plants have occasionally naturalized, they generally aren’t persistent.

Both the roasted and raw seeds are used in foods, particularly as toppings for baked goods. Crushed seeds are made into confections. The seeds yield up to 50% edible oil, which is used in cooking, salads, margarine, shortening, and as a flavoring.

The oil has various medicinal uses and shows up in a number of products, such as paints, lubricants, soaps, and perfumes. Oilseed cake is fed to animals.

Description of Sesame
A member of the pedalium family, these vigorous, erect, bushy plants can vary in height according to the variety. They’re mostly one to two feet, but taller varieties can reach six or eight feet. The hairy, square stem is furrowed.

Gray fuzz covers the deep green leaves. Sometimes rough, the foliage is typically three to five inches in length. The upper leaves are almost lanceolate, while the lower ones are lobed and broad to oblong.

One inch in length, the bell-shaped flowers resemble those of foxgloves. They open on spikes or in groups of two or three from the leaf axils. The corolla is reddish to white.

The velvety, beaked, two-valved, hairy, grooved seed pods are either ovoid or oblong. They split once the seeds are ripe. The pods contain numerous brown, black, or white seeds. Either hairy or rough, the small, flat, broadly egg-shaped seeds are 1/8 inch in length. 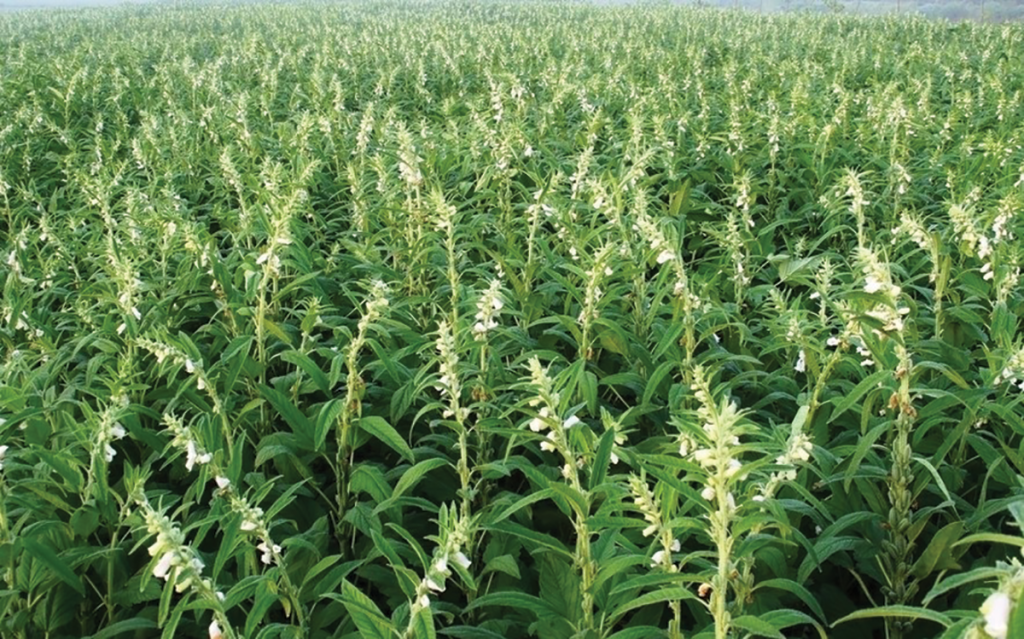 Growing Sesame
Widely cultivated in Asia, this is grown mostly in warm climates, particularly tropical and subtropical areas. The crop is suitable for higher elevations.
Sesame prefers a hot, dry climate and does well in the South. This generally requires a long growing season of about four to five months. However, quicker maturing varieties are available. It is usually grown in zone seven or higher.

Extremely high temperatures can lead to a poor fruit set. The seeds are ready to harvest when the lower capsules on the stems turn yellow to light brown. Harvest should be done before the pods open.

This tender annual is easy to grow from seed. For areas with short growing seasons, it can be started indoors. For bee forage, stagger plantings every couple weeks for a total of three to four sowings.

Grown much like soybeans, sesame is generally sown about ¼ inch deep. They should be planted six inches to 1½ feet apart, depending on growing conditions and the variety. Prepare the soil well before planting, and add fertilizer and organic matter before sowing.
Let the soil dry out slightly before watering. Sesame seed generally has few problems.

Bee Value of Sesame
Sesame blossoms are eagerly sought by bees. The plants provide a lot of nectar as well as some pollen. In addition to the nectary within each blossom, extrafloral nectaries are located at the base of the flower stalks. The nectar flow is best after a rain.

This provides a moderate honey yield of around 40 pounds per colony. The very high quality honey can vary in color from light or clear to amber or dark. Slow to granulate, this has a fine texture. 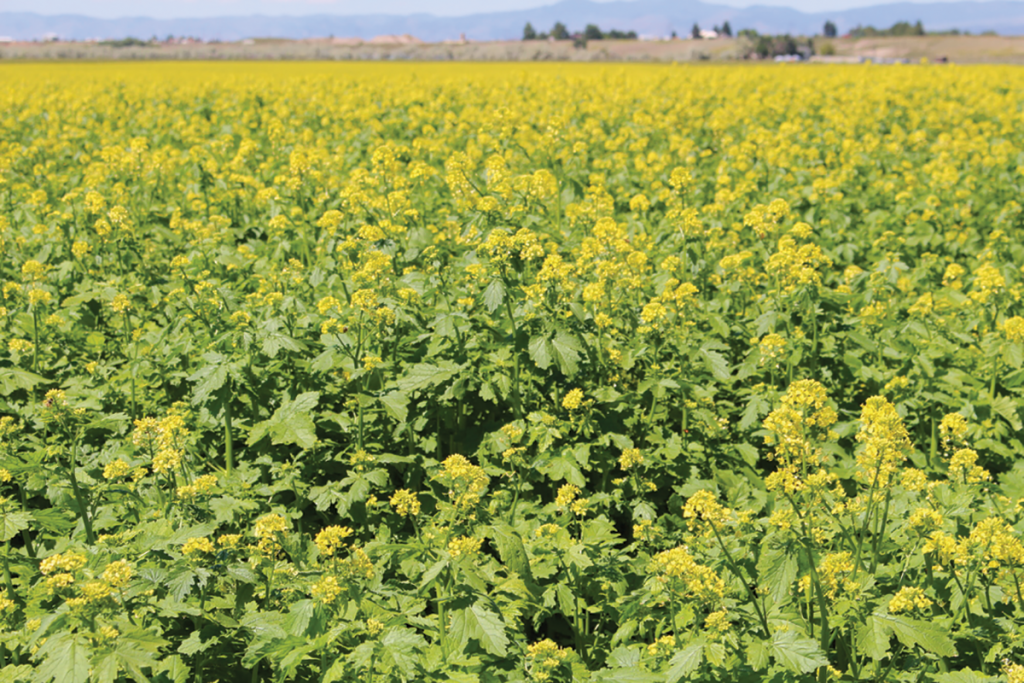 White mustard (Sinapsis alba or Brassica alba)
Also known as yellow mustard, this is a source of mustard seed and oil. The plants readily self sow. The seeds are viable for four years.

A member of the crucifer or mustard family, this is related to rape or rapeseed. White mustard seeds are used to make mild mustards and pickles as well as for sprouts. The plant was introduced from Eurasia.

Where Found
In addition to being cultivated, white mustard has naturalized in all states except Nevada, Oklahoma, Arkansas, Georgia, South Carolina, Virginia, and Kentucky. Preferring moist sites, the plant is found in waste places, disturbed sites, and along roadsides.

Description of White Mustard
Sometimes hairy, this erect, Winter annual features thick, branched, spreading stems that can be angular or hairy. It is typically 1½ to four feet tall. The stalked, toothed, pinnately divided leaves grow to 2¾ inches in length and are half as wide.

The seed heads are white and bristly. These yield small, spherical, white seeds about the size of a millet grain. The seed pods remain intact unlike those of black mustard. They’re ready to harvest once the pods begin to turn yellow.

Several varieties are available. In warmer areas, this can be planted in the Fall. Elsewhere, it is usually sown during the Spring. White mustard can bolt and fail to produce a good crop if the seeds are planted too late in Spring. Very easy to grow, this species will likely need weeding.

White mustard seeds can be started early indoors or in a cold frame. However, they’re usually direct sown. Prepare the soil well and add organic matter and an all purpose fertilizer before planting.

Seeds can be broadcast or sown in rows. Plant seeds 1/8th inch deep and ¾ feet apart.

Although the crop is tolerant of dry soils, keep this evenly moist for best results. Otherwise, it can’t bear a good crop of nectar, pollen, and seeds. To promote flowering, the plants can be pinched back.

For most varieties, additional fertilizer won’t be needed since this is a quick maturing crop. White mustard typically encounters few pests and diseases other than flea beetles, aphids, and slugs.

The nectar is easily accessible to bees. Plants yield quite a bit of nectar, up to 1.1 mg per blossom daily. This contains 50 to 60 per-cent sugar concentration.

White mustard can bring a good honey crop of 25 to 100 pounds per colony. The honey can vary in color, but is typically light colored to mustard yellow. When first extracted, it can have a mustard-like aroma.

Although the flavor is initially so strong it can burn the mouth, this mellows with time. Granulating rather rapidly, the honey should be extracted promptly. It has been known to ferment.

Related Species
A relative of white mustard called charlock (Sinapsis arvensis or Brassica kaber) is also a good plant species for bees. The species is also known as wild mustard and crunch weed. Considered a great honey plant, charlock is a common weed throughout the U.S. The habitats include fields as well as disturbed sites and waste ground.

Introduced from Eurasia, charlock is a hairy or bristly, rough annual, 1½ to 2¾ feet in height. The rough, hairy, lobed, upper foliage is 1¾ inch long. Especially bristly, the lower leaves are toothed and much smaller.

The bright yellow blossoms open from May or June to August or so. They resemble those of the other mustard family members. These contain six stamens, two of which are shorter than the others.

Charlock seeds are used pretty much like those of the various mustard species. They’re made into mustard and used for sprouts.

This species provides both nectar and pollen. Nectar is located at the base of the blossoms.

Charlock is the source of a top quality honey, which is generally light colored, mostly water white to amber. Though usually mild flavored, it can sometimes burn the mouth.

However, it becomes mild over time. The honey is ideal for making creamed honey.

Like rapeseed and white mustard honeys, this should be extracted right away for it tends to crystallize. Storage in a dark place can slow the process.

Connie Krochmal is a writer and a beekeeper in Black Mountain, North Carolina.