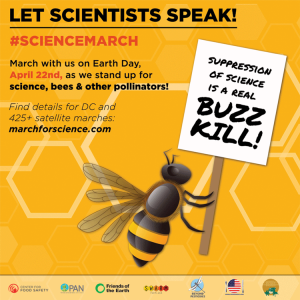 Honey bees, unlike marchers, stay inside when it pours down rain. Here in DC, advocates for pollinator research got soaked, instead.

The March for Science was controversial among scientists, in part because science needs to be the pursuit of truth, not of political expediency. However, bee research has already come under the knife in the United States (anyone remember the Tucson Bee Lab?) and is operating under difficult conditions now. At some point, if it bears value, you might need to make sure that decision makers factor that into their mathematical models.

Bees, including natives, were prominently featured in among the speakers and scattered among the marchers: Sam Droege (https://www.usgs.gov/staff-profiles/sam-droege) was on the main platform, and there was even a “Bee Swarm” sponsored by the Pesticide Action Network North America (and five other organizations). In 600 other cities (most considerably dryer) supporters of bee science were also present, pun-bearing signs in hand. 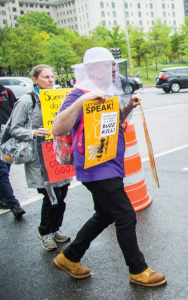 One of the issues that created some urgency among local beekeepers attending the March was the recent news that the USDA-ARS Bee Disease Diagnostic Service, offered free to beekeepers for 100 years, was on hiatus immediately and indefinitely. Members of our group connected with folks close to the issue, and learned that the Lab is unable to hire due to a government-wide order affecting all agencies except Defense and the Veterans Administration, even where there is already budget on hand and an existing staff slot in place. This is a case where beekeepers all over the country who need to know what is happening with their colonies might want to advocate not just for funding, but for the continued, common sense operation of a lab which has delivered a valuable and high-quality service for a century. I doubt that anyone would agree with all the issues raised by marchers across the country, but it is hard to credit the public benefit of hamstringing what has been successful and valuable for generations of widely divergent beekeeping practitioners. 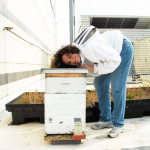