“We are getting near,” said Gandalf. “We are on the edge of his bee-pastures.” 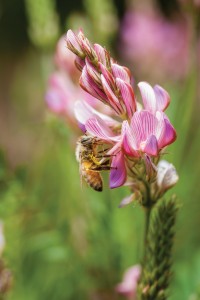 It started in early May. A dot of pink here, a glimpse of pink there. By June the fields were great blankets of pink stretching out over the surrounding northern Utah landscape. Standing on the edge of my bee-pastures, the low hum of millions of bees filled the air as they partook of the bounteous feast. The only thing on their mind right now was sainfoin.

Rewind to 2012. Like many folks, my journey into beekeeping began not only out of genuine interest in honey bees, but also out of concern for their wellbeing. CCD, mites, habitat loss, pesticides – it seemed everywhere I looked there was a new article discussing a new problem with our bees. Understanding that the fate of mankind is intertwined with the fate of our pollinators, I felt a strong urge to do everything in my power to help these magnificent creatures while having some fun at the same time. So with a skeptical nod from my wife, I set out on my adventure.

I spent the next year learning everything I could in beekeeping forums, books, classes, websites, and, for better or worse, YouTube. Luckily I had some unique factors to bring to the beekeeping table that would help shape my vision. For one, I had access to 24 acres of family-owned farmland; property that had sat fallow for years following the death of my grandfather. I also brought to the table an educational background in horticulture coupled with a professional background as an agronomist and seedsman for NaturesFinestSeed.com. Together, these factors helped me form the idea of “honey bee-pastures” – specialized pastures designed specifically for honey bees.

While the idea seemed new, I soon learned from my research that bee-pastures were a common concept, especially throughout the Old World. Today, organizations like the USDA-ARS Pollinating Insects Biology, Management, and Systematics Research Unit help educate the public on the benefits of these floral havens (Wood, 2010). Like pastures for other types of animals, bee-pastures are areas of land planted with the most desirable and beneficial forage for honey bees. But won’t bees find enough pollen and nectar on their own without the need of bee-pastures?
Because flight is costly both in terms and energy and time, a bee will not fly long distances if quality pollen and nectar sources are available close by (Couvillon, 2013). Of course bees will search the surrounding 8,000 acres if they need to, but if forage sources are abundant and appealing close by, large honey crops can be harvested and bee health is optimized.

The question was how to make this idea economically and environmentally sustainable, and what type of forage would I plant for my bee-pastures that would be appealing enough to persuade my girls to stick close to home? The answer to both questions was found in the graceful pink blossoms of the sainfoin plant.

Ask most people about sainfoin and chances are their reply will be “sain-what? Never heard of it.” Native to the Mediterranean regions of the Middle East and Europe, sainfoin (Onobrychis viciifolia) was introduced to America as livestock forage, but was rarely planted until improved varieties were developed in the 1960s. As a long-lived perennial legume, sainfoin packs nutrients comparable to the far more famous alfalfa. Sainfoin also requires only half the irrigation water needed by alfalfa, making it especially alluring throughout the drought-stricken West. While it might not match the yields seen with alfalfa under irrigated conditions, in dryland situations sainfoin has been known to out-yield alfalfa in hay production. What’s more, sainfoin can be grazed by ruminant livestock without risking bloat thanks to its high levels of condensed tannins, something livestock producers wouldn’t dare do with alfalfa.

But for me, the most intriguing aspect of sainfoin was its potential as a honey plant. During my research I came across phrases like “copious amounts of nectar”, “pollen produced in abundance” (USDA-NRCS), “honey made from sainfoin is of the finest quality”, and “attracts ten times more honey bees than white clover” (Pellett, 1920). This information was exciting, but in order for my project to be financially justifiable, I would need to be able to eventually harvest my sainfoin and sell the hay. I needed a “dual-purpose” bee-pasture. With alfalfa, nutrient levels determine how much it sells for, and these levels quickly drop the more mature alfalfa becomes. It’s for this reason producers typically cut it before the alfalfa is allowed to bloom, making it useless as a reliable honey plant.

This is where sainfoin has another virtue. As it matures sainfoin retains much of its nutrients and palatability, and doesn’t drop its leaves the way alfalfa will in later growth stages. This means honey bees and other pollinators can work sainfoin to their heart’s content, typically from May to July.

After completing its bloom cycle, sainfoin can then be harvested and sold as good quality legume hay. While regrowth after cutting is slow, there is the possibility of additional cuttings if irrigation or rainfall is adequate, especially with the newest varieties of sainfoin.

With my plan in place and crop selected I began preparing the fields for planting. Because the area had sat fallow for many years, tillage was needed to break up the thick sod that had formed and to remove the well-established weeds. This was accomplished in the fall of 2013. That next spring, the fields were disc harrowed and cultivated to produce a firm, weed-free seedbed.

Because my fields would be non-irrigated, I planted in early April to take advantage of our typically wet May. I also decided to invest a little more money on the newest variety of sainfoin seed on the market – ‘Delaney’ – which boasts higher yields and the possibility of multiple cuttings. Using a seed drill, the sainfoin was planted at a rate of 34 lbs./acre PLS (pure live seed) immediately after being inoculated with a sainfoin-specific rhizobium. The rhizobium would create a symbiotic relationship within the root nodules of the sainfoin and assist with nitrogen fixation. Essentially, my sainfoin would be creating its own fertilizer, eliminating the need for additional inputs. Then like every dryland farmer before me, I waited and prayed for rain.

The rains did come that Spring and so did the sainfoin. At the same time, my new Carniolan nucs were busy giving me my first hands-on lessons in beekeeping. “Don’t expect any honey your first year,” I was told repeatedly. I wasn’t, but would soon be pleasantly surprised.

The sainfoin seemed to compete with the weeds very well, and I was amazed at its toughness. I dug up a plant one day for further inspection and found a large taproot shooting straight down into the soil, a handy feature to have in the second driest state in the nation.

In one particular field – nicknamed “the white knoll” – decades of erosion had washed away all the dark topsoil leaving behind a white, nutrient-barren hill. But the sainfoin didn’t care. It established on this white knoll just as thick as the other fields. My father couldn’t remember a time in his life he’d ever seen something thriving in that field until the sainfoin showed up.

While the sainfoin never grew tall enough during its first year to make a harvestable crop, it did flower from mid-June to August of that year. My bees seemed to thrive during that time and by September each colony had fully established their two deep brood chambers, and each had filled a deep super. One colony had even filled two deep supers with the lightest colored honey I’d ever seen. That honey would later go on to tie for first place at my local bee club’s annual honey tasting contest. For my first year I was quite pleased. Sainfoin’s reputation as a superior honey plant had been proven.

Now in its second year, my bee-pastures have far exceeded my expectations. As of writing this article, the sainfoin is in full-bloom and has grown between three and four feet tall in a nearly weed-free stand. It began flowering the first week of May and should be reaching its peak mid to late June, tapering down until it’s harvested in July. The fields have received no irrigation (although the above-average rainfall this Spring helped) and have not been treated with herbicides, pesticides or fertilizer. It seems as far as sustainability and input-reduction are concerned, sainfoin fits the bill quite nicely in these arid Rocky Mountains.
My bee colonies have doubled in number since last year and continue to thrive. Not only do the sainfoin fields attract every honey bee within a two mile radius, but native bees and other pollinators are commonly seen foraging the pink blossoms. Deer are also frequent visitors; crossing over the neighboring alfalfa fields to help themselves to my sainfoin. Game birds such as turkey and pheasants have become regular residents. I may have found another use for sainfoin – wildlife food plots.

Do you have some acreage to spare? Interested in establishing a sainfoin bee-pasture? There are a few things you need to be aware of. First, sainfoin does best in high pH soils. This has limited its use in areas east of the Mississippi and parts of the Pacific Northwest. For folks wanting to try sainfoin in these areas, I highly recommend planting a small test plot first and testing your soil as amendments may be necessary.

Next, be aware that sainfoin requires good drainage and won’t tolerate wet soils, flooding, or high water tables. I also recommend using one of the newer varieties such as ‘Shoshone’ or ‘Delaney’ for the best yields possible.
To maximize the lifespan of your sainfoin, avoid excessive irrigation and be sure to let the stand self-seed every two or three years to remain thick and vigorous. When properly managed, sainfoin fields can remain productive for decades. There are even reports of sainfoin stands in Montana surviving for over 60 years (USDA-NRCS).

Legend says it was sainfoin that filled the manger during the first Christmas, providing comfort and shelter to the newborn king. It’s been called “holy hay” throughout history, and its name literally means “healthy hay” in the French language. Jethro Tull, the English agricultural pioneer, referred to it as a “noble plant” (US Patent Office, 1851). Everyone who’s worked with sainfoin knows there’s something special about it, and it seems this ancient legume may have a very modern role to play in the future of agriculture and our honey bees.

Skylar Christensen is an agronomist and seedsman for Nature’s Seed and founder of Ephraim’s Choice Bee Farm. For inquires and price quotes on sainfoin seed and other bee-pasture seed blends, feel free to contact him at skylar@naturesfinestseed.com.