By: Charles and Karen Nielsen Lorence

If you have been around long enough in the beekeeping industry, the name Gene Killion not only rings a bell but it also inspires awe. Gene passed away on June 19, 2022 at the age of 98. With his perennial humor, Gene claimed he was (two years younger than) a centenarian and had been keeping bees since he was five years old. Gene’s family was a member of the American Beekeeping Federation since its inception. His father, Carl Killion, began the stellar bee hive inspection program in the State of Illinois and, in 1971, Gene took over from his father. He remained on the staff until 1990 when he retired. Fifty plus years had passed since the inspection program had begun! At the height of the program, he oversaw about ten inspectors. All the pioneers in the industry were Carl and Gene’s friends.
Gene was in the U.S. Air Force during World War II. When he left, he sold his honey to his father for 5¢ a pound and his father forewarned him, “Someday you will be selling your honey for $1.00 a pound.” Again, the Killions were on the cutting edge when they began selling pollen traps, were the first to sell pollen supplements and packaged their honey in plastic. They were the first to have a stainless steel extractor from A. I. Root.
The specialty of the Killion family was section box comb honey. They had a very unique method of production and produced thousands of sections which were sold around the nation. The highlight came in 1951 when they broke the all-time record by averaging fourteen comb honey supers each from 100 hives. One hive actually produced seventeen supers. The small town of Paris, Illinois was not even aware of it as the honey would be shipped out of town within the confines of a semi.
Each year in October, HONEY WEEK is celebrated in Paris, Illinois. This commemorates the anniversary of the issuing of a bee stamp in 1980. Gene’s father Carl worked tirelessly with the U.S. post office, as did Gene, as his father aged. The Killion family has always been a well respected family in Paris, IL and continued to impact the beekeeping industry in the United States.
In the late 1940’s, Gene studied under Dr. Bert Martin of Michigan State University to enable him to be a judge of honey. Over the years, Gene was the chief judge of many national honey shows, writing several articles on how to judge honey exhibits.
With this fine history behind him, it was in 2016 that Gene was attending the American Beekeeping Federation convention in Ponte Vedra, Florida. There he was giving a presentation and met the chef. They became fast friends and Gene helped to make Sawgrass Marriott more natural-food oriented.
A cute story that was remembered by Gene is when his father, Carl, built a camper truck to drive to the bee convention down in New Orleans at the Roosevelt Hotel. It just so happened that the major league baseball convention was being held at the same time. Needless to say, Gene and his brother were mesmerized by meeting many of the ball players and getting their autographs rather than going to the bee meetings with their mom and dad.
Gene is survived by his son Mark in Paris, Illinois. Condolences can be sent to P.O. Box 96, Paris, IL 61944. 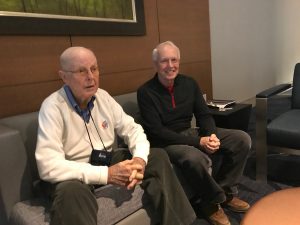 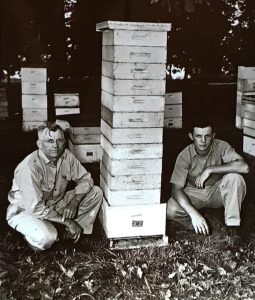