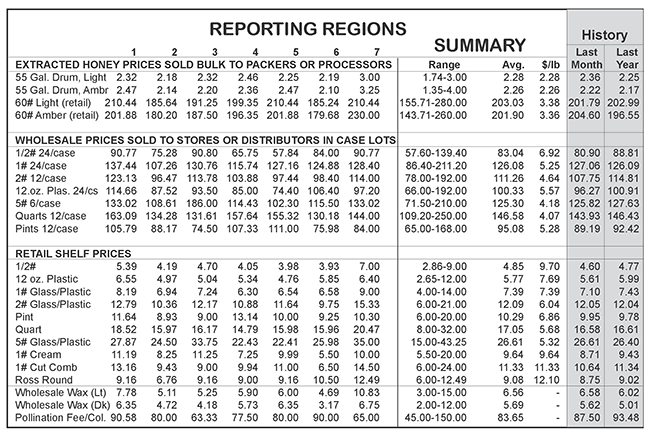 We checked in with our reporters this month to determine how good, or how bad their Spring weather had been, and what effects this has had on their bees and their beekeeping work, plus we asked for overall combined Winter/Spring colony losses. The responses were pretty uniform by region, but as you can imagine, quite different between regions, except it was cold and wet almost everywhere.

Region 1. Across the board spring was too cold, with far too much rain, both in amount and number of times it rained. As a result, bees are way, to somewhat behind where they should be, and bee work is the same. Average Winter/Spring loss was 40%.

Region 2. Cold and wet. Enough said. This means bees are somewhat to way behind schedule, but most of the bee work is pretty close to where it should be, all things considered. Losses averaged 27%.

Region 3. Too cold, too much to just enough rain though means the bees are somewhat behind, with some way behind, and bee work somewhat behind to about where it should be, which is good news. Losses were the lowest for all regions at 21%.

Region 4. It was cold in region 4, with rain just enough bordering on too much for most of the region. Bees are about where they should be but a bit behind, and beework, too is a bit behind but close to where beekeepers think they should be. Losses averaged 29% across the region.

Region 5. It was cold in region 5, but moisture bordered on just enough to not quite enough for most. This got the bees to just about where they should be, but some are lagging, and beework is actually ahead of schedule for many this season. Average losses were 42%.

Region 6. Dry, more dry and a little bit cold this spring. And not nearly enough rain for anybody. This means the bees are somewhat behind waiting for nature to catch up, and beework is the same. Losses were 31%.

Region 7. It was cold in region 7, too, but they had, overall enough rain, but it came in buckets when it did causing problems in much of the region. The bees are about where they should be, but some are behind, and beework is too. Average losses here were the highest of all regions at 46%.

Looking at average losses and the regional map, these losses correlate quite well with average Winter and Spring stresses. Cold in the north where losses are highest and warm in the south where the averages are lower. A conclusion one scientist we talked to came up with was that pretty much all colonies suffer the same stresses from Varroa and their viruses, which produce a somewhat predictable baseline of losses in the range of 20+%, but it’s the environment that causes the differences above that. Perhaps that’s a pretty good assessment.